Dion DiMucci, one of the early fathers of rock’n’roll, has been making records since 1957, and turned 81 in July. Dion, as he’s best known, has gone through several musical transformations in his recording career, but in late 2005 he released Bronx in Blue, the first of half a dozen albums that have highlighted his guitar skills and his command of blues and traditional country music. His records since then, among them Son of Skip James (2007) and Tank Full of Blues (2012), showed him in strong voice and let his guitar playing shine.

His latest album, Blues with Friends, is released by Keeping the Blues Alive Records, a label founded by guitarist Joe Bonamassa and his manager, Roy Weisman, as a home for new and established blues musicians. Bonamassa is one of the guests on the album, which comprises 14 songs Dion co-wrote and matches him with well-established musicians, a number of whom are 1960s-generation rockers influenced by Dion and his peers. Dion sings and plays guitar; co-producer Wayne Hood plays most of the other instruments on the rhythm tracks. 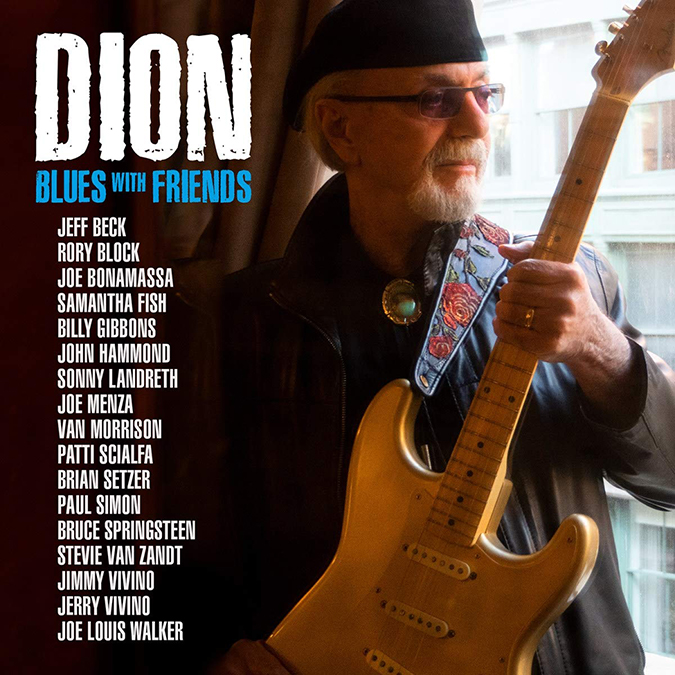 Bonamassa’s smoking lead guitar in “Blues Comin’ On” gets things off to a roaring start, with Dion’s rhythm guitar and Hood’s blues shuffle on drums keeping things in the pocket. Hood’s solid bass playing keeps the music flowing, and Bonamassa’s slide solo ups the energy level. Even with Bonamassa’s firepower, though, Dion’s voice gives the song its core and authenticity. He sings with an honest conviction that doesn’t call attention to itself, and shows an honest understanding of the blues.

There’s no shortage of guitar talent here. Jeff Beck brings his skills to the country-tinged “Can’t Start Over Again,” enhancing Dion’s vocal with a solo of understated elegance. Brian Setzer’s Gretsch guitar injects zing into the gospel rocker “Uptown Number 7,” Billy Gibbons does some of his best straight blues playing in years in “Bam Bang Boom,” and in “I Got the Cure,” Sonny Landreth reminds us that he should be better known.

Dion shows off his own lead-guitar chops in “My Baby Loves to Boogie,” which also features searing blues harp from John Hammond. In one of the strongest tracks, “Told You Once in August,” Hammond and Rory Block trade acoustic slide-guitar licks behind Dion’s powerfully effective singing. Block’s harmony vocal gives the song a lift, and adds a hint of gospel fervor.

The assists from all those marquee names doesn’t prevent this from being very much Dion’s record. Van Morrison duets with him in “I Got Nothin’,” and his heartfelt performance doesn’t outshine or overpower Dion’s. Their voices are well matched, enhanced by Joe Louis Walker’s understated guitar lines. Patti Scialfa sings a haunting background vocal in “Hymn to Him,” a song from Dion’s Christian-rock days that ends the record on a strongly spiritual note, and includes a beautiful, Duane Eddy-style guitar solo from Scialfa’s husband, Bruce Springsteen. 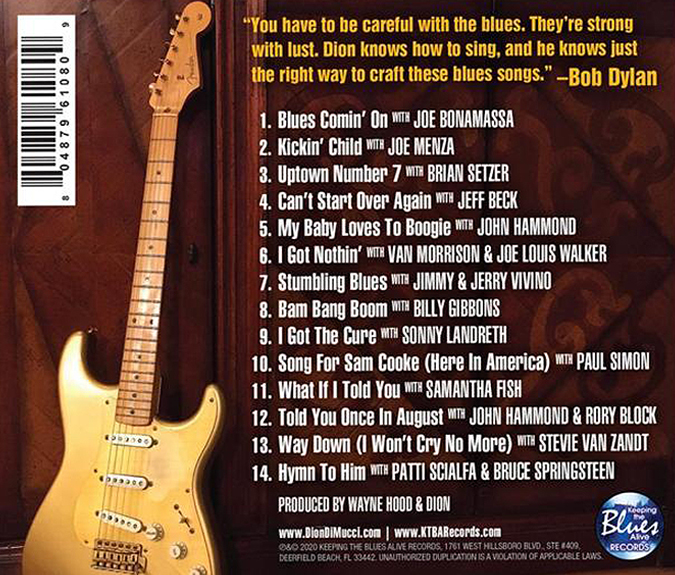 “Hymn to Him” is one of the album’s several detours from the blues. “Song for Sam Cooke (Here in America),” a duet with Paul Simon, is reminiscent of Dion’s folk-rock albums of the 1970s as Carl Schmid’s violin adds a melancholy touch to Dion’s memories of his friendship with Cooke and their trips together through the South. “Way Down (I Won’t Cry No More)” has garage-rock punch thanks to Stevie Van Zandt’s razor-edged guitar. On balance, however, the album remains true to the Blues in its title.

Furnace Manufacturing, of Alexandria, Virginia, pressed the two-LP edition of Blues with Friends. I found that Furnace needs to pay more attention to quality control. Disc 1 had a slight warp that didn’t affect play, but a scratch at the start of “Blues Comin’ On” produced a click throughout the song’s first minute. And side D of disc 2 had no label. Otherwise, the surfaces were quiet, but these problems were disappointing.

It’s a minor criticism, but I occasionally wished for more of a sense of group interplay in the rhythm tracks. Wayne Hood is a fine, versatile musician, but individual players reacting to each other would have perhaps given these performances a bit more spontaneity. Still, Dion’s guitar drives these songs, and he sings with strength and confidence throughout. With luck, he’ll continue to make music for a while yet.