Illusion is the first of all pleasures.
-- Oscar Wilde

Reference. The word has been trotted out and flounced so shamelessly by so many audio manufacturers and appended to the names of so many products that, as with cat dander and country music, I’ve managed to build up an immunity to it. However, with the right associations the word still carries impact -- as, for instance, when an industry name as well respected as Simaudio produces an “R”-word product like the Moon Evolution 810LP dual-mono reference phono preamplifier, which the manufacturer describes as “an all-out assault on phono preamplification” engineered and built without consideration of cost. As you might expect, the 810LP is a serious piece of kit in terms of engineering, build quality, and, alas, price. At $12,000 USD, it’s not for the faint of heart or wallet, though by high-end standards $12k is by no means stratospheric. Still, I shy away from calling it a “bargain.”

To say that the build quality of the 810LP has something of the epic about it is not entirely hyperbole. The chassis is constructed from thick-gauge aluminum finished in a not-unappealing black crinkle. At almost 19”W x 4”H x 17”D and weighing 40 pounds, the 810LP is on the verge of not playing nicely with some equipment racks. On its shelf of my three-legged rack the 810LP was a snug fit, requiring careful positioning so that my cables could skirt the rack’s rear leg. In its final resting place, the 810LP was way left of center -- that didn’t bother me a whit, but those with OCD and/or racks with central pillars should consider themselves warned.

The stolid boxiness of the black casework is nicely relieved by the faceplate’s two gently curving silver cheeks -- a Simaudio signature found on other Moon Evolution models -- and long heatsink strakes that run front to back on either side. A stainless-steel spike (supplied) screws into the solid metal post at each corner, the latter finished in the same brushed silver as the front panel. Though blunted, these spikes still managed to dig neat little channels in my platform, so move your 810LP slowly and gently when positioning it -- i.e., exactly the opposite of how I went about it.

Dead center on the front panel is a small Standby switch (the master power switch is on the rear), and directly above that a small, unobtrusive blue LED that indicates when the 810LP is powered up and ready to play. The rear panel is utilitarian, with both balanced and unbalanced inputs and outputs, a 12V trigger input/output, the requisite grounding connection, and, at far right, the IEC plug and aforementioned power switch. Finally, there’s a cheeky little addition in the form of a four-pin XLR connector, reserved for the day “when an external power supply will be made available.” While I’m all for external PSUs and the benefits derived therefrom, if I’d just forked out this kind of reference-level cabbage, I’d be somewhat choked to read in the manual that an upgrade can make it better. Talk about a kick in the plums. Expecting more for 12 yards? Read on.

While the 810LP may not win beauty contests, rapping the casework and lifting the bloody thing will tell you it was purpose-built. Inside, Simaudio has managed to include some very tasty bits. The power supply is herculean, beginning with a pi-type filter with 35,200µF of capacitance and dual choke inductors. Low-voltage DC regulation is accomplished using Simaudio’s M-LoVo, a sophisticated, proprietary, four-stage circuit that employs both ICs and discrete parts and yields what’s claimed to be “an exceptionally fast, precise and stable DC voltage.” The power-supply voltage regulation also includes “Independent Inductive DC Filtering” -- more simply, one inductor per chip/op-amp in the audio circuit’s signal path -- for a whopping 24 stages all told. The result is a claimed noise floor of -150dB (relative to 1V, DC-100kHz), which is staggeringly low.

The 810LP’s audio circuit board is mounted on a five-point gel-based suspension to further damp vibrations, a technique Simaudio calls M-Octave; even the rear connector panel is attached directly to the main audio board and floats independent of the surrounding casework. This makes for a somewhat strange sensation when connecting cables: The panel moves slightly when pressure is applied, which the manual points out is “normal.” Finally, Simaudio has kept the signal paths as short as possible throughout, which has led to something of a compromise in terms of access to the DIP switches with which the user sets the phono-stage impedance, gain, and equalization curve. The switches are on the bottom plate, which means that the 810LP must be lifted whenever any of these settings are adjusted -- with my rack, something of an ordeal. This could be a pain in the ass for users with more than one cartridge in rotation, and/or who like to experiment with various settings.

On the other hand, the 810LP is easily the most flexible analog source component I have encountered. It offers 64 separate impedance loads ranging from 12.1 to 47k ohms, 16 capacitive loads, a whopping 16 gain settings from 40 to 70dB, and two equalization curves. I can’t think of a cartridge that the 810LP couldn’t accommodate. Providing this level of flexibility while keeping the signal paths short is laudable, and worth the extra effort at the user end.

The Moon Evolution 810LP took a long time to break in. I had over 200 hours on the review sample and I think it would have still continued to improve given another few hundred. As is my practice with source components, I kept the 810LP powered up at all times, and I caution anyone who buys one to do the same. I had to shut it off twice to move some furniture, and both times it took three to four hours of constant playing before it came back on song -- and this after more than 100 hours of burn-in.

The 810LP offers two equalization curves: RIAA and IEC. I used the latter throughout this review. The IEC curve simply acts as a noise filter below 20Hz. That this helps those, like me, whose listening-room floors are hardwood over wood beams was evinced by the resulting stillness of my usually slightly jittery woofers.

More than any other source component I’ve ever heard, the Simaudio Moon Evolution 810LP made my speakers seem to disappear -- and that was right out of the box after being plugged in for only ten minutes! Over time the soundstage got even deeper and incredibly wide, with the unerring ability to clearly place and delineate individual musicians within a fully fleshed-out acoustic. And for the first time, my stand-mounted monitors got very close to describing a truly life-size image. Peter Gabriel’s Passion, his music for the soundtrack of The Last Temptation of Christ (200gm LP, Geffen/Classic), besides being musically compelling and authentic world music, is a large slice of audiophile ear candy. The 810LP placed instruments precisely on an incredibly layered and ordered soundstage with massive amounts of acoustic space and air. Never before had I heard this record with so much separation between performers -- and when a featured soloist was out in front of the other musicians, the distance between them was palpable. This effect was particularly compelling with good classical recordings in which soloists were clearly spotlit against the backdrop of a full orchestra, itself distinguishable as individual sections and players rather than a homogenized wall of sound.

To test a component’s ability to reproduce subtle spatial cues and microdetails that can easily get lost in the mix, I often spin Julian Bream’s Popular Classics for Spanish Guitar (LP, RCA Living Stereo LSC-2606). The sounds of Bream’s fingers moving on the guitar neck were amazingly clear, and his careful modulation of volume was utterly convincing -- as was his subtle breathing as he played. When he struck the strings with gusto, the entire acoustic lit up -- I could hear the room as sound bounced around it. I was also dumbfounded by the immediacy of the sound; there just didn’t seem to be anything in the way of it -- no blunting of tone and texture -- and yet it all seemed very natural, devoid of analytical iciness.

This transparency/clarity paired very nicely with well-made live recordings. I listened to one of my favorites for music and sound, Ravi Shankar and Ali Akbar Khan’s In Concert 1972 (LP, Apple SVBB3396). The sound of the audience was clear and energized, commingling so naturally with the sounds of the instruments that it was spooky. I could clearly hear sound emanating and blooming from each instrument, with all the overtones and harmonics of Shankar’s sitar preserved. The illusion of being part of the event was stronger with the 810LP than with any source component I have heard to date; once heard, it made other presentations sound artificial. 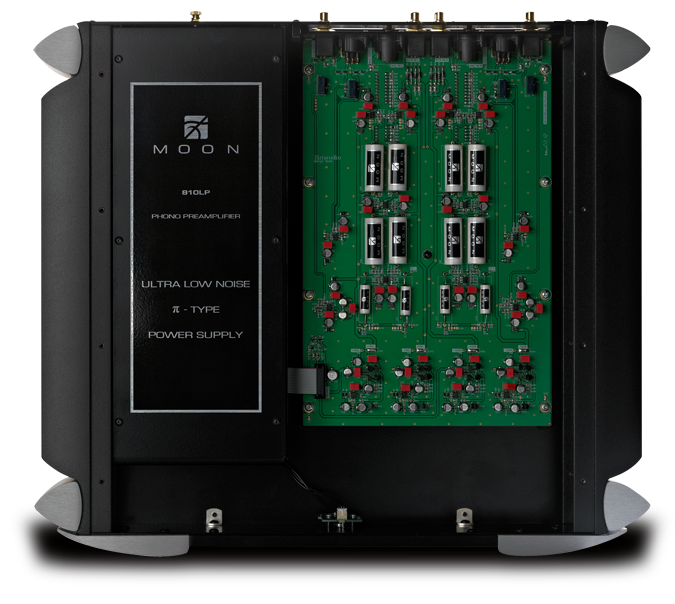 The 810LP’s sound was very linear; i.e., devoid of tonal aberrations and frequency bumps. Switching back and forth between the Simaudio and my Herron VTPH-1 tubed phono preamp ($3650), I noticed that the Herron hardened a bit in the upper midrange, especially with violins and trumpets. The Herron is fast, better with transients than most tubed models, but the solid-state 810LP was better still; even more surprisingly, instruments such as cymbals had more shimmer, longer decay times, and much more textural nuance and body. For a tube lover like me this was shocking, but I haven’t heard a tubed phono stage that can better the Simaudio in this regard. There was no fatness, no exaggeration, no golden glow -- just the right amount of texture, tone, and instrumental bloom for each recording, no matter what I played.

Bottom-end heft, too, was impressive, lending rock and pop great power and momentum. In Rush’s live Exit . . . Stage Left (LP, Anthem ANR-4-1035), Neil Peart’s drums were explosive and imbued with incredible speed, the kick drum easily distinguished from the rest of the kit. “With My Own Bare Hands,” from Ween’s La Cucaracha (180gm LP, Schnitzel srlp1255211), was suitably edgy and gritty, which served the punkish nature of this track perfectly, while the better-produced Quebec (LP, Sanctuary 06076-84591-1) shone through -- tracks like the tongue-in-cheek, mock-epic “Among His Tribe” sounded suitably grand and portentous. Basically, the Simaudio 810LP was indifferent to musical genre, rocking when the music called for it, delicate and light with softer, more intimate stuff. This adaptability took some time to manifest, however; the 810LP sounded somewhat tight for the first 100 hours or so. After about 150 hours, its top- and bottom-end extensions were phenomenal, and while the sound was still admirably controlled, there was much more pace and reach. This means you’ll have to log some not-inconsiderable playing time on it before it reaches its full potential -- but if you like what it does out of the box, you can expect it to get even better over time.

The Simaudio 810LP seems to combine the strengths of some of the best phono preamps I’ve heard and reviewed without falling prey to some of their weaknesses. The Esoteric E-03 phono stage ($6000), which I reviewed a while back, is a master of detail and control; the 810LP was even better at both, while delivering a much more textured and tonally rich sound. Conversely, where the Nagra VPS ($5995) is tonally rich and soulful, the 810LP was even more so, while also sounding far more transparent and immediate.

Whether searching for absolute sonic fidelity or questing for an emotional connection to the music we love and cherish, most of us end up assembling a sometimes-quixotic mixture of gear that creates the closest approximation of real music our pocketbooks and patience permit. At $12,000, the Moon Evolution 810LP phono preamplifier is not the cheapest way to create an entirely convincing musical event in my listening room, but to my ears it’s the best way. In it, Simaudio has created an effortlessly musical and utterly transparent window through which audiophiles can listen to and, more important, connect with their music. The word reference may continue to relentlessly rain down, but for me, the Moon Evolution 810LP will continue to be the parade.