My Little Fwend and My Double-Wide Equipment Rack

Last November, I accompanied Doug Schneider to the Warsaw Audio Video Show (read our coverage here). The AVS was wonderful -- a huge affair hosted by a city whose history goes back a thousand years. We found tons of new, exotic products, and the show -- and our coverage of it -- were raging successes.

On the first of AVS’s three days, we were leaving the PGE Narodowy sports stadium, which hosted a significant number of exhibits from the larger manufacturers. Doug had just finished telling me about the sometimes sketchy shuttle-bus service that would take us back to the hotel. As we exited the stadium, we spotted a bus just about to pull away.

“I’ll get it!” I yelled helpfully, and sprinted as fast as a man with two steel hips is able.

The large, flat plaza at the stadium’s entrance (exit for us) was ringed with a semicircle of portable spotlights, each about the size of a microwave oven stood on end. The spotlights pointed up at the stadium at an angle of about 45°, to illuminate the upper reaches of the walls. Except that one spotlight wasn’t working, and blinded by the other lights, I was unknowingly running toward that one at full trot.

That dark spotlight took me out at the knees. As I tumbled forward, I had no idea what had happened -- it felt as if I’d fallen into a hole. Anyway, from years of off-road motorcycling and Hapkido training (neither of which I’m much good at), I’m used to falling over, so I guess I automatically protected my head and extremities. However, my shins were barked on sharp-edged metal, my knees hit the ground hard, and it all hurt like a son of a bitch.

“What the fuck!” I howled, along with other obscenities. I was rapidly surrounded by people offering to help me back on my feet, but I felt it best to remain horizontal until I’d taken an inventory of possible injuries. A minute later, I came to the conclusion that although in pain, I wasn’t actually injured, and two people helped me up as Doug checked his phone for the nearest hospital.

The two Good Samaritans stayed with me until they were sure I was OK, and I soon learned that they were Marius Sundsåsen and Lasse Gretland, the principals of Little Fwend, the Norwegian manufacturer of an ingenious little automatic tonearm lift. 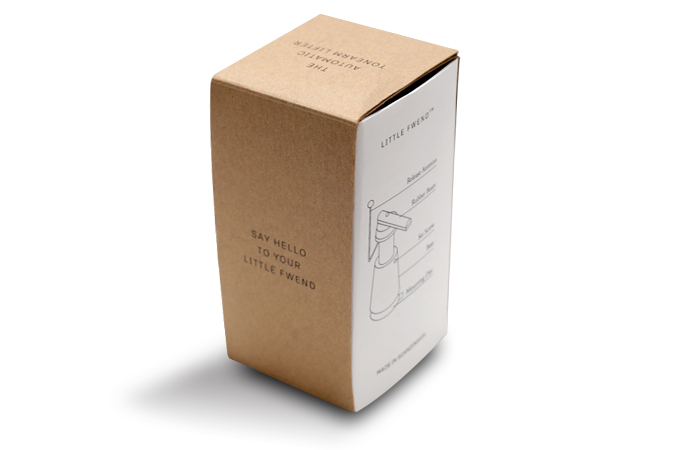 As we waited for the next shuttle bus, I dusted myself off and promised them a beer back at the hotel where, it turned out, all of us were staying -- and we arranged to review the Little Fwend on SoundStage! Ultra.

When I returned home to Canada, I unpacked my bags, and took stock of this little guy. The Little Fwend ($249 USD) comes brilliantly packaged in an origami-like, low-environmental-impact paper wrapper with an MDF-reinforced inner structure. This bit of cleverness just radiates Scandinavian ingenuity.

The Little Fwend itself is precision tooled to a jewel-like quality. It comprises a conical stainless-steel base that’s magnetized at the bottom, to secure it to an adhesive metal disc (included). Out of the base rises a stainless-steel pillar, its top portion consisting of a retractable platform cushioned with a layer of neoprene rubber. The pillar is held in place with a hex-head setscrew. Rising vertically from the platform is the trip wire, topped with a small brass ball to reduce its pokiness. 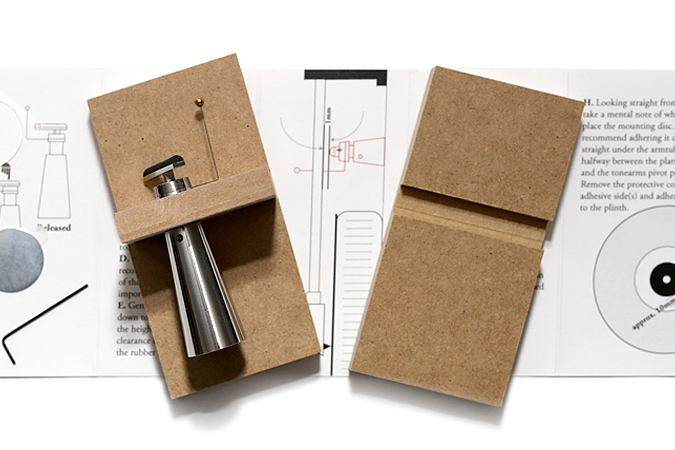 Setup is by necessity a touch fussy, like almost everything in the vinyl universe, but not too bad. First, you need to measure the height from the plinth to the bottom of the tonearm while there’s a record on the platter. This process alone requires a steady hand -- you need to maneuver a ruler between platter and tonearm without knocking your tonearm and its precious cargo, the cartridge, into orbit. Once you’ve got that measurement, use the supplied hex key to loosen the Little Fwend’s pillar from the base, then raise or lower the pillar until the height of the platform is about 1mm less than the distance between plinth and arm.

Or you can just eyeball the height and do a bunch of trial-and-error test fits. You might get lucky on your third attempt, as I did.

The pillar and the cylindrical shaft it occupies are machined to very tight tolerances. The fit is so precise that, with the single setscrew fully backed out, the pillar won’t just drop into the base. Instead, it slowly lowers itself, without benefit of a layer of grease or oil. Just this aspect of the Little Fwend’s manufacture gave me great confidence in its overall quality. 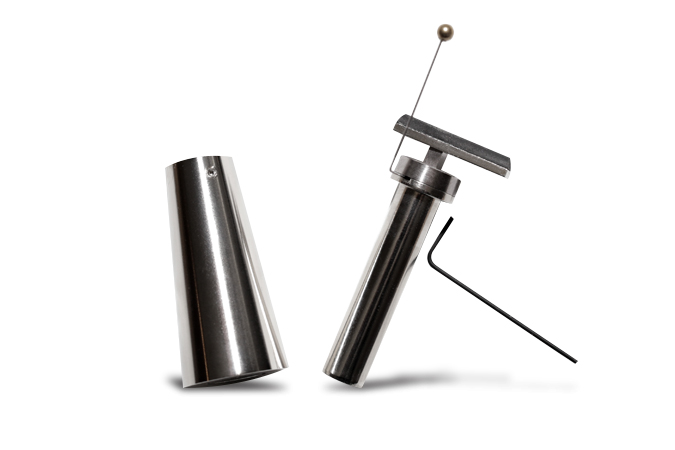 Now you’ll probably need to futz around a little to find the right place to mount the Little Fwend on the plinth. Near the tonearm pivot gives the tonearm the most leverage with which to trip the Fwend’s release wire, I found. It took a couple of tries to find the perfect spot, but it wasn’t that hard -- just remember not to drink too many espressos before doing this, and to move carefully and deliberately at all times.

I found that the JMW 10 unipivot tonearm of my VPI Prime Signature turntable was a bit more critical of setup than was the gimbaled arm of my Pro-Ject RPM 10 Carbon ’table. However, a quick back-and-forth with Sundsåsen provided more detailed instructions for just such an eventuality. This sorted me right out with the VPI. Of course, a more careful reading of the included instructions would have accomplished the same task, but I guess that’s not really my way.

In use, the Little Fwend was charming. At the end of a record side, the tonearm trips the wire and the platform gently rises, lifting the arm just enough to remove it from the groove. Whether I was playing wafer-thin 1970s oil-crisis pressings, or thick Mobile Fidelity Sound Lab slabs stamped from 200gm biscuits, the Little Fwend quietly did its job and consistently removed the needle safely from the groove. 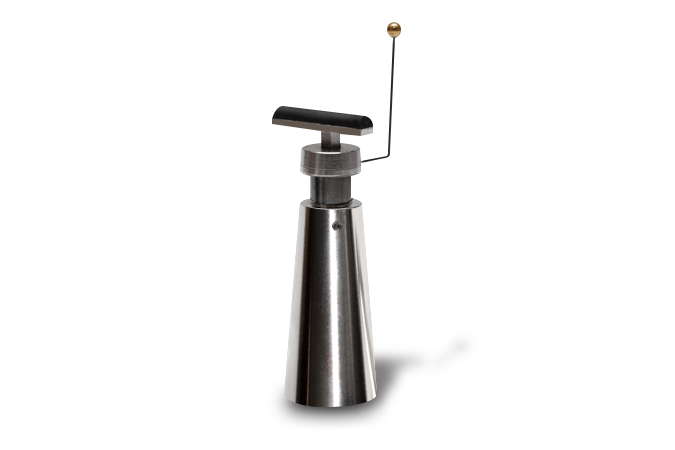 Should you forget to reset the Little Fwend and start playing the next record side, the tonearm will bump into the side of the platform and the stylus will begin to skip. This happened a couple of times shortly after I’d installed the Little Fwend, before I’d gotten into a rhythm with the thing, and while it sounds alarming, it wasn’t that bad. In one instance I purposely let it skip about a dozen times before rescuing the tonearm. I then reset the trigger and played the part of the record that had been skipping. I heard no ticks or pops -- and no new skips. A relief.

The Little Fwend is now firmly mounted on my Pro-Ject ’table, and there I want it to stay. Before its arrival, I wouldn’t have thought it a must-have accessory -- after all, for years, at the end of a side, the stylus would just harmlessly bump off the end of the lead-out groove, to be rescued at my leisure. There was something human, something organic about that sound, and I never much worried about it. I’ve even fallen asleep with a stylus grinding away toward the earth’s core and not felt overly fussed.

But the Little Fwend’s solution to a problem that wasn’t much bugging me now strikes me as an extremely elegant supplement to my already-well-sorted vinyl rig. The Little Fwend is distributed in North America by MoFi Distribution and is available from www.musicdirect.com. For availability outside of North America, check out www.littlefwend.com.

Step up to the plate

Not long ago, I reviewed the VPI Prime Signature turntable, and just this week I’ve received Dr. Feickert Analogue’s Volare turntable. When the VPI landed, I took down my Pro-Ject RPM 10 Carbon ’table and moved it off to the side to make space for the VPI on my Target rack. When I’d finished my listening for that review, I swapped the ’tables so that I could listen to my Pro-Ject again. Now I have nowhere to put the Volare. Of course, I could again shunt the Pro-Ject off to the side, but turntables are delicate precision instruments that operate at the micron level, and I hate moving them -- as I move each component part, I feel like a sapper defusing a bomb.

What I need -- need, I tell you -- is a double-wide equipment rack. Triple-wide, even. Surfing the web, looking at audiophile options, left me depressed. The stuff is either exceptionally ugly or horrifyingly expensive -- or both. It’s like shopping for flowers: “Oh, it’s for a wedding?” The price triples.

As I sat in our kitchen, browsing these overpriced (to me, anyway) racks, I began to sense that I was overlooking something. Then I glanced down at the kitchen table.

A year ago, we had a new bar-height kitchen table custom-made for us by a local artisan, Jason Trauzzi, and it’s stunning in its simplicity and elegance. It’s made from 2”-diameter, box-section, mild steel tubing, and, per my request, Jason applied a roughed-up brushed finish using an edge grinder and a flap disc, then added a satin lacquer to stop it from rusting. The top is a slab of 2”-thick walnut with an oiled finish. Instead of flat-bottomed legs, we opted for four industrial-grade casters so we could wheel the table into the living room to use it as a serving platform. 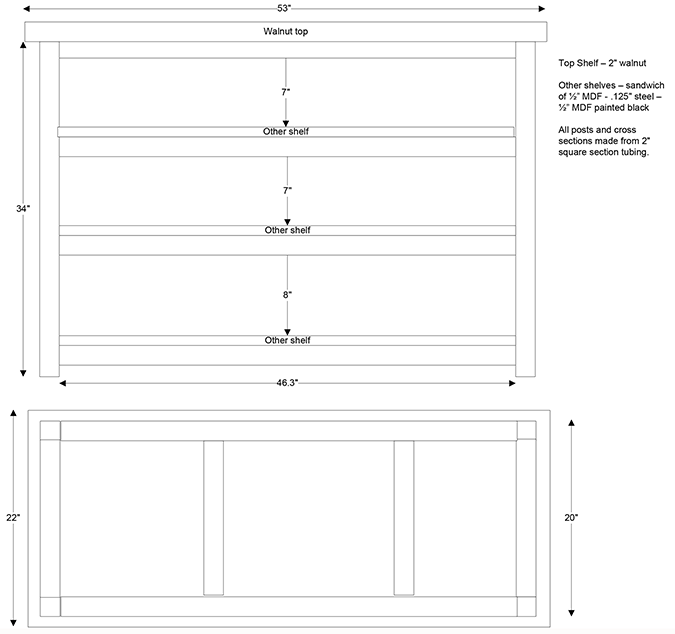 Marcia and I thoroughly enjoyed working with Jason. He was open to our ideas, and the execution more than lived up to our expectations.

I shot off a text to Jason asking if he’d be comfortable dealing with a neurotic audiophile who’s tightly wound around the vibration-reduction axle. Ever the smooth professional, he responded in the affirmative. I began drawing up plans in Microsoft Visio.

Of course, the primary purpose of this rack will be to provide a stable, isolated, dead-as-a-doornail support for turntables. I’m fortunate that my listening room is on the bottom floor of my house, on concrete slab, and that I’m far away from roads and subways. Still, I want this sucker to be heavy and inert.

My final design specifies a 55” by 22” top shelf of 2”-thick walnut, with four lower shelves of 1”-thick walnut. The chassis will be made from the same 2” square-section steel tubing as our kitchen table. Jason isn’t going to anchor the shelves to the rack, for a couple of reasons. First, I plan on filling the upright posts with sand to damp them a bit. The top of each horizontal beam running under a shelf will be mass-loaded with a sheet of vinyl damping material. Further, I’ll reinforce the underside of each shelf with an equal-sized sheet of 0.125”-thick mild steel. Locked in the throes of a now-or-never frenzy of constrained-layer damping, I plan to use more of that mass-loading vinyl between the steel sheet and the walnut.

To Jason’s credit, not once has he responded to my requirements with incredulity. Rather, he’s asked about my reasons for the multiple layers and has offered valuable insights of his own.

More as it develops.