Buying Guide: Your Dream Superspeakers at a Bargain Price

All else being equal, newer is generally better—a conclusion I recently came to (and not for the first time) after another round of car shopping. I’d rather have a newer-model car than the outgoing model, if only for the former’s updated infotainment systems: these days, at least for a family such as mine, with two teenagers, Apple’s CarPlay is a necessity. And newer vehicles offer other, more basic advantages: greater fuel efficiency, improved safety features, and better build quality all around.

But sometimes a used car makes more sense. A low-mileage car from a manufacturer with a good Certified Preowned Warranty program can save you more than $10,000 over the new-car price, and you still might get a fully up-to-date car with lots of warranty left. You might also simply prefer an older version of your model—or maybe there’s no newer variant to consider because that model has been discontinued altogether. For a variety of reasons (excluding an x factor such as the Great Microchip Shortage of 2021), value alone can swing your choice in the direction of used, despite the inherent advantages of new.

The same can often be said about high-end audio—and often not. Some of the practical considerations you might take into account when buying a car aren’t factors in buying a pair of used loudspeakers: 1) There are no safety features to speak of. 2) Miles clock up a lot faster on a car’s odometer than listening hours do on a speaker. 3) Maintenance issues are mostly nonexistent—speakers don’t require oil changes or new tires and brakes. 4) I haven’t seen a ton of gravel-chipped finishes on the speakers I’ve owned—a well-kept pair of speakers can age really well.

That’s not to say that buying used speakers doesn’t present problems. Perhaps the previous owner abused them with excessive sound-pressure levels; maybe the company that made the speakers has gone out of business and can no longer provide replacement parts such as drivers or grilles, should you need them; shipping a pair of big speakers a long distance can be expensive, and a huge logistics hassle; etc. But there’s no denying it: You might be able to afford the speaker of your dreams only if you buy it used.

Here are a few speaker models I’d seriously consider buying used, were I in the market (all prices USD). Every caveat mentioned above would still apply, and it pays to be super-picky about condition: only lightly used, mint-condition examples should be considered. 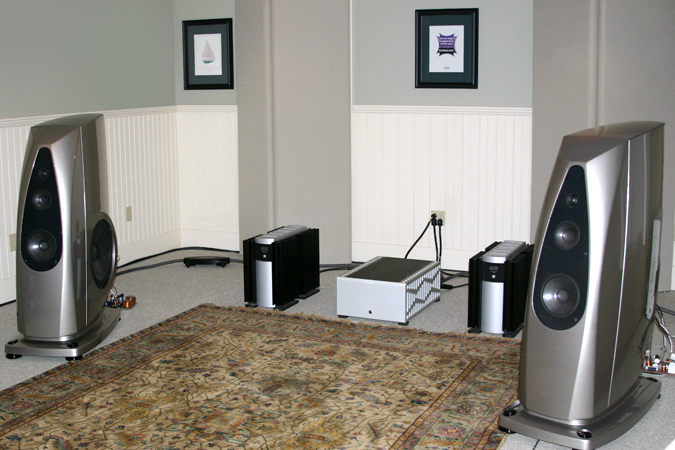 The original Altair is a four-way design that was one of the first Rockport Technologies models to feature founder-designer Andy Payor’s then-new carbon-fiber-sandwich cones. (This material has been updated in current models, which also feature Rockport motor systems.) The four-driver Altair instead has Audiotechnology motors, and its driver complement comprises a 1″ soft-dome tweeter, a 5.25″ midrange, an 8″ midrange-woofer, and a huge 15″ side-firing woofer, all mounted in a super-inert fiberglass-layered composite cabinet. The speaker has a smoothly shaped front baffle and a huge, rear-firing port of aluminum—it’s quite the looker. Although the Altair has a superspeaker fighting weight of 515 pounds, its dimensions of 52″H x 20″W x 35″D mean that it’s narrow and short enough to fit into most rooms of modest size (assuming its considerable depth is not a problem). The Altair goes very deep in the bass frequencies, and throws a pinpoint-accurate soundstage with a tonal balance that seduces on first hearing. A few years later, with the Altair II, Rockport replaced the soft-dome tweeter with a beryllium dome—expect to pay a bit more for that model. 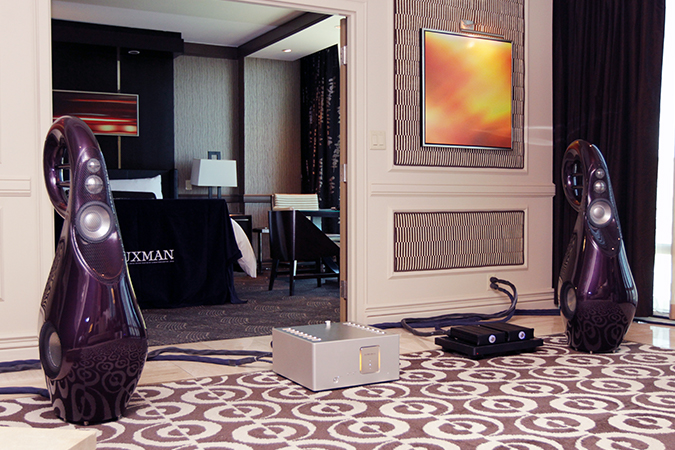 Vivid Audio’s original Giya G3 is a four-way design of five drivers housed in a cabinet made of glass-reinforced, balsawood-core sandwich, and it’s sure to provoke conversation as soon as anyone enters the room. With its pair of reaction-canceling woofers, each G3 can pound out amazingly propulsive bass, especially when you consider its relatively small enclosure: 46″H x 13.5″W x 23″D. The Giya G3’s entire cabinet is designed to reduce edge diffraction, and the force-canceling woofer arrangement prevents the transmission of vibrations to the enclosure. The tapered-tube driver loading developed by Vivid’s Laurence Dickie is designed to absorb the potentially harmful effects of the drivers’ backwaves—the soundwaves they radiated behind them. You can feed these babies some wattage—they can handle impressive amounts of power—and they can rock out Led Zep as can few other speakers. The current model, the Giya G3 Series 2, looks almost identical to the original. 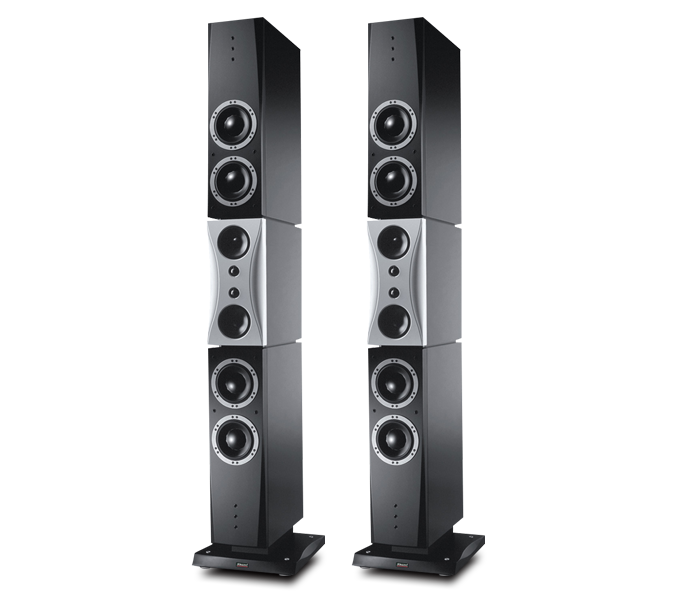 The Evidence Temptation came hot on the heels of Dynaudio’s flagship speaker model, the Evidence Master ($85,000/pair), and in photos looks almost identical. The 249-pound Temptation has two 1.1″ Esotar tweeters, two 5.9″ midranges, and four 6.7″ woofers. It was available in some nice real-wood veneers, and at 15.4″W x 76.1″H x 19.3″D is slim enough to fit into many rooms—but if your ceiling is on the low side, that height needs to be carefully considered. The rear-ported Evidence Temptation can play plenty loud and has impressive power handling. Its soft-dome tweeters never offend in their reproduction of the high frequencies, and its specified sensitivity of 90dB means that it won’t need a massively powerful amplifier to get cooking. For those of you into home theater or multichannel audio, Dynaudio also made the Evidence Center, a dedicated center-channel speaker, that mates perfectly with the Evidence Temptations. Maybe you can find a package deal! 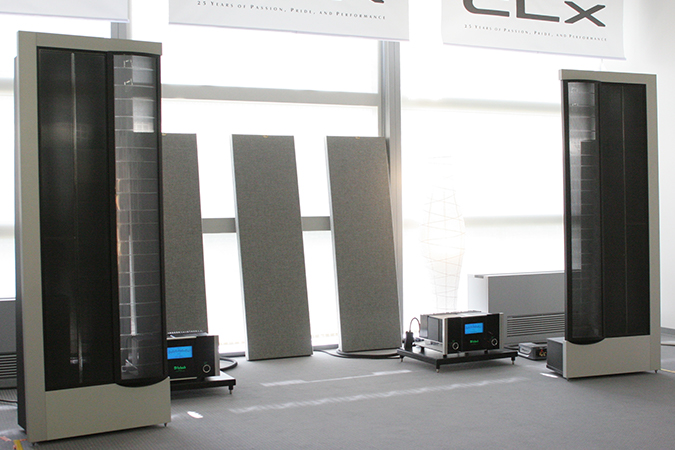 Possessing two electrostatic panels, the CLX is not a hybrid panel-and-cone design but a pure electrostat. Although the lack of a dynamic woofer limits its specified bass extension to 56Hz, everywhere else in the audioband the CLX is magic. Its 110-pound weight makes it easy to move around, but at 70.32″H x 25.75″W x 14.69″D it needs room to breathe. I know many aficionados of electrostats who reject the thought of a hybrid design—if that describes you, then a pair of used CLXes might be right up your alley. I’ve heard the CLXes on multiple occasions, and not only do they throw a huge soundstage, they sound quicker and more immediate, more agile and athletic, than most any other speaker I know of. 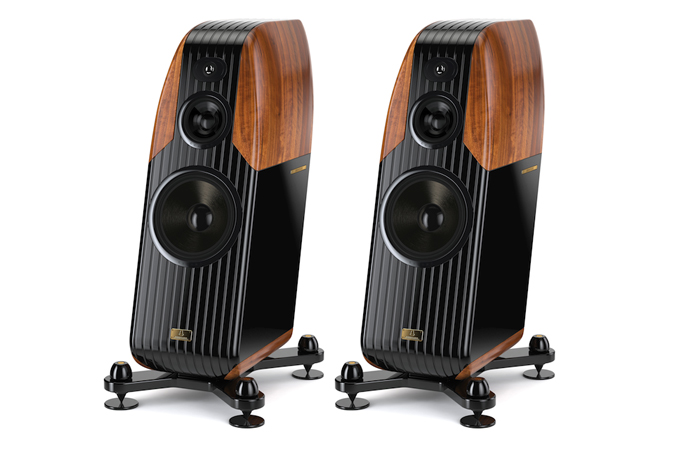 Kharma’s Exquisite Reference comes last in this list because it’s perhaps the least-straightforward to buy used. Audiophiles around the world have loved this classic model for years, and for many it’s still the dream loudspeaker. Through the years its cabinet has largely remained the same; according to Kharma, it’s “built up using vertically layered panels with carefully computed [irregularly] shaped cut-outs, which minimizes [airborne] resonance.” What has changed over the years is the driver complement. Early on, as far as I’ve been able to find out, Kharma used Eton woofers, Accuton midranges, and Focal tweeters. The current version of the Exquisite Reference uses Kharma’s own Omega-7 midrange and an Accuton diamond tweeter. Over the years, other driver options and updates have been offered, so be sure you know the precise vintage of the used units you’re considering, and carefully verify their physical and operational conditions. The Exquisite Reference is a work of art; partnered with the right electronics, it can sound majestic.

Of course, to avoid the pitfalls of buying used, you still might want to buy a pair of new speakers—the last thing any audiophile needs is an expensive pair of speakers whose expensive drivers need to be replaced but can’t be found. But each of these speakers has its unique charms; if you weren’t in a position to buy a pair of one of these models when it was new, maybe it’s time to take another look at your dream loudspeaker, now that it can be had at a seriously discounted price.