In July 2017, I published the first of my six articles in the series “Jeff’s Getting a New Stereo System.” Now, 35 months later, I’m finally done.

When I recently reread that first article, this popped out at me: “I’ll be searching for a system that will cost considerably less than what I had [$400,000], but that still fits the ethos of SoundStage! Ultra: Sound to the Xtreme. The emphasis of my writing from now on will be on the best sound quality, not the most expensive gear.” I’ve not veered from this path -- no $200,000/pair speakers have been in and out of my system, nor have I had any $100,000/pair monoblocks driving the speakers I have had.

That’s not to say I haven’t reviewed some fantastic gear made by some top-shelf names: Gryphon Audio Designs, Rockport Technologies, Shunyata Research, Sonus Faber, TAD Labs, and on and on. But key here is that nothing I’ve reviewed has been its maker’s most expensive model. And therein is a secret I’ll share with you, something I’ve learned from having been in this industry for so many years: Not one of the companies I’ve just named wants to make anything less than absurdly good gear. Each has a reputation to protect, and though they make products that cost less than their flagships, they know their names and logos are displayed just as prominently on the lower-priced models as they are on those flagships. Over the years, many audio designers have told me that it’s a bigger challenge to get from a product the performance they demand while meeting an aggressively low retail price. When cost -- that is, the final retail price -- is no object, it’s easy to keep throwing materials cost and R&D money at a prototype; all you have to do is raise the price to the consumer. It’s much harder to make something that sounds almost as amazing but costs the consumer considerably less.

But when designers and manufacturers succeed in meeting this challenge, we audiophiles are the winners, and in the last three years I’ve learned something very important: Find the sweet spot in a great company’s line, and you can end up with something close to that company’s best at a price an order of magnitude lower than their top model.

There’s no better example of this than the component that has now completed Jeff’s New System: MSB Technology’s Discrete DAC digital-to-analog converter ($9950, base price). 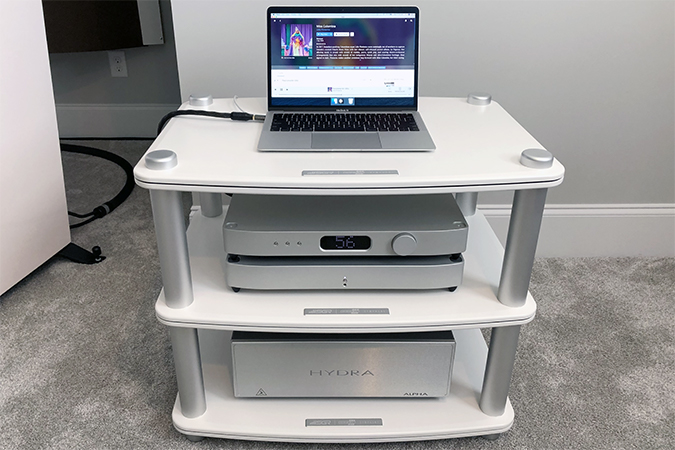 Survey the owners of the world’s most exclusive, most expensive audio systems and you’ll find that more than a few own and adore MSB’s Select DAC II ($84,500, base price). I’ve talked to multiple audiophiles -- people I trust, most of whose budgets are virtually unlimited -- who’ve told me that the Select DAC II is the best digital front end money can buy. Period. I’ve heard that assertion so many times in the past few years that it’s become almost annoying -- not because the folks asserting it are annoying, or because anything about the Select DAC II itself is annoying, but because I knew I’d never own the dang thing.

I’ve listened to MSB’s DACs often at audio shows. Vince Galbo, the company’s national sales manager, is a staple at such shows -- or was, before COVID-19 canceled them all. I’ve marveled at the systems he presents, and have never been less than impressed with their sound. Listening to those systems, and comparing my sonic priorities with his, has taught me that Galbo is an astute listener. He has many years’ experience in the business, and in his setups he sweats all the details. It’s all evident in the high level of their reproduction of recorded music.

It should come as no surprise that it was Galbo who told me about how much effort MSB Technology had put into their Discrete DAC. Since it would bear the MSB nameplate, brothers Jonathan (CEO, designer) and Daniel (product designer) Gullman wanted the Discrete to be not only a good DAC, but to provide a generous portion of all the quality MSB can offer in the conversion of digital signals to analog. The Discrete may be MSB’s entry-level DAC -- between it and the Select DAC II come the Premier ($19,500) and the Reference ($39,500) -- but it’s a far cry from the entry-level DACs made by most audio companies. 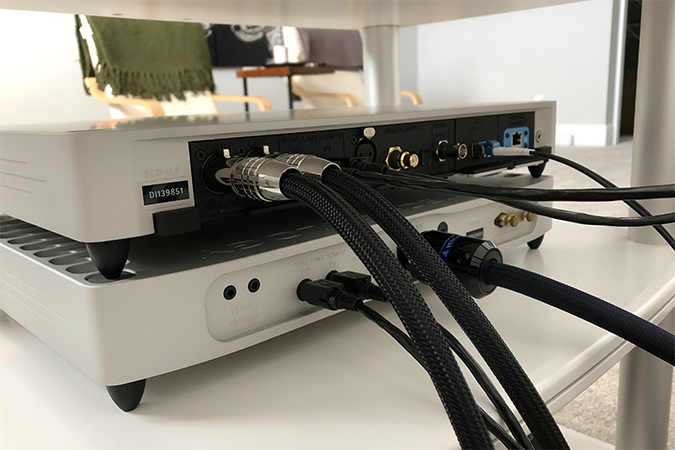 The reasons the Discrete is so good have everything to do with the core technologies that are at the heart of every MSB DAC -- things that replace the off-the-shelf DAC chips found in so many other companies’ DACs. Like MSB’s costlier DACs, the Discrete is outfitted with their fully balanced, discrete ladder DAC technology, courtesy two of the company’s Prime DAC modules. I asked Galbo to tell me about the main advantages of a discrete ladder DAC:

Tubes, transistors, op-amps (semiconductors), capacitors, and inductors all have transfer functions that involve time. Resistors may be the only components that, except for limiting current via resistance, otherwise behave like a straight piece of wire. Using the current-limiting function, resistors can be assembled in an interconnected network to perform many functions in general electrical design. One of these functions can be a ladder DAC where the raw data is injected directly into a specific rung of a ladder at the appropriate time. The analog signal appears at the output of this network. It is simple and extremely fast. The ladders (and the whole motherboard) are good for 6MHz PCM and 50MHz for DSD. We doubt we will ever use those speeds, but that speed is one of the results of good ladder design. The already extremely low noise floor of each ladder is improved further by paralleling ladders doing the exact same function at the exact same time. This also improves output impedance. MSB is now 20 years into evolving and developing how ladders work using proprietary technologies to achieve the specs we now have.

Another consideration for me was that the Discrete is designed so that a system’s optimal performance is achieved when the DAC’s low-impedance circuitry drives your amplification directly -- which is perfect for my all-digital system. MSB believes that such a system has no need for a preamplifier, which would only add noise. Galbo explained:

This requires a discussion about preamps. Preamp line-level was specified in the early days (probably by RCA). The job of a preamp, then, is to create gain in several increasing stages for the sole purpose of . . . turning it down again! Creating clarity with gain with transistors (or tubes) is an art still being chased to this day. MSB ladder DACs, being the direct data-to-analog converters, are designed to put out full volume directly at their output. So no gain is needed, and the signal only needs to be attenuated. This is infinitely simpler. The Discrete, Premier, Reference, and Select products are the first MSB DACs to also not require output buffers to drive the combined load of the cables and amplifier input impedance. The attenuation is done with a new form of attenuator that does not have any semiconductors, and does not change output impedance as volume changes. It is also designed to have constant impedance over the full bandwidth of the signal.

MSB also has their own highly accurate clocking technology, with their digital clock placed as close as possible to the DAC modules, to minimize digital jitter. I asked Galbo why this physical proximity is so important.

It is one thing to have a femtosecond clock; it is another to maintain that accuracy throughout the system. With clock specs in the femtosecond range, the properties of reactance, inductance, and resistance can have a profound effect on the accuracy. One way to manage these parameters is to shorten the distance to the core engine, which is the ladder group.

Finally, the Discrete is modular in design -- it can be ordered in many custom configurations, to suit any system. This includes not only the input and output modules; the power supplies, too, can be upgraded. My sample of the MSB Discrete was configured with two optional input modules:

The Pro USB module ($1980) comes in two pieces: a small (6”L x 1.95”W x 0.88”D), outboard aluminum brick that connects via USB link to your computer on one end, and on the DAC end to the Pro ISL input module via a single fiber-optic cable. This provides complete electrical isolation of the DAC from the computer. 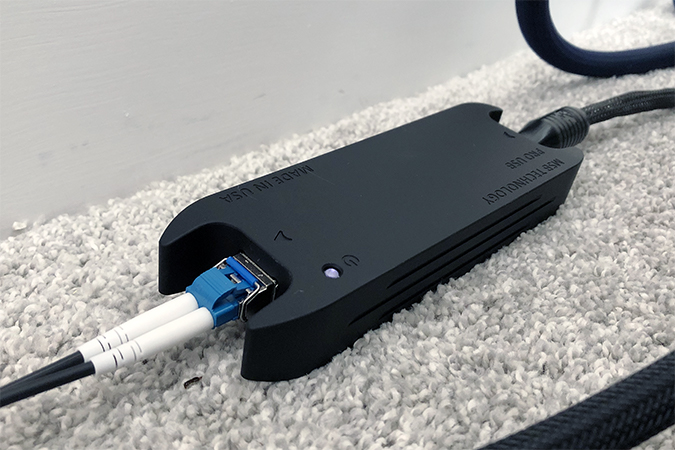 The second optional module I got was the Network Renderer V2 ($1995), which permits network streaming via the module’s Ethernet input. This module provides full MQA decoding and can serve as a Roon endpoint. The Network Renderer V2 accepts signals of resolutions up to 32-bit/768kHz and DSDx4; the Pro USB accepts up to 24/768 and DSDx8.

By far the most expensive option I added, based on Vince Galbo’s advice, was the Premier Powerbase ($7500 at time of original order, $8950 if bought separately). This upgrade costs almost as much as the Discrete itself -- but every audiophile should know the importance of a good power supply, and this one comprises four completely isolated supplies, one each for the digital inputs, digital processing, audio clock, and DAC modules.

I immediately heard what all the fuss was about. I haven’t yet put much playing time on my Discrete DAC -- I’m sure it’s not fully broken in -- but the sound is stunning. As I write this I’m listening to Lido Pimienta’s Miss Colombia (16/44.1 FLAC, Anti-/Qobuz), and I’m amazed at the walk-into soundfield it’s creating in my room -- a very deep, wide soundstage, the tangibility of every note, a tonal purity that seems to combine the best attributes of the best digital and the best analog. I’ll be listening late tonight.

Jeff’s Got a New Stereo System

My new system is complete. Here’s the final rundown: 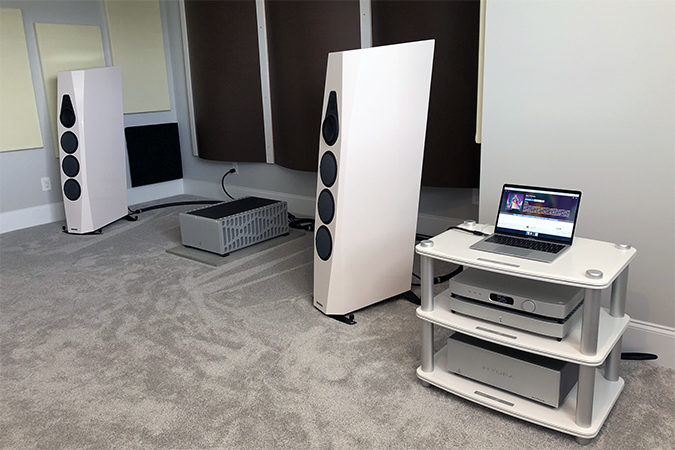 With the final piece of this puzzle now inserted, I can tie a bow on Jeff’s New System. This fun adventure has reinforced for me some important lessons that I’ll carry forward as a reviewer. The most important of those lessons? To experience what makes a given audio company’s products special, you don’t have to buy their most expensive model. It’s those models that I most enjoy getting in for review -- and you’ll see the best of them in future virtual pages of SoundStage! Ultra.