Cat Stevens: "Tea for the Tillerman" 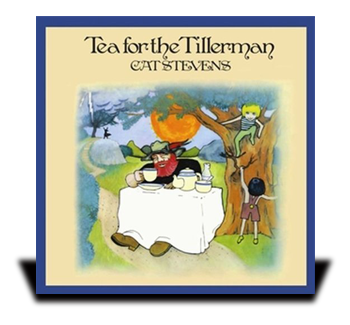 Tea for the Tillerman was Cat Stevens’s fourth album, and his second with producer Paul Samwell-Smith. Stevens had enjoyed some success in England in 1966 with his first LP, Matthew and Son (Decca), but had been dissatisfied with the production of his second, New Masters, the following year. He was leaning toward a simpler, folk-rock sound, and his producer had made an overly elaborate record that didn’t even chart. After a lengthy recuperation from tuberculosis in 1969, Stevens changed record labels (Island in Europe, A&M in the US), released Mona Bone Jakon in July 1970, and then, just four months later, became an international star with the release of Tea for the Tillerman.

Mona Bone Jakon and its follow-up were both truer to Stevens’s new vision than New Masters. Simple but elegant in execution, the spare arrangements highlighted his expressive voice and strong songwriting. But if Mona Bone Jakon was a statement of purpose, Tea for the Tillerman was a far more confident effort; the album’s first single, "Wild World," helped make Cat Stevens a star in the US and around the world. The rest of the album proved as strong as the single. "Where Do the Children Play?" sounded so many concerns of the late 1960s and early ’70s, especially the impending environmental doom and lost innocence that grew out of urban and industrial growth. "Father and Son," one of Stevens’s most beautiful melodies, looks at the estrangement between generations, the singer presenting both voices convincingly.

This stereo SACD/CD reissue from Analogue Productions brings you as close to this music as you’re likely to get. My point of comparison is a German Island pressing from the mid-’70s, and the SACD layer here is far more detailed and open. George Marino at Sterling Sound used the original analog master tape as the source for this remastering, and it has a first-generation immediacy. Stevens’s voice is centered, slightly out front in the soundstage, and stunningly present. Small details are easier to hear without ever being overemphasized or compressed. The electric piano in "Where Do the Children Play?" is much clearer than on the LP, and when Stevens reaches for the low note in the chorus, you get a much greater sense of it resonating in his chest.

The disc’s CD layer is also very good, with an impressive amount of detail and clarity, but the guitars at SACD resolution have more body, and you can better hear inner details, such as guitar picks striking strings and fingers sliding on fingerboards. The string arrangement of "Sad Lisa" has more life, with Stevens’s voice set off sharply, and with more space around it at the higher resolution. The CD layer is a job very well done, but the music is more lifelike on SACD. Marino’s mastering is exemplary throughout.