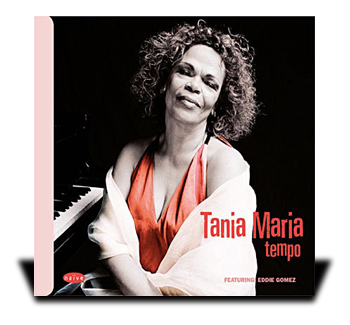 You might have heard of Tania Maria as a Brazilian bombshell whose fusion performances have been spicing up jazz clubs and recordings for 30-plus years. On this album she has just one partner, double bassist Eddie Gomez, known to many for his work with Bill Evans. Tania Maria is earthier than ever on Tempo, on which her singing, piano playing, and composing skills can be easily heard.

At the top of her game in her 60s, Tania Maria seems like a musical force that cannot be stopped -- but who’d want to? Music seems to possess this artist as she plays and sings music that is reminiscent of many styles, but is always Brazilian to the core. You’ve heard of musicians who have a style in their bones; Tania Maria is one of them. Her voice has deepened slightly over the years, which makes it only more luscious, sexy, and beguiling; some of her growls have become purrs -- of a panther, not a pussycat.

Tania Maria’s playing style is percussive; even her quieter, more sensual moments are unlike those of other artists. Listen to Antonio Carlos Jobim’s “A Chuva Caiu,” which is romantic in a voluptuous way -- a consuming heat turned down to a simmer. I like this cut a lot, as well as two other quiet songs, “Estate” and “Tempo.” But it’s perhaps in the upbeat numbers that Tania Maria emerges as the only artist who could sing them, and Gomez as the only player who could hold his own with her. “Yeah Man,” one of her four originals here, resonates with high-energy blues and boogie -- a Brazilian view of American jazz that Tania Maria incorporates into the deep-rooted musical heritage of her native country. “Dear Dee Vee” is Tania Maria with all the stops pulled out; she does some of her inimitable Brazilian scatting, and inserts percussive comments during breaks in the music. Here she sings no words, her voice becoming a third instrument going note for note with her right hand, to create a unique sound that is neither voice nor piano but some imaginary instrument yet to be named. In his virtuoso solo spot, Gomez follows suit.

The engineers are to be complimented for having captured the musicians in exemplary sound. Both emerge with clarity and presence from the center of a warm, lush soundfield. You might be tempted to credit some of the incredible sounds that Tania Maria and Eddie Gomez create to clever audio manipulation, but I’ve heard her in concert and can assure you that they’re doing it all themselves. The engineers have just captured the performers accurately, with great care and little fuss. I think there’s a good chance this album might be nominated for a Grammy next year. Be sure to hear it.