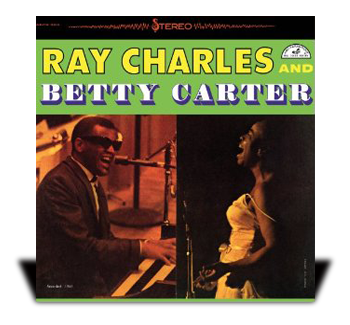 Miles Davis is credited with having brought Betty Carter to the attention of Ray Charles, who used her talents on tour in the late 1950s and recorded this duet album with her in 1961. Charles had switched from Atlantic Records to ABC Paramount, where he could have more control over his master tapes and thus make more residual money, not to mention have more control over his recording sessions.

When they made this record, Charles and Carter were both in their early 30s (Carter was slightly Ray’s senior) and in splendid voice. The pairing seems unusual on paper, Charles being known at that time as mostly an R&B singer, Carter as an upcoming jazz experimentalist. Against some odds and fulfilling many expectations, the combo worked.

The duo’s take on “Baby, It’s Cold Outside” is the track most people know from this album. Deliciously suggestive while maintaining a façade of innocence, it topped the R&B charts. The song, by Frank Loesser, who wrote Guys and Dolls and The Most Happy Fella, was originally recorded in 1944 by Loesser and his wife, Lynn. Loesser sold it in 1949 to MGM for the Esther Williams film Neptune’s Daughter, in which it was sung by two teams: Williams and Ricardo Montalbán, and Betty Garrett and Red Skelton. Charles starts off sounding a little bored and nonchalant, but Carter quickly warms him up; a few of his later lines are full of heated sexual innuendo and urgency. Charles and Carter established the tune as a holiday number that has since been recorded by dozens of artists and is now heard every December.

The rest of the album contains several numbers frequently found on duet albums: “You and I,” “People Will Say We’re in Love” (surprisingly successful), “Side by Side,” “Together,” and “Just You, Just Me.” Despite some wonderful moments, the album is not a complete success, largely due to the often overbearing and sugary arrangements by Marty Paich, who adds some not particularly welcome passages for the Jack Halloran Singers. Things are at their best when they’re up-tempo and everyone lightly swings.

The sound is pretty darned wonderful. Once again, Analogue Productions has turned up a three-channel master for a multichannel SACD release. This allows the singers’ voices to be heard from the center channel with greater clarity than in earlier two-channel versions. The two-channel SACD and CD mixes are excellent, but the three-channel is special. In all three mixes, the faster numbers benefit from having Ray’s piano and band in the left channel and Paich’s larger orchestral brass in the right. “Baby, It’s Cold Outside” is the only track in which Charles and Carter leave the center to individually occupy the left and right channels. Overall, the SACD tracks glow with analog warmth, sounding just right all the time.

Though it’s not listed anywhere in the booklet or on the disc itself, there’s a significant 13th bonus track: Charles’s popular version of “Hard Hearted Hannah,” also in three-channel. And if you want to hear a “Baby, It’s Cold Outside” that’s truly naughty instead of merely coy, listen to this original by Frank and Lynn Loesser.