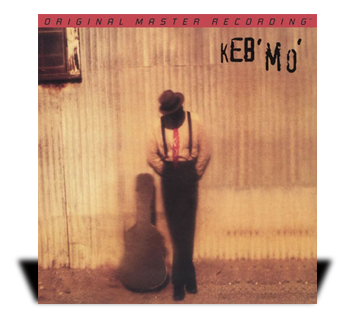 Although Kevin Moore, better known as Keb’ Mo’, recorded his first album in 1980, he didn’t land on a major label until 1994, when Okeh Records, a subsidiary of Epic, released Keb’ Mo’. Mo’ had played and recorded with the late Papa John Creach (1917-1994) and had worked in other facets of the music business, but his stint with Creach led to jamming with other blues musicians and solidified his skills as a blues player. Keb’ Mo’ was a confident outing, with a contemporary sound that for the most part remained true to its roots.

Mobile Fidelity Sound Lab’s new LP of Keb’ Mo’ is a considerable improvement over the CD, which is loud and compressed. Mo’’s version of Robert Johnson’s “Come On in My Kitchen” has a funky, modern bass line that the original CD pushes forward, along with the other elements of the recording. The mastering on MoFi’s LP is more nuanced -- Mo’’s resonator slide guitar sounds warmer, less edgy and bright. James “Hutch” Hutchinson’s bass thumps as hard on the MoFi LP, but doesn’t feel overdone as it does on the CD. Mo’’s guitar playing flows naturally on the LP, and his harmonica playing has better tone.

“Tell Everybody I Know” opens with Mo’’s resonator guitar -- again, it sounds less emphatic on the MoFi LP, which lets you hear the instrument’s true tone. When Mo’ slaps his hand against the guitar near the beginning of the track, it sounds so strong on the CD that it seems contrived. On the LP, it has a pleasing percussive ring that helps set the stage for the song. Tommy Eyre’s keyboards provide a more subtle backdrop, and Laval Belle’s drums are placed more precisely behind Mo’.

In “Love Blues” and “Victims of Comfort,” Mo’ accompanies himself on guitar -- the MoFi gives his voice and guitar more room. It’s easier to hear the strings’ harmonic overtones, and Mo’’s strumming in “Victims of Comfort” is less aggressive and pushy. His fingerpicking in “Love Blues” is much more layered on the LP, with a better sense of dynamics. The guitars sound deeper and more expansive, yet more in support of Keb’ Mo’’s voice, rather than fighting him as they seem to do on the CD. “Anybody Seen My Girl,” another acoustic tune, is much more moving and involving as a result of the space the mastering gives the voice and guitar.

Krieg Wunderlich’s remastering of Keb’ Mo’ brings so much more depth to the music than the original CD that I found myself reassessing much of it. It’s a very modern blues CD with a forward and aggressive sound, even in spots where a lighter touch was called for. Wunderlich gives it that touch, and an album about which I had conflicting feelings turns out to have been much better than I’d thought. A track like “Dirty Low Down and Bad” now breathes, with the instruments behind and more in support of Keb’ Mo’’s voice. It’s now possible to hear how fine his singing really is.

Add to the intelligent mastering Mobile Fidelity’s usual high quality of packaging and RTI’s dead-quiet pressing, and you have a definitive version of an album that solidly established Keb’ Mo’’s blues career.