Catherine Russell: "Bring It Back" 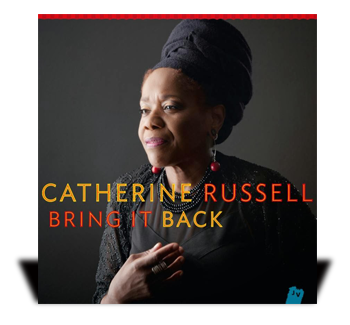 The title track of Catherine Russell’s Bring It Back opens the album with a swinging blues punch in a traditional arrangement that still manages to sound fresh and up to date. Russell’s father was a jazz musician who worked with Louis Armstrong, among others, and Bring It Back reaches back to early jazz for its style and inspiration. Russell and her band ensure that the result isn’t a museum piece, but an affirmation of jazz in its many forms.

My generation knows of “The Darktown Strutters’ Ball” because, in 1969, The Band quoted from its lyrics on the back cover of their second album, The Band. Published in 1917, Shelton Brooks’s tune has been widely recorded, but Russell and her band polish it up with a warm blues arrangement enlivened by Matt Munisteri’s cool, unfussy guitar solo. Russell sounds like she’s having a ball singing this old chestnut, and her enthusiasm makes the song new again. Her gift to us, and to all these old tunes, is to let us feel the joy people hearing them for the first time must have felt.

Al Hibbler’s version of “After the Light Go Down Low” was a hit in 1956, and Glenn Patscha’s Hammond B-3 gives Russell’s turn at it a jukebox feel. The track is presented simply -- just organ, guitar, bass, and drums -- and Russell grabs hold of the tune with unforced conviction. Her control of vocal dynamics lets her create excitement and drama without pushing too hard to make her point. The gospel vibe of “I’m Sticking With You Baby” might have been easily overdone, but Russell sings it with a spirit and emotion that are clearly heartfelt.

The affection of Russell’s band for older jazz is clear -- they play it with energy and respect. Arranger and tenor saxophonist Andy Farber, whose own discs are solid big-band outings, re-creates a 1930s jazz feel for “I’m Shooting High,” and his chart for Duke Ellington’s “I Let a Song Go Out of My Heart” pays respect to swing-era Ellington without merely copying him. HBO’s Prohibition-era series Boardwalk Empire has used Russell’s music in its soundtrack, and she and her band have a broad command of jazz and blues that lets them play Ida Cox’s “You Got to Swing and Sway,” from 1939, with the same ease as Johnny Otis’s 1952 hit for Esther Phillips, “Aged and Mellow.”

Producer and mixer Katherine Miller engineered Bring It Back at MSR Studios, with Dan Fyle assisting. The sound has an atmosphere of analog warmth that’s appropriate to the music, and the instrumental details are nicely presented.

Russell has toured with David Bowie and other contemporary musicians -- I don’t read “Bring It Back” as a suggestion that we jump into the past with both feet. She wants us to acknowledge our musical past and enjoy its treasures. Many singers have done versions of “I Cover the Waterfront,” including Billie Holiday. Russell’s accomplishment is to let you enjoy her interpretation on its own terms. After hearing it, you’ll want to explore the song’s history and hear what other singers have done for it -- and you’ll add Russell to the list of those who’ve done it justice.