Details
Written by Rad Bennett
Category: Recording of the Month
Created: 01 May 2014 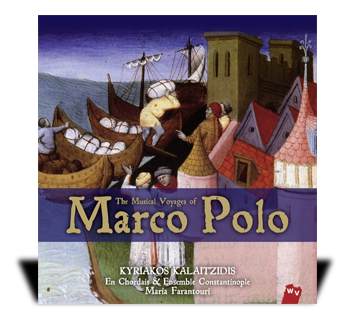 In wanting to find recordings of new and different sounds that would show off my audio system, my audiophile journey has led me to explore many unique recordings I might otherwise never have come across. This winter, that journey led me again to a favorite label, World Village Music, and the explorations of another adventurer, Marco Polo.

Marco Polo (1254-1324) is credited with being the first Westerner to have traveled to China and recorded his experiences in a journal, which was widely read. He left his native Venice at the age of 17 with his merchant father and uncle, traveled through the east to China, and returned 24 years later with exotic riches and treasures. Polo himself became a wealthy merchant, but never again traveled to the East.

The idea that Polo must have heard many different types of music during his travels was the basis of the very enjoyable and eclectic The Musical Voyages of Marco Polo. The project was conceived by Kyriakos Kalaitzidis, a Greek musicologist, composer, singer, and oud player who has arranged the music and written much of it. He leads the players of En Chordais & Ensemble Constantinople, a group devoted to Byzantine folk and concert music. On several tracks they’re joined by Maria Farantouri, a famous Greek singer and activist; at one time she performed protest songs with Mikis Theodorakis, perhaps best known to Americans as the composer of the score for the film Z (1969).

The musical styles represented on The Musical Adventures of Marco Polo constitute a musical gazetteer from Venice to China. One composition might sound Chinese, followed by another that sounds Byzantine -- then back home to Italy. Style plays a large part in how the mood changes from track to track, but what really make this disc fun for the audiophile are the arrangements. Mixed in with such familiar Western instruments as the recorder, violin, viola da gamba, and piano are such exotics (to our ears) as the oud, pipa, qanun, setar, tombak, and bendir. The CD booklet includes excellent color photos of the players, each holding his or her principal instrument, to make it easier to put together sight and sound. Those sounds are diverse and delightful, ranging from a single oud to the full ensemble of eight. For once, the label “world music” seems accurate.

The instruments are arrayed from left to right on the soundstage, with adequate depth and very transparent sound. I was happy with this musical adventure, and extremely pleased with the opportunities it gave my MartinLogan speakers to shine.