After making five albums for Geffen Records, Neil Young returned to Reprise Records in 1988, and the first product of that reunion was This Note’s for You. Young’s Geffen output -- such recordings as the strange electronica of Trans (1982), and the rockabilly-flavored Everybody’s Rockin’ (1983) -- had thrown label and fans for a loop. This Note’s for You was another unusual turn: a dozen blues and R&B tunes that put Young in front of a horn section. Critics didn’t fall over themselves with praise, but it got a warmer response than the records that had preceded it.

I’ve always thought that This Note’s for You was one of Neil Young’s most successful side trips. He, too, must like it -- now, as part of his Archives Performance Series, he’s released this two-disc live set. Bluenote Café comprises music recorded in 1987-88, on a tour in support of This Note’s for You. The band, Bluenote Café, included a six-piece horn section led by Steve Lawrence on tenor sax; they sound as polished as they did in the studio, but in these concert recordings they punch harder, and Young’s guitar burns brighter. “Ten Men Workin’” sounds cleaner on the original, but there’s more crunch and loose swing in the live version, and Young’s guitar has more snap. 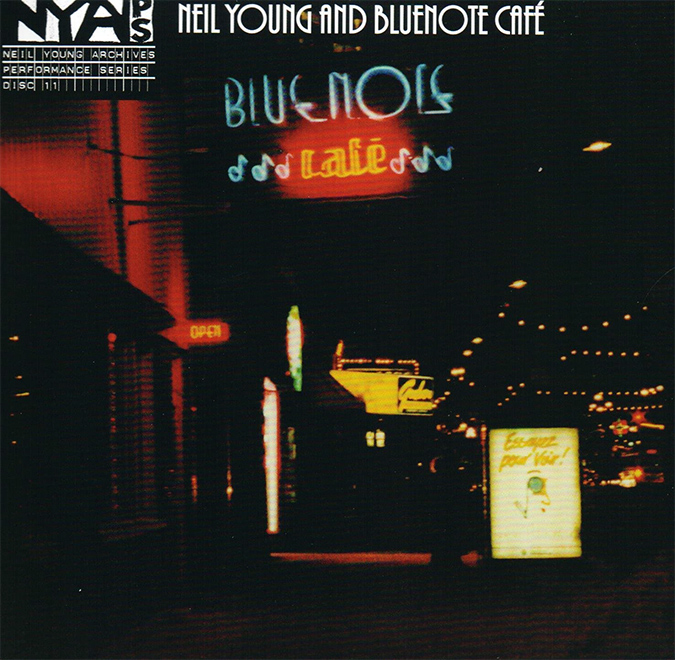 The studio version of “Twilight” has a terrific Memphis soul groove; the live version is grittier, and Young’s voice is more relaxed and soulful. The arrangement is virtually the same, but here it has room to breathe, and in his solo, Young’s guitar cuts deeper. The hard slam of Chad Cromwell’s drums is sharper in the studio, but here the song sounds more dynamic and is more emotionally stirring.

Bluenote Café includes songs not included on This Note’s for You such as “Welcome to the Big Room,” as well as tunes available in different versions on other albums, including “Soul of a Woman” and “Fool for Your Love.” The big surprise is a 19-minute version of “Tonight’s the Night” that is different from the original, but just as haunting. Rick Rosas’s bass lines give the song a funky undercurrent, but Cromwell’s hard-hitting snare drum keeps the song’s rock pedigree intact. The song builds powerfully, the horns playing against Young’s scorching solo.

Young reaches far into his past for Buffalo Springfield’s “On the Way Home,” in which he uses the horns effectively. He’d recorded “Ordinary People” in 1988 for an unreleased album, Chrome Dreams, and in 2007 resurrected it for Chrome Dreams II. The later recording uses the same arrangement and personnel as the live version here. The horns are a terrific addition to a rave-up Neil Young rocker.

The recordings come from 11 dates. Young doesn’t stick strictly to the styles on the original album, but the tracks are well sequenced -- they flow together seamlessly. Ron McMaster and Ian Sefchick mastered Bluenote Café from tapes mixed by Tim Mulligan and Niko Bolas, and the two discs have an engaging live ambiance that captures the power of the horns and the fire of Young’s guitar.

Neil Young’s experiment with this group and sound was a one-off he’s unlikely to repeat, but I’m glad he’s released this energetic, entertaining set. Few musicians take as many risks as Young does -- like Bob Dylan’s, Young’s flops, like his successes, are the results of his desire to push himself into new territory. This Note’s for You was an experiment that worked; Bluenote Café demonstrates it worked even better live.