Mark Knopfler has written music for films since 1983, when he composed the score for Bill Forsyth’s Local Hero. He’s done the music for eight more films since then, including Cal (1984), The Princess Bride (1987), and Wag the Dog (1997). His latest, Altamira, is a collaboration with percussionist Evelyn Glennie, and is his first soundtrack since A Shot at Glory (2009).

The best soundtracks enhance their films while being able to stand alone -- think of Bernard Herrmann or Ennio Morricone. Altamira is a period drama about the discovery, in Spain in 1880, of cave paintings made 20,000 to 35,000 years ago. I haven’t seen the film -- as I write this, Altamira has yet to be released in the US -- so I can give my impressions of only the music itself.

The title track features Knopfler on acoustic guitar and Glennie on marimba, with help from Guy Fletcher on harmonium. Although, in a documentary about the making of the soundtrack, Knopfler says that he and the director, Hugh Hudson, wanted the music not to be specific to time or place, “Altamira” sounds like a Spanish piece from long ago. Glennie’s marimba plays beautifully against Knopfler’s elegantly stated acoustic guitar lines, and Perry Montague-Mason’s string arrangement aids the track’s subtle development.

Each track of Altamira evokes a mood that Knopfler, Glennie, and the other musicians develop with a gentle touch. Michael McGoldrick’s flute highlights the Celtic influence in “Maria,” built around a simple melody from Knopfler and a subtle but effective backdrop from Glennie. Knopfler doesn’t play on “Dream of the Bison,” which features Glennie on percussion, marimba, and vibes, creating a darkly frightening series of effects to which Fletcher’s keyboards add an even more ominous tone.

Although Knopfler and Glennie are in the foreground throughout Altamira, many cues are filled out with arrangements for strings and chorus that give them a larger, more enveloping feeling. In “Glory of the Cave,” voices and strings combine to form a brief, entrancing interlude, Knopfler giving melodic shape to the piece as Fletcher’s keyboards provide atmosphere. In this music, no single musician is pushed forward; each of the ten tracks sets a tone to which all the players contribute. 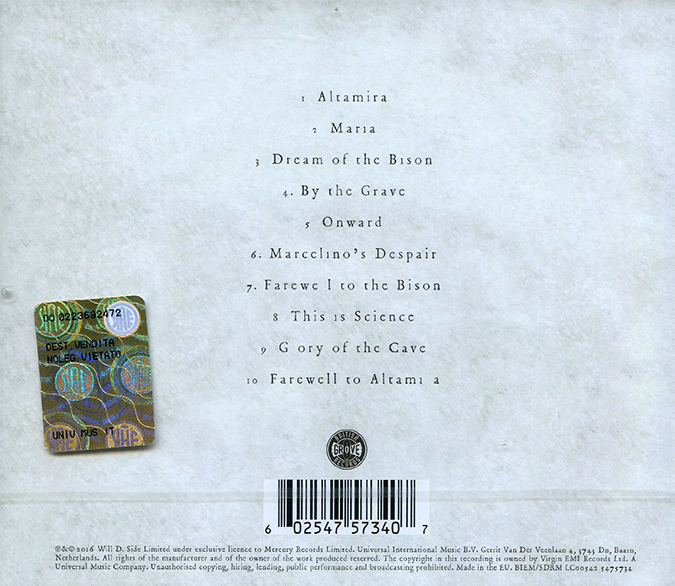 While I hesitate to call the music ambient, it’s easy to just let it flow, linked as it is by recurring themes. Knopfler plays his lines cleanly, unobtrusively inserting intervals and arpeggios. Martin Hollis and Jason Elliot recorded Altamira at Knopfler’s British Grove Studios, where Eric Clapton, among others, have recorded. The soundstage is lushly expansive and deep, and the instruments are presented in astonishing, three-dimensional clarity.

At just under 26 minutes in length, Altamira should probably have been sold as an EP. Knopfler completists will want it; it demonstrates how adaptable his guitar playing and songwriting are, and how adept he is at letting both reinforce a mood. When Altamira is released in the US, it will be interesting to hear how well the music has been integrated with the images onscreen.