The Flying Burrito Brothers: "The Gilded Palace of Sin"

If, in 1969, the stomping bass line of “Christine’s Tune” didn’t clue you in to the fact that the Flying Burrito Brothers’ debut, The Gilded Palace of Sin, was going to be something different, “Sneaky” Pete Kleinow’s overdriven, fuzz-toned pedal-steel guitar solo should have clinched it. Gram Parsons, who co-led the band with Chris Hillman, had already helped introduce country music to rock with the International Submarine Band, and even more with the Byrds’ Sweetheart of the Rodeo, both from 1968. The Gilded Palace of Sin was a clearer statement of his vision.

Parsons stuck around with the Byrds for that one album, then grabbed Hillman, who’d also left the Byrds, to form the Flying Burrito Brothers. Parsons had an idea to fuse soul, rock, R&B, and country into something he called “Cosmic American Music.” In 1969, the idea of a bunch of longhairs playing country seemed pretty strange, and The Gilded Palace of Sin peaked at 164 on the Billboard 200. 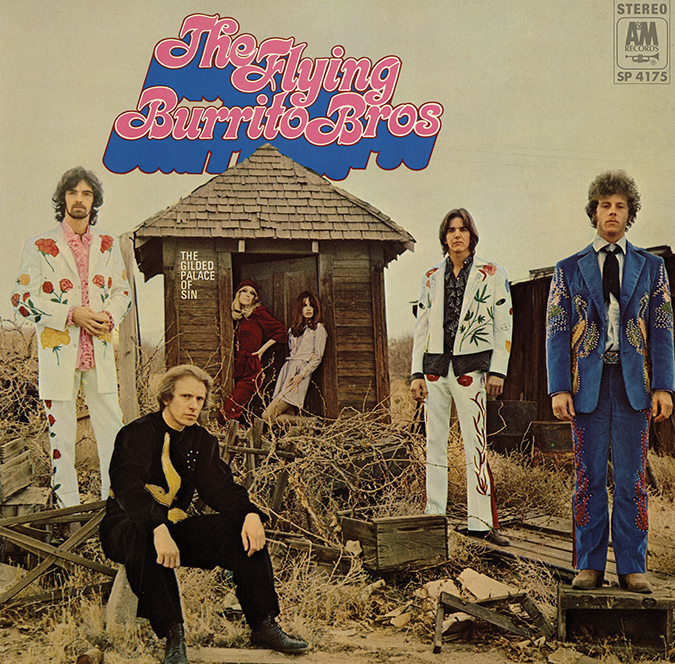 I have a 1997 UK edition of The Gilded Palace of Sin and Burrito Deluxe on a single CD, as well as a 2007 4 Men with Beards vinyl pressing. Those were my points of comparison for Intervention Records’ new reissue on vinyl (it’s also available as a hybrid SACD/CD), which Kevin Gray remastered from a 1/2” safety copy of the original stereo master tapes. I also listened to Farther Along: The Best of the Flying Burrito Brothers, a 1988 CD compilation that includes eight of Gilded’s 11 tracks. The compilation is less compressed than the UK CD, but I’ll be using the latter in my comments below since it contains the full album.

On the UK CD, “Christine’s Tune” has plenty of bass whomp, but the 4 Men with Beards pressing gives it a sharper sound and brings Jon Corneal’s drums out from the murk. It’s less crowded than the CD, but Intervention’s pressing expands and fleshes out the music even more, to give more bottom-end energy to the bass than either of the other versions -- the bass really hits -- and it separates the guitars better in the left and right channels. The voices are clearer on the new pressing, and Corneal’s drums have more life and sparkle.

The Burritos’ cover of two soul songs show how close the strains of southern music can run. “Do Right Woman” and “Dark End of the Street,” both by Chips Moman and Dan Penn, had been hits for, respectively, Aretha Franklin and James Carr. The versions on this album add some twang and pedal steel and, with the close vocal harmonies of Parsons and Hillman, give the songs a country feel. Their soul connection remains in Chris Ethridge’s popping bass lines.

In both cases, Ethridge’s bass on the new LP is rounder, fuller, and more convincing. Parsons’s voice has more character, and his harmony vocals with Hillman are more tightly locked. On the CD, both tracks now sound especially bland to me, but after hearing this new LP, even the 4 Men with Beards pressing sounds thin. 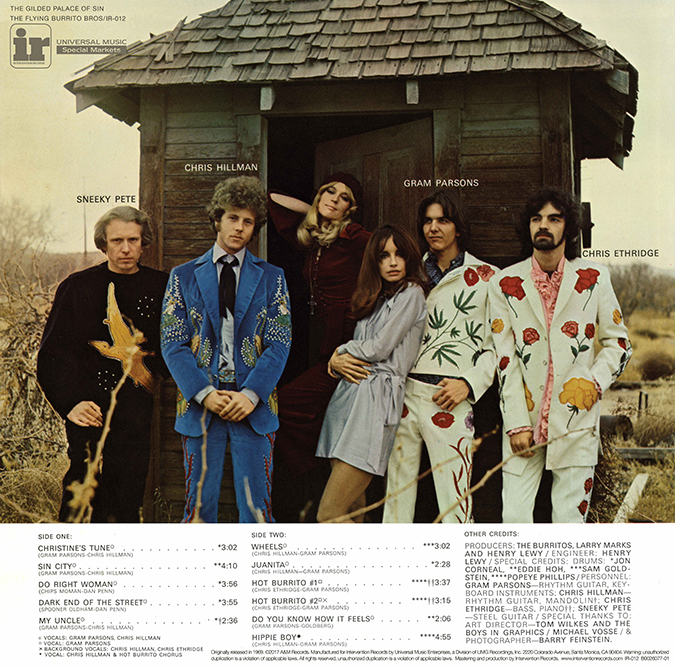 Parsons loved southern gospel, and “Sin City,” which he wrote with Hillman, is a strong tale of dissolute living and the Almighty’s wrath. Kleinow’s pedal steel sounds more fluid and full on the new pressing, with better harmonic overtones and less glassiness than on the CD and the 4 Men LP. Parsons and Hillman sound more in sync, their voices harmonizing in a way that sounds natural and easy.

The new LP leaves my CD and LP, and the tracks on the compilation CD, in the dust. The guitars have more twang, Kleinow’s pedal steel more whine and sustain, Ethridge’s bass more attack and rhythmic life, and the soundstage is wider, deeper, and more alive with sound. And this reissue makes even more obvious that Chris Hillman was Parsons’s equal in this band. It highlights how skilled and versatile he was as a guitarist, and how crucial he was as both a harmony and lead vocalist.

Gram Parsons, who died in 1973, recorded very little. All of it is worth having, but The Gilded Palace of Sin is a standout, and an essential album of American music. I don’t have an original A&M pressing of it -- at 13, I just wasn’t hip enough to buy it -- but I’d be very surprised if it sounds as good as Kevin Gray’s skillful remastering for this Intervention Records reissue. It’s still no sonic masterpiece -- the bottom end is a bit pushy at times, but Gray has given the album a better balance that lets the music expand and reach out. Cosmic American Music, indeed.