On June 1 of this year, Sgt. Pepper’s Lonely Hearts Club Band turned 50 years old. Let that sink in for a while. To mark the occasion, Apple and Universal Music have released a lavish boxed set comprising four CDs, one DVD, and one BD. The DVD and BD include a 1992 documentary, The Making of Sgt. Pepper (sic), plus high-resolution 5.1-and two-channel mixes of the album, along with the same treatment given to “Strawberry Fields Forever” and “Penny Lane.”

CD 1 is a new stereo mix of the original album, CDs 2 and 3 comprise studio outtakes that give some insight into how the album developed, and CD 4 is the 1967 mono mix, plus “Strawberry Fields Forever” and five other tracks, all in mono. When Beatles producer George Martin and engineer Geoff Emerick mixed Pepper’s, they spent three weeks on the mix for mono playback, by far the more popular medium at the time, and three days on the stereo mix. The Beatles themselves were often involved in the mono mixes of their recordings. Giles Martin, George’s son, and Abbey Road engineer Sam Okell did the new stereo and surround mixes.

I compared the new stereo remix to the 2009 CD remastering, which was not a remix. The opening crowd noise sounds deeper and wider on the new CD, and Paul McCartney’s voice is closer to the center. On the 2009 CD, which used the original stereo mix, McCartney’s voice and other sound elements throughout Pepper are panned harder to left and right. 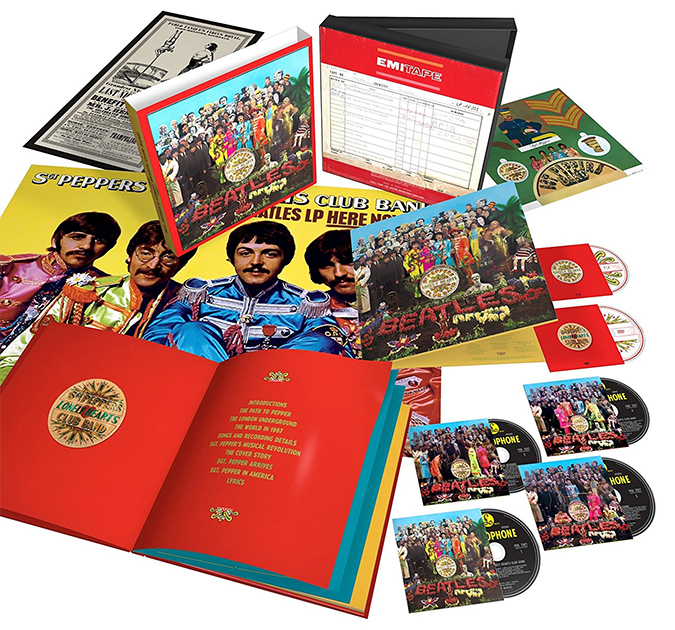 Giles Martin has brought Ringo Starr’s drums forward throughout the album, without overemphasizing them. His snare has more impact and his hi-hat is brighter. McCartney’s bass lines are also stronger throughout. It’s the small details, however, that make the new mix so compelling. The electronic harpsichord in “Lucy in the Sky with Diamonds,” for example, spreads more widely across the soundstage, and is more enveloping. The guitar effects in this track are easier to hear, and John Lennon’s voice is set off more.

The electric guitar that begins “Getting Better” is sharper and livelier in the new mix, and bits of percussion and hand claps sound stronger and more full bodied. The sitar and tambura in “Within You Without You” sustain longer and come farther out into the room, and the complexity of the arrangement -- the interaction of George Martin’s orchestral string arrangement with the Indian instruments -- comes through with greater force. George Harrison’s voice has more presence and the song sounds grander.

In short, the new stereo remix has some of the energy and balance of the 1967 mono mix on disc 4, which was also the basis for the mono release of Pepper’s included in The Beatles in Mono boxed set (2009). The new stereo mix pulls the music together more coherently than the original, and also brings out individual instruments and effects without pushing them forward -- it’s not a radical reimagining of the recording. Instead, Martin and Okell have given us a more vibrant and exciting version of Sgt. Pepper’s that lacks the recording artifacts that placed the album firmly in 1967.

The new stereo remix is the basis for the high-resolution stereo versions on the DVD and BD, respectively labeled “LPCM Stereo” and “LPCM Stereo 96kHz/24bit.” I heard more detail and immediacy when I switched from CD to DVD, but the BD is truly astonishing. The mix is the same, but the clarity and resolution on the BD brought me further into the recording. Guitar chords had more harmonic richness, percussion had more impressive fullness and power, and voices were more realistic. Small details, such as the series of seventh chords Lennon plays in “When I’m Sixty-Four,” sounded more alive and there in the room with me.

The two discs of outtakes demonstrate how, for example, “Strawberry Fields Forever” developed in the studio. A stripped-down take of “When I’m Sixty-Four” reveals that the basic melody was so strong that the embellishments only added to it. In a series of takes, the Beatles and some guests attempt a hummed version of the final chord of “A Day in the Life.” The instrumental tracks for “She’s Leaving Home” and “Within You Without You” are impressive and beautiful by themselves, but the former depends on McCartney’s vocal to be a song; the latter can stand alone. 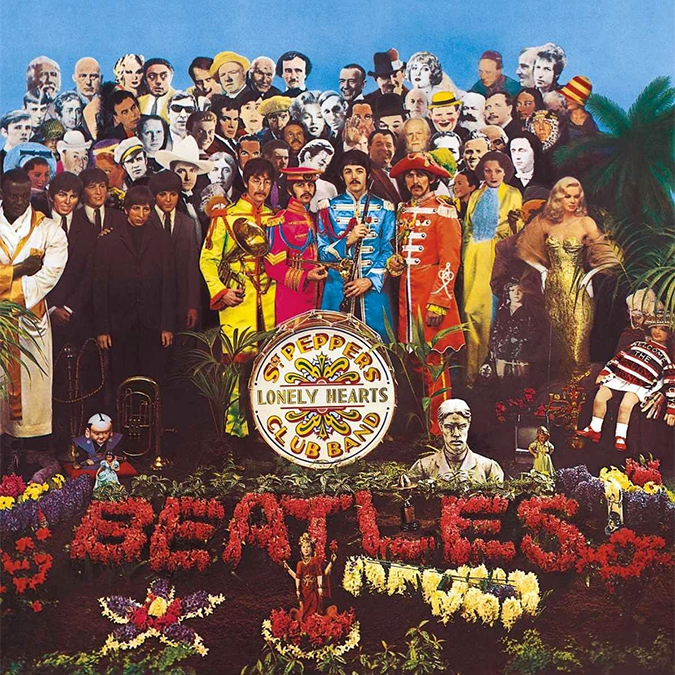 And so on. It’s worth hearing Harrison explain what he wants from the Indian musicians who play on “Within You Without You,” and the various takes of other songs show the tremendous amount of work that went into Sgt. Pepper’s. Scholars and Beatles obsessives (guilty as charged) will be happy to have these two discs, but my guess is that I’ll play them as rarely as I play the Anthology series, which I own on CD and vinyl.

The surround versions of the album on the DVD and BD are worth hearing, but I should point out that the surround sound in my home theater is not of audiophile quality. The surround mixes of “Within You Without You” and “A Day in the Life” are immersive, and I want to explore them and some of the other tracks further with friends who have better surround systems. Overall, the surround mixes seem tasteful and intelligent, with the BD DTS-HD Master Audio 5.1 mix sounding best.

I welcome the return of The Making of Sgt. Pepper, the 1992 documentary that marked the 25th anniversary of the recording. McCartney, Harrison, Starr, and George Martin reminisce, and Martin’s breakdown of some of the tracks is especially interesting. Add to that the three-dimensional lenticular version of the album’s cover photo on the slipcover, a 144-page hardcover book detailing many aspects of Pepper’s, the re-creation of the LP jacket that houses the six discs, two posters, and a solidly constructed container with a photo of the master tape box, and this release is something any Beatles fanatic will buy on impulse.

I have six copies of Sgt. Pepper’s on vinyl, three each in stereo and mono, plus three copies on CD, one in mono. I like each of them in different ways. The panning on the stereo versions is something that I associate with the record, and places it in a specific era. I’ve always enjoyed the energy and centered qualities of the monos. And it goes without saying that I prefer Pepper’s on vinyl. However, the new stereo version on BD is as close as any digital music format has come to the qualities I associate with vinyl, and the new mix is more revealing.

I often think of Sgt. Pepper’s Lonely Hearts Club Band as the only dated Beatles LP -- until I play it. It stands up well as a collection of songs full of the wonder of how much can be done in a recording studio, and how far three songwriters could stretch their talents. Part of its popular and critical standing can perhaps be explained by the fact that 1967 was such a crucial year in rock’n’roll, and that Sgt. Pepper’s seemed to embody the energy, positive vibe, and sense of endless possibility that the Summer of Love represented. I’ve spent the last few weeks immersed in it, and haven’t tired of hearing it.