Neil Young wrote and recorded Tonight’s the Night in the late summer of 1973, shortly after two close friends died of heroin overdoses. Danny Whitten had been a singer and the rhythm guitarist for Crazy Horse, Young’s backing band, and Bruce Berry was Young’s roadie and friend. Young’s studio recording of the previous year was Harvest, which was hugely popular and put him firmly in the mainstream. Tonight’s the Night was a more emotionally difficult album, sloppier in execution -- and one of his best.

Whether because of hesitation on the part of Young or his record label, Reprise, Tonight’s the Night wasn’t released until 1975. By then, Young had brought out a two-LP soundtrack album, Journey Through the Past (1972); a live album, Time Fades Away (1973); and a studio effort, On the Beach (1974). The latter two reflected his disappointment at the cost of fame, the loss of friends, and the fading of 1960s idealism.

When Young and the band he used for most of Tonight’s the Night, the Stray Gators, appeared at the Roxy, in Los Angeles, in September 1973, they’d just finished recording the album, which has the feel of a loose, boozy, dark night of the soul. After Bill Graham introduces Young, the singer cracks some jokes to preemptively lighten the mood of what’s to come.

The band begins Tonight’s the Night Live with the album’s title track, Young on piano and Nils Lofgren setting things up with searing, sharp-edged guitar lines. After weeks of playing it on the road and recording it in the studio, the band had settled into the song -- while it feels tighter than in the grief-filled studio version, Young sings it with a powerful mix of anger, sadness, and bewilderment.

Young’s electric guitar in “Mellow My Mind” rocks a bit harder than in the studio version, and Ben Keith’s pedal steel adds an even stronger undercurrent of melancholy. “World on a String” sounds much as it does on the studio album, but again, Young sounds as if he’s feeling anguish and loss, and the guitars have a little more bite. Throughout Roxy, the band is more confident than on the studio album, especially drummer Ralph Molina, who plays with more drive and firmness. As a result, the performances flow with a bit more ease. 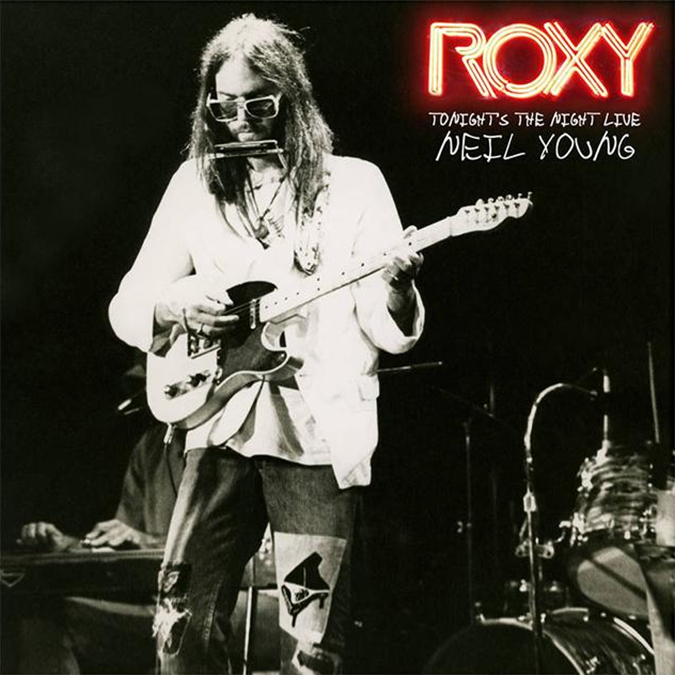 Even though it is a studio recording, Tonight’s the Night has a first-take rawness -- the work of musicians expressing grief among themselves, fueled by alcohol and whatever else was around. Performing the music live gives it a different kind of intimacy. Young wisecracks through the show, but when the band plays, they can be felt reaching out to the audience, to pull them into these powerful songs. “That’s enough sun, man. This is a sad song,” Young says in his introduction to “Tired Eyes.” His guitar is harder-edged in the slower live version, and he sings with even more anger and confusion.

“Tonight’s the Night, Part II” is even more dirge-like than it was in the studio, and Young sings with an intensity that more fully expresses his fury at the loss of his friends. The closing song is “Walk On,” which would open On the Beach.

The music on this album’s 53 minutes is some of the most nakedly emotional a musician has ever played onstage. The audience’s applause is heartfelt, but it would be two more years before Tonight’s the Night would appear on record -- I wonder how much of the confessional power of the songs reached them.

Chris Bellman, of Bernie Grundman Mastering, has handled Young’s reissued catalog as part of the Neil Young Archive Series, and his work on the all-analog LP editions have been examples of how to make good-sounding recordings sound even better and more revealing. Roxy: Tonight’s the Night Live puts you so close to the stage that, at the beginning of “Tonight’s the Night,” you can hear the sympathetic rattling of Molina’s snare drum in response to the low-end power of Billy Talbot’s bass. Young’s voice is centered and holographic, and each instrument registers precisely on the soundstage.

The vinyl was pressed at Pallas in Germany, and it meets their usual standards for flatness and quiet grooves. The music is pressed on three sides; stamped into side 4 is the Roxy’s logo.

This live version of one of Neil Young’s best albums is an important addition to his catalog.