The Super Deluxe Edition comprises a CD of the new remix by Giles Martin and Sam Okell, two CDs of session outtakes, and a BD comprising the remix in three formats: surround mixes in Dolby Atmos and 24-bit/96kHz DTS-HD Master Audio 5.1, and two-channel 24/96. A three-LP Super Deluxe Edition is also available, as is a picture disc, a two-CD Deluxe Edition, and single CD and LP editions of the remix. Miles Showell cut the lacquer for the vinyl from the digital files created by Martin and Okell. The same team performed those functions for the 50th anniversary editions of Sgt. Pepper and The Beatles.

Eager to compare the vinyl version of the remix with my favorite copies of the album, I bought the single LP. I’ve thinned my collection of Abbey Road albums down to five: two from Japan, one from Germany, and mid-1970s LPs from the UK and the US. In this review I focus my comparisons on the UK LP -- a fifth pressing from mid- to late ’70s -- and a 1976 Japanese pressing, with a brief mention of the US copy.

I dropped the needle on “Come Together” on my UK copy of the album, then switched to the new pressing. On the earlier copy Paul McCartney’s bass is full, with plenty of attack and a satisfying, slightly trebly snap. The guitar riff in the left channel is clear and audible, and the slap echo on the sung “Shhh!” travels solidly toward the center. On the new pressing, McCartney’s bass sounds fatter but lacks the definition and sharpness of the original mix. The slapback is softened and decays more quickly. Ringo Starr’s hi-hat cymbal is also more muted, and his drum rolls are relegated to the background. The voices sound mostly the same as on the original, but are now slightly veiled. 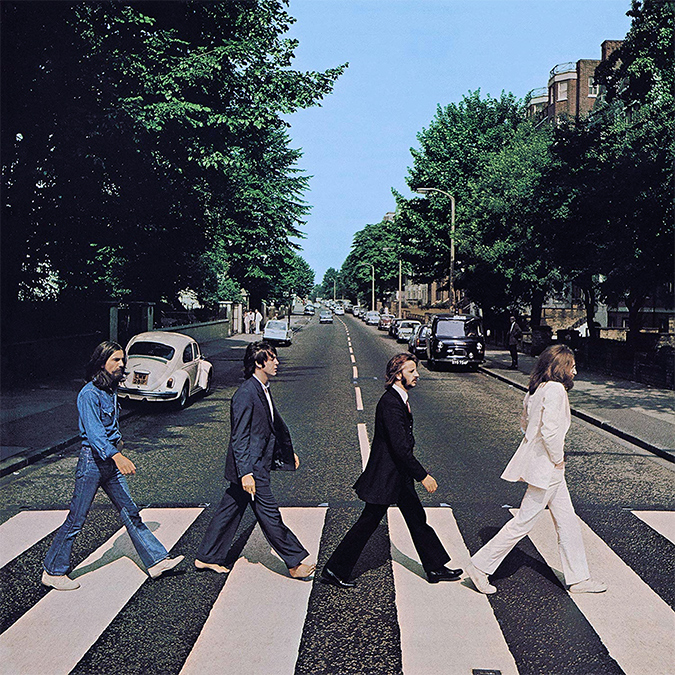 My Japanese copy of the LP is just a bit more emphatic on the top end than the original, but not unpleasantly so; for the most part, I feel it comes closer in spirit to the UK pressing than does the new LP.

Ringo’s drum roll in “Something,” is more reserved on the new pressing, but George Harrison’s lead vocal is more focused, and the occasional double tracking of his voice is presented with better separation. The strings sound harmonically fuller on the new pressing, but the interaction of Billy Preston’s organ with the strings is easier to hear on the UK vinyl. As in “Come Together,” McCartney’s bass is full but lacking in attack. Another switch to the Japanese pressing showed it to be a bit tipped up, but closer in overall effect to the UK pressing.

Harrison’s acoustic guitar in “Here Comes the Sun” sounds more natural on the new vinyl, where his lead vocal has been shifted from the left channel to the center. His harmony vocals in the right channel are set apart better in the new mix. The strings have been moved back on the soundstage just far enough to better support Harrison’s voice, and they’re harmonically deeper. Ringo’s drums sound more forceful on the UK pressing, Paul’s and George’s hand claps in the right channel are brighter, and the synth lines are more prominent -- though they sound more natural in the new mix.

Paul’s voice in “Oh! Darling” is warmer toned and more refined in the 50th-anniversary pressing, and his, John, and George’s harmony vocals are more layered -- but the slashing guitar strokes in the right channel are duller and Paul’s piano, while sounding fuller, is also more reserved. Billy Preston’s organ is remixed so low in some sections of “I Want You (She’s so Heavy)” that it’s almost inaudible, and John Lennon’s anguished scream at the end of the final verse is less chilling.

Some changes made in the new mix are improvements. The harmony vocals in “Because” are luxurious, and presented across a wider soundstage. Harmony vocals throughout the album have more body, depth, and complexity. Some guitar parts peek through better, the brief guitar solos in “The End” are now spread across the stage (Paul at left, George at right, John at center), and the buildup in the final third of “I Want You” is easier to follow. Overall, the album now sounds more balanced and nuanced, and gives a better picture of the way the elements of the songs work together. 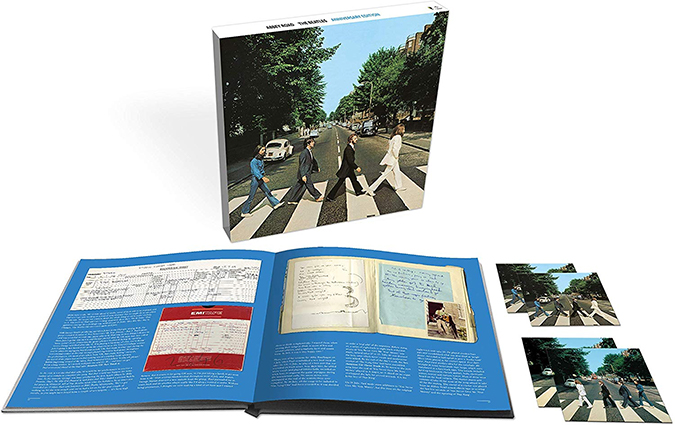 But it doesn’t rock the way the older pressings do. Even the mid-1970s US pressing I own is exciting and, where needed, gritty -- it’s more compressed than the other LPs I have, but has the same excitement and vigor as my UK pressing. As I listened to the remix, I found things to like, but I doubt it will supplant the UK or Japanese pressing I used for comparison. By contrast, Martin and Okell’s remix of The Beatles, from last year, is so good that I often find myself preferring it to the earlier pressings I own.

My copy of Abbey Road was dished and slightly warped -- the flaws didn’t affect playback, which was quiet and otherwise good, but they’re more examples of an unfortunate trend in vinyl pressing. Of the ten or so new vinyl pressings I’ve bought in the last couple of months, five are slightly but noticeably warped or dished. Perhaps pressing plants are having trouble keeping up with demand -- these discs were pressed in the US, Germany, and the Czech Republic. Whatever the reason for this problem, I hope vinyl manufacturers address it.

Abbey Road brought to a close one of the great careers in popular music. If you don’t have a copy of it on vinyl, I suggest looking for a UK edition pressed before 1987, after which Beatles LPs were cut from digital masters. I also like the Japanese pressing referred to above, made by Toshiba (EAS-80560). This 50th-anniversary edition has some merit, but ultimately, I think, it’s like the Mobile Fidelity Sound Lab pressings of Beatles albums I’ve owned in the past: revealing, interesting as an alternative to other pressings, but lacking the essential fire of the earlier LPs.