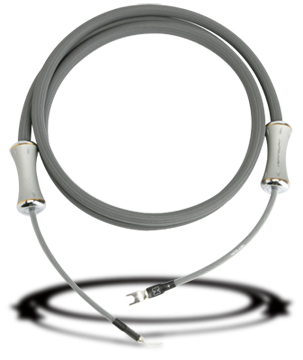 I enjoy doing cable reviews . . . but nothing seems to get audiophiles more stirred up than criticisms of their speakers or cables. Critiques of anything else seem permissible, but cables and speakers . . . say the wrong thing and you’ll get e-mails for weeks. I know this because I visit audio forums and message boards, and I read what the cliques have to say about what reviewers have written about their favorite cables. A lot of the time, what these folks seem to forget is that reviewers need to use a unique set of standards in choosing cables.

For example, my reference cables are made by Dynamic Design. I chose them because they sound neutral -- they allow me to hear and break down exactly what’s going on in a musical performance. This is critical in reviewing; any audio writer who does his or her job not only listens for audible differences among components, he or she also tries to find why those differences occur. My reference cables are neutral enough that I don’t have to worry about what they’re doing; I can focus on the sounds of other components in the system.

I’m also quite fond of Argento’s top cable models, because they make my system sound more musical -- not necessarily more accurate, but definitely more enjoyable to listen to. Don’t get me wrong -- I very much enjoy listening to music with my Dynamic Designs. I just enjoy it a little more with the Argentos. One company’s cable helps me make more fair and accurate assessments of the audio gear I review; the other company’s cable helps me to enjoy listening to music more.

I received a call from Jay Bertrand, of Bertrand Audio Imports. He offered to loan me review samples of a new cable he’d come across, made by Hemingway Audio, a Korean company. I’ve known Jay for a while -- he was one of the first audio distributors I met when I began reviewing audio gear. At first I was a bit leery of the claims he was making for how good the Hemingways sounded, but his descriptions of how something performs have usually been spot on. He’s proven me wrong when I’ve doubted him in the past, and he generally represents brands that sound exceptional. I concluded that it would be an interesting exercise to review the Hemingway Prime Reference Mk.II speaker cables, interconnects, and AC cords. 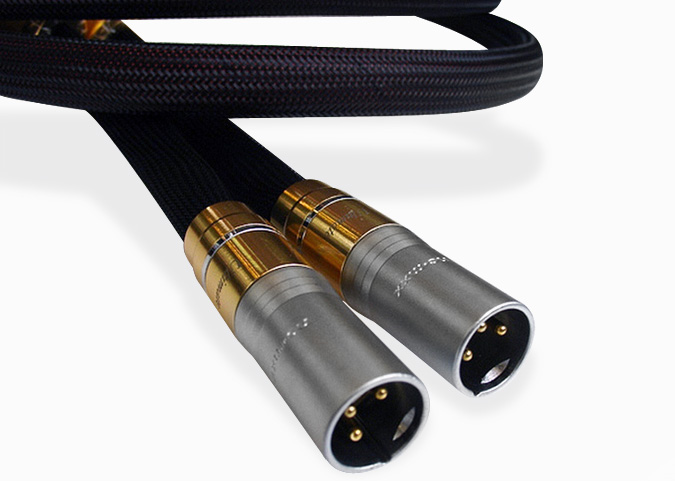 When the Hemingways arrived, and I immediately noticed how impressive they are to look at. They’re sheathed in a brownish-maroon mesh jacket and are of medium stiffness -- I had no problems fitting them between the various components in my rack. The conductors of the Prime Reference Mk.IIs are made of what Hemingway calls Functionally Perfect Copper, all solid-core and 99.99999% pure. In an elaborate, detailed process, the conductors are wrapped in layers of Teflon, urethane, and silicon, and the XLR connectors are high-end Neutriks. Their overall look and feel inspired confidence and gave the impression of a top-quality product. Equally impressive was the build quality of the speaker cables, which have robust spade connectors. The Prime Reference Mk.II power cord has high-quality, impressively built IEC connectors.

The cables’ most important design feature is what Hemingway calls Frequency Modulation Cavity Fundamentals (FMCF) technology. As the company explains it, the speaker cables use a filtering network that removes impurities, or noises, that get in the way of the signal, theoretically allowing only the music to get through. The proof would be in the listening.

My first impression was that my system, which already sounded open and extended at both extremes of the audioband, and natural everywhere in between, was even more so with the Hemingways. It felt a bit strange at first, hearing my music a little differently, but I was enjoying it. After a few days of that, I put on my reviewer’s hat and begin to dissect what I was hearing.

I was able to hear deeper into the music than before, so I knew my system’s resolution had improved. Some instruments seemed to have more bloom. Brass didn’t just have bite, but bit with a more realistic tone and timbre than with my previous reference Dynamic Design cables. The sounds of struck triangles and xylophones resonated more purely, and lingered ever so slightly longer. Drum whacks seemed more violent, with more physical impact -- but at the same time, brushed drum heads sounded more delicate, even sweet. I felt I could almost count the bristles in each brush. 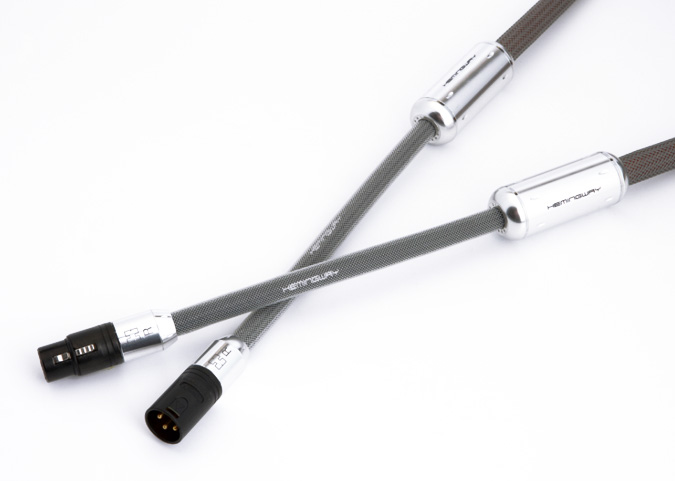 The Hemingways initially struck me as being more open and detailed; music emanated from quieter, “blacker” backgrounds. This sonic brilliance and liveliness was consistent, whether I was listening to a solo voice, an acoustic piano, a big band, or a symphony orchestra.

The Prime References’ reproduction of high frequencies was extended and airy. Transient response was fast, as were the attacks and decays of notes, especially those of the acoustic piano and guitar. Voices were reproduced with a lifelike naturalness. Bass sounded fast and accurate, with detail more easily heard than I’m used to. When a double bassist such as Christian McBride or Ray Brown is really feeling it and popping his strings, I could more clearly hear the pitches of the notes. Likewise, double basses and timpani in orchestral works had a greater sense of ease, with detail that was more audible and easier to follow. Mind you, my reference Dynamic Designs do all these things extremely well; the Hemingways did them just a bit better.

I like Hugh Masekela’s Hope (CD, Triloka 82020) for the way it captures the live event: the energy of the crowd, the exchange between audience and players. The Hemingways did an excellent job of allowing the passion in Masekela’s voice and virtuoso trumpet playing to shine through without overpowering the emotionally charged “Stimela.”

Then I went to another extreme: Nora Jones’s Feels Like Home (CD, Blue Note 84800). I really got into this album, especially after the recent passing of one my favorite singers when growing up, Phoebe Snow. Tracks such as Jones’s “Those Sweet Words,” “Carnival Town,” and “Toes” are as soft and sweet as a mother reassuring her child that she will still be there, even after she’s turned out the lights for the night. The Hemingways did a good job of genuinely communicating Jones’s comforting, soothing way with a tune, without allowing any aspect of the sound to get in the way of the music. 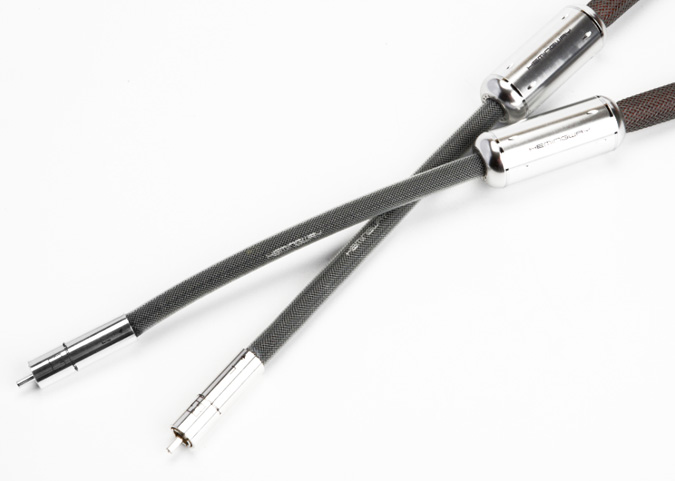 One of the classical discs I listened to was Bruno Walter and the Columbia Symphony Orchestra performing Beethoven’s Symphonies Nos. 4 and 6 (CD, Sony Classical 64462). I’ve always wondered if Walter had some influence with his engineers; his recordings sound consistently warm -- not dark or rolled off, but natural. I particularly enjoy their realism and depth of soundstage. It’s like watching an ocean liner moving steadily and smoothly through the waves as a storm slowly approaches. The Hemingway cables let me feel the extension and power of the bass in these recordings, and accurately portrayed the front-to-back layering of the various sections of the orchestra.

Hemingway Audio’s Prime Reference Mk.II speaker cables, interconnects, and power cords were sonically revealing and an absolute joy to listen to. They’re extremely well made, and their connectors all fit tightly and snugly, but not too much so. They performed optimally with both tubed and solid-state gear, which not only allowed me to hear the strengths and weaknesses of electronics of any type, but also made it easy for me to enjoy whatever music I was listening to. More important, they not only made an incremental improvement in the sound of my system, but would make excellent reference tools: They helped me dissect what I was hearing without pressing their own agenda.

As I write this, my reference Dynamic Design cables are back in their places in my system, sounding awfully good as they help me review a pair of speakers. At the same time, I realize that, for the weeks the Hemingways were in place, I was hearing just a little bit more of my music, and that little bit more completely blew me away. I couldn’t believe I was hearing even more music, detail, and presence, along with deeper, more impactful bass. It was one of those rare occasions when I was sorry to see review samples leave my system. Even though they are very expensive, I very highly recommend them for the most revealing systems.