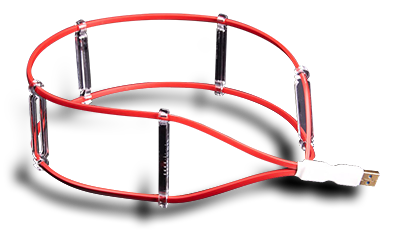 The name Light Harmonic may not at first sound familiar. But most audiophiles are at least aware of their Da Vinci 384kHz DAC ($20,000 USD), which was a legend in its time, and the even more over-the-top Da Vinci Dual DAC ($31,000). As of this writing, those two ultra-high-end DACs and the subject of this review -- the LightSpeed USB cable -- are Light Harmonic’s only retail products. Given so few models and such high prices, you can bet that Light Harmonic is laser-focused on performance, both objective and subjective. At $1399 for the 1.6m length, the LightSpeed is a seriously expensive USB cable -- there’d better be a darn good reason to spend so much money on it.

Light Harmonic decided to separate the wires carrying power from the wires carrying the digital audio signal. The LightSpeed has a single connector on each end, but between the connectors run two bright-red cables, kept some 2.5” apart by a series of clear acrylic spacers. That’s not the LightSpeed’s only unique feature. Light Harmonic claims to have devised a cable geometry capable of transmitting data 20 times faster than USB 2.0’s highest speed, and twice as fast as USB 3.0’s highest. They say that this speed results in a “bit-perfect” cable.

Light Harmonic’s specifications for the LightSpeed indicate that its signal conductors are of silver-plated, high-purity copper; unplated high-purity copper is used for the power conductors. The USB connectors are of phosphor bronze coated with 30µm of gold plate. The dielectric (insulation) comprises five layers, each of a different material. The geometry of the wires and insulation result in the two conductors being roughly equal in size, each with a square cross-section. You might think that, with five layers of insulation, the conductors would be large, but they’re not. I wouldn’t call them small, but they certainly aren’t big. You might also think that five layers of dielectric might make the cables stiff, but they flexed quite easily.

There are two versions of the LightSpeed, depending on the DAC used. I used the two-connector version with a USB Type-A connector (the largish, flat, rectangular connector that plugs in to most computers) on one end and, on the other, a Type-B connector (a medium-sized square or D-shaped connector that will plug into most DACs). The other version has two Type-A connectors on one end and one Type-B on the DAC end. One of the A connectors is for the power conductors, the other for the digital-audio signal conductors. The three-connector version can be used with self-powered DACs like the Da Vincis. Light Harmonic says the power conductors are needed for the “negotiation” phase: when you turn on the computer and/or DAC, but after you “see” the DAC on the computer, you could disconnect the power cable completely and run only digital audio data to the DAC. The price is the same for either version of the LightSpeed. 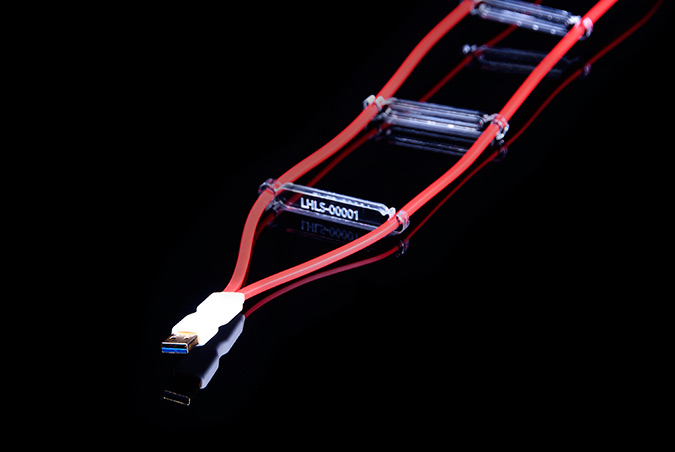 I can’t recall ever hearing of a warranty like the one Light Harmonic offers for the LightSpeed: lifetime, transferable to any subsequent owner, no matter how many times the cable is sold, traded, or given away. Nor do you need proof of purchase -- no receipt, no product registration, nothing. If you have a problem with the cable at any time, Light Harmonic will fix it.

The sound of my system with the LightSpeed cable installed was detailed and spacious, very clean, with a silent level of background noise. It was also dead neutral. When I listened to “Gimme Shelter,” from the 2002 remastering of the Rolling Stones’ Let It Bleed (16-bit/44.1kHz FLAC, ABKCO), the relatively simple opening emanated from a velvety black silence, and was suspended in mid-air between the speakers. The effect was a bit chilling -- it was the quietest I can recall ever hearing it. Drums are played rather softly during this passage, and these often tend to be somewhat obscured -- but even though the volume level wasn’t high, the drumming was still clean, clear, and present. The strongly struck grand-piano chords that enter about 30 seconds in, while not at the front of the mix, are struck rather powerfully, and this was clearly evident. Though not a particularly loud element of the mix, the definition and growl of those chords was impressive. As “Gimme Shelter” progresses, more and more elements are added, until the mix is fairly dense and rich. As the complexity increased, the clarity remained excellent, allowing each sound to be heard. I listened to the track several times in a row, following a different instrument or two each time, and had no trouble doing that. Only the bass guitar was a little difficult to keep track of, but I blame that on the mix rather than any deficiency of the LightSpeed or anything else in the system.

Continuing the non-audiophile recording theme, I played the “I Am the Walrus” section of the Beatles’ Love (24/96 FLAC, Capitol DVD-A), which comprises remixes and combinations of classic Beatles tracks. From the beginning of this track, I was struck by the thick opacity surrounding the recording -- yet individual sounds were extremely clear and defined. You might think that opacity would ruin the sound, but it didn’t. “Walrus” was still enjoyable, despite the recording’s imperfection. 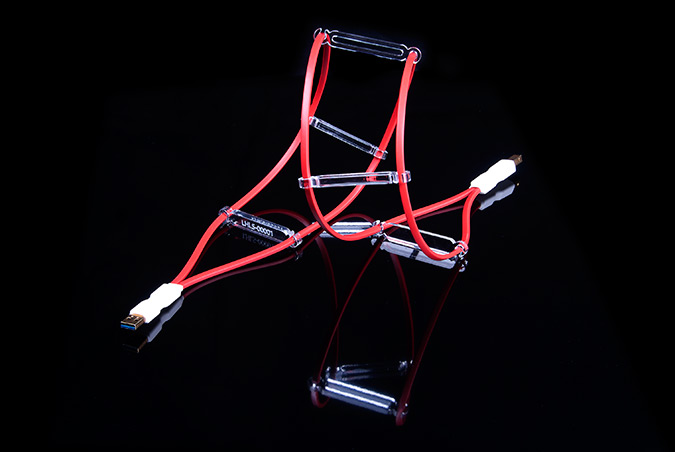 Moving on to something that’s a bit more in the audiophile vein, as well as being kickass music: “Chan Chan,” from Buena Vista Social Club (24/96 FLAC, Nonesuch DVD-A), has a spacious but contained sound that accurately reflects the medium-size recording venue. Each instrument and voice was well placed in space and sounded very natural. The sound was extremely present in the room -- it sounded very close to a live performance, not a recording of one. It’s a strange thing to say that you can “hear” the air in the recording venue, but it sure seemed as if I could. The stringed instruments were all ultra-clear and present, each unique in its sonic character. From the very first note, it was clear that the bassist was playing an acoustic instrument. Even though there can be a fair number of instruments playing at the same time, each remained sonically differentiated even as a sense of the musicians’ interplay was preserved. The trumpet was scarily present -- brassy and dynamic, yet nuanced. Inflections and trills were easy to detect and follow, especially when I closed my eyes.

During my extended listening to the LightSpeed USB cable, I never heard anything I didn’t like. It was enjoyable with everything, from the best audiophile-grade recordings to sloppily captured pop and rock, even old Phil Spector hits -- as much as I wish they’d been much better recorded, it was impossible not to enjoy the music.

First up was a generic USB cable, its woven braid visible under its clear outer jacket, and a ferrite near the USB Type-A connector. After the LightSpeed, it didn’t sound so much bad as disappointing -- music seemed more congested and thick, slower and less joyful (if that’s even possible). A good word to describe the sound is indifferent -- not bad, not great, but like a meal at a nothing-special diner. “Chan Chan” was definitely less spacious, and lost its live-in-the-room character -- it sounded more like a recording. Things were still sort of distinct, but seemed to overlap and blend more, making it less interesting to try to follow a single instrument or voice through the song. In “Gimme Shelter,” Mick Jagger’s voice was far more recessed in the mix -- everything else seemed louder. I’m sure that’s how the recording is mixed, but through the LightSpeed his voice had more presence in the room, which made up for it being not quite as loud as the rest of the music. “I Am the Walrus” seemed to just lie there. The thickness was still there, but the entire track sounded more compressed, as if the soul had been sucked out of it. Time for something else.

AudioQuest’s top USB cable, the Diamond DBS ($699/1.5m), has been my reference for more than a year. It has solid-silver conductors and AQ’s patented Dielectric Bias System (DBS), in which an extra wire runs through the center of the cable. This wire is connected not to anything inside the cable, but to one side of a compact 72V battery. This creates around the cable a steady-state electrical field that’s more than large enough to encompass all fields created by the much-lower-voltage signals traveling through the conductors. AQ claims that this extra field conditions the dielectrics in the cable, making them perform far better than they can with only the weak fields generated by audio signals, or the USB power surrounding the cable’s conductors. There is no current flowing out of the 72V battery, so it will last as long as a battery that’s never used.

It was immediately apparent that the AudioQuest Diamond DBS and Light Harmonic LightSpeed sounded different from each other. The AQ had richer harmonics, with rounder, fuller tone from instruments and voices in every octave. But the LightSpeed delivered quieter backgrounds, more air, and an enhanced sense of a live performance in the room. Older, less well-recorded Phil Spector tracks were more enjoyable with the AQ Diamond -- the LightSpeed was a bit tough on them. “Chan Chan,” from Buena Vista Social Club, had more space, air, and presence in the room through the LightSpeed, but the Diamond delivered a wider soundstage and richer harmonics.

And for every track, bit depth, and sample rate, the story was the same. Don’t ask me to say that one cable was better than the other. What I really wanted was a cable that combined the LightSpeed’s and the Diamond DBS’s sound characteristics. But both were preferable to the generic cable.

Light Harmonic’s LightSpeed is a seriously good USB cable at a seriously high price. I can’t unequivocally say that it’s the best USB cable money can buy for every audiophile, because its sound is relentlessly neutral. Many audiophiles don’t want absolute neutrality -- it reveals too many recordings as being not very good -- and for them, the LightSpeed cable won’t be the best choice. But for those looking for the truth in music recordings, regardless of what that truth might be, I’m not sure it’s possible to do better than the LightSpeed USB.