The Ayre Acoustics AX-5 integrated amplifier, which I reviewed two years ago, was an ear-opening experience. At the time, I stated that “the AX-5 is not only, overall, the finest-sounding amp I’ve ever heard, it ranks as one of the finest components I’ve heard of any type.” The AX-5 featured a technology previously unused by Ayre, called the Diamond output stage, which has since been extended to Ayre’s top models, the R series.

How does one improve upon such exalted performance? When Ayre launched the AX-5 Twenty integrated ($12,950 USD), I was eager to hear if it could possibly top my impressions of the AX-5 ($9950 when available).

While the basic circuit topology of the gain stage was retained, several of the active devices (transistors) have been replaced with higher-performing equivalents.

There are two main changes in the power supply itself. For the input stage, Ayre has switched from a single-regulated, zero-feedback discrete regulator to a design in which one regulator feeds a second regulator, which then feeds the circuitry. This second voltage regulator is of a completely new type, developed by Ayre and called the AyreLock linear power supply, which locks the voltage to a very stable value. Ayre’s founder and chief designer, Charles Hansen, states that almost all power-supply regulators have at their heart a single series-pass active element. When the load draws more current, the pass element decreases its resistance to keep the voltage to the load constant. In the AX-5 Twenty, a second circuit element has been added. When the load draws less current, the second transistor draws more current to ground, which in turn locks the output voltage of the regulator; hence, AyreLock. 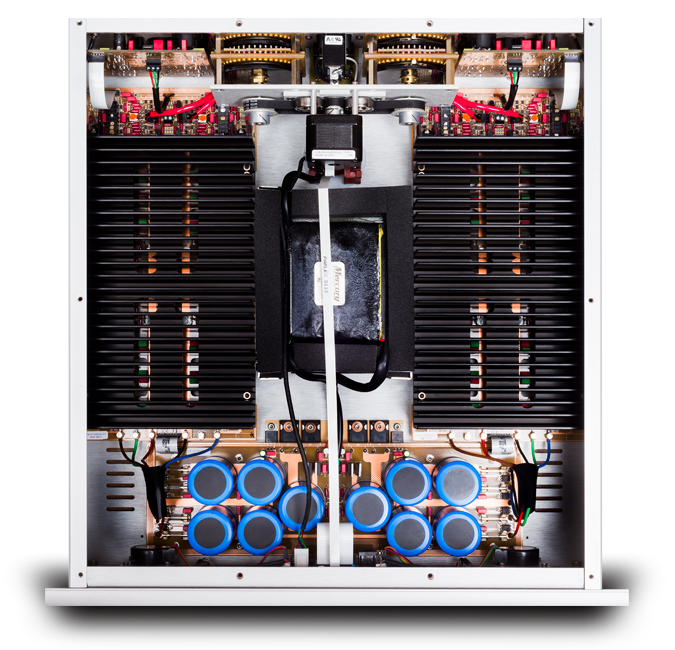 However, when it came time to implement these upgrades, Ayre’s engineers discovered that the original Diamond output stage produced too much heat to use in the Twenty. Therefore, Ayre rearranged the Diamond’s internal components so that while the amplifier still had a current gain of three stages of emitter-followers and a single-point drive at both the input and output stages, it now ran much cooler. There are now two modified Diamond buffers in each new output stage, which has been renamed Double Diamond. The AX-5 Twenty runs 40º F cooler than the AX-5 with original Diamond output stage.

The only change in the AX-5's brushed-aluminum appearance has been the addition of a gold-colored “Twenty” plate, just to the right of the volume control (the input selector is on the left). There is a central display between the knobs that shows the input selected and current volume level. There are still four balanced (XLR) inputs and two single-ended (RCA) inputs, as well as a single set of speaker outputs. AyreLink ports, an IEC power inlet, and a master power rocker switch round out the rear panel. The AX-5 Twenty is available in black or silver finish.

The AX-5 Twenty sent to me was fairly well traveled and needed no break-in, having been demoed at audio shows and retail shops. But despite its high mileage, this review sample was in immaculate condition; I had no problems with reliability.

Straight out of the box, the AX-5 Twenty sounded amazing. I was floored by the sound I heard from it, and -- after having them in my system for four years -- at last realized how competent my Revel Ultima Salon2 loudspeakers actually are. As good as the original AX-5 was, it never had me believing that the Salons could do any more than I’d heard them do when driven by other amps.

Transparency? In spades. It was as if someone had scraped sonic grunge off of even the most pristine recordings I had on hand. The AX-5 Twenty was so dead silent that I could hear well into recordings, and was able to hear previously inaudible details on familiar albums I’ve listened to for decades and thought I knew by heart. I kept scrolling through my collection, picking out albums I hadn’t listened to in years, just to hear how they’d sound through the Ayre.

Music seemed to pour from the AX-5 Twenty in a relaxed, effortless manner without sounding polite or laid-back, and the sense of rhythm and timing was spot on. Aural images were fully formed but without hyperdetail, and I spent many hours of fatigue-free listening.

Little cues that give a living quality to recordings, such as plucked strings, or singers’ faint inhalations and exhalations, were so vivid that the lines between recorded and live performance were blurred, especially with recordings of acoustic music. The Lake Poets’ Live from the Minster (24-bit/96kHz AIFF, Society of Sound Music/Bowers & Wilkins) demonstrated this quality perfectly. Performed by multi-instrumentalist and singer-songwriter Martin Longstaff (of whom I’d previously not heard), this is a wonderful collection of songs that my family and I thoroughly enjoy. The AX-5 Twenty relayed the warm, reverberant acoustic Longstaff was recorded in with a diffuse quality, but no sense of an artificial or spotlit soundstage. It sounded more like an in-person live performance than a recording of one. 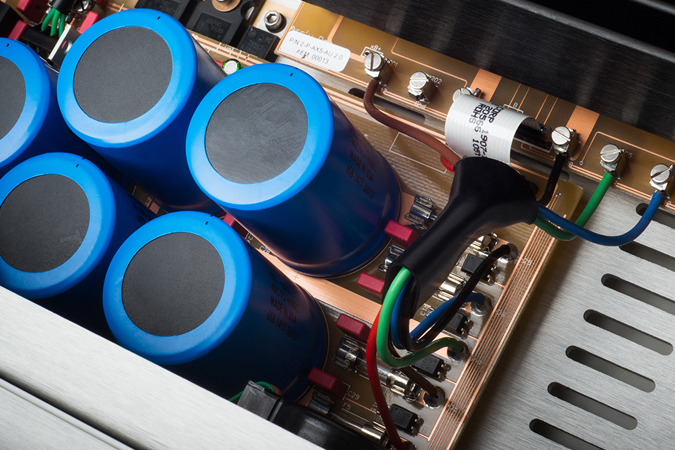 As with the original AX-5, I found myself listening at much lower volumes than I typically use with my 16-year-old Jeff Rowland Design Group Concentra integrated ($5600 when available). As a result, recordings of wide dynamic range, such as symphonic music and acoustic jazz, sounded excellent at low SPLs -- and spectacular when played loudly.

While critics have found the performances lacking, I’ve always enjoyed listening to Eiji Oue and the Minnesota Orchestra’s recording of works by Aaron Copland: Fanfare for the Common Man, Appalachian Spring Suite, and the Symphony No.3 (16/44.1 AIFF, Reference). I, too, have heard better performances of all three, but these are pretty good -- and the recording is a sonic spectacular that’s ideal for evaluating audio gear. The bass drums that open Fanfare for the Common Man had a weighty impact and resonance that were startling in their immediacy and physicality. There was no sense of compression or congestion even at very loud volumes, and the soundstage really opened up, wider, with the AX-5 Twenty goosing the Salon2s. The strings in both Appalachian Spring and the Symphony No.3 were silky smooth, with a lush tone that sent chills down my spine. My wife usually takes no interest in my hobby, but when I played Fanfare for her, even she was impressed.

As good as the AX-5 was with acoustic music, it was no slouch with recordings of rock or fusion. On Allan Holdsworth’s All Night Wrong (DSD64, Sony Music), bassist Jimmy Johnson and drummer Chad Wackerman sounded propulsive and meaty in “Lanyard Loop,” providing counterpoint to Holdsworth’s rhythm and lead-guitar licks. 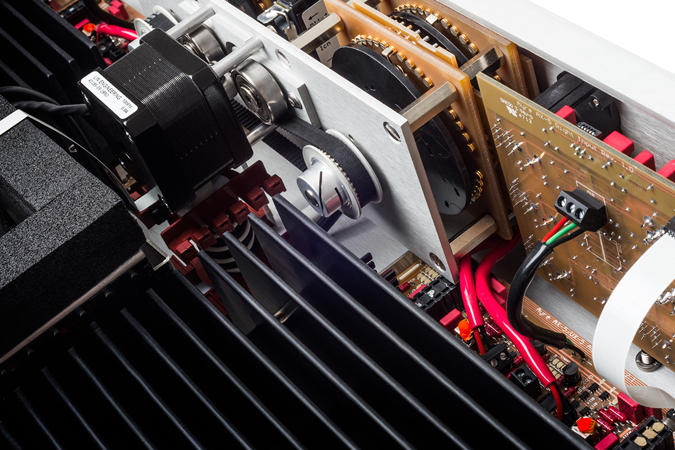 The AX-5 Twenty’s reproduction of bass was particularly notable -- it took a much firmer grip on the Revel Salon2s’ woofers than had the AX-5. A demo disc I received a few years ago from a hi-fi manufacturer contains a performance of unknown provenance of J.S. Bach’s Toccata and Fugue in D Minor. Last year, when one of my audio buddies was redoing his listening room and loaned me his subwoofer, this track gave that sub a real workout. I thought I’d need a sub of my own to experience such room-shaking impact, but apparently not. When this recording plumbed the lowest frequencies, the AX-5 Twenty reproduced those low pedal notes with authority -- my room shook with the same kind of resonances I’d experienced with my friend’s sub. Very impressive.

When I’d reviewed the AX-5, my 16-year-old Rowland Concentra had been no match for it, so I compared the AX-5 with my memories of the best qualities of the best amps I’ve reviewed: for treble, the ASR Emitter ($10,950); for midrange, the Esoteric A-100 ($19,000); and for bass, the Luxman L-509u ($10,000). While each of those amps had individual characteristics that I remember as being examples of excellence, and might still have surpassed the AX-5 in each of those categories, none was as consistently excellent across the board in every parameter as was the AX-5. But now, not only was the AX-5 Twenty consistently excellent across the board, it exceeded the midrange warmth and clarity of the Esoteric A-100 and the iron-fisted bass grip of the Luxman L-509u, and came oh, so close to the ideal of the ASR Emitter’s treble, which has a touch more top-end delicacy and sparkle. But that last is certainly no deal breaker. Not too shabby.

When asked what, if I had hedge-fund money to burn, would comprise my dream system, my stock answer has long been: a complete top-of-the-line system by MBL. While it doesn’t quite breathe that rarified atmosphere, Ayre Acoustics’ AX-5 Twenty, mated with my current speakers and sources, approaches that ideal more closely than does anything else I’ve heard. All of Ayre’s products can be upgraded as time passes and technologies advance, and the AX-5 Twenty is a shining example of this approach.

If you buy one, I’m confident that it would be the last amp you bought for a very long while, if not the very last. While not nose-bleedingly expensive, the AX-5 Twenty isn’t cheap at $12,950 -- even someone in my tax bracket needs to carefully consider the cost. In its defense, if you’re not wedded to the idea of a separate preamplifier and power amplifier(s), the AX-5 Twenty will likely meet all your amplification needs, and makes the case that, in most systems, a combo of separates is superfluous.

In my review of the AX-5, I said, “you can take this to the bank: By hook or by crook, the Ayre Acoustics AX-5 will be mine.” Unfortunately, for various reasons, that never came to pass. Now I’ve got a major crush on the AX-5 Twenty, but my wife has other plans. Although we’ve lived in our (fairly) new home for only seven years, she now wants to build a custom home -- and that, my friends, takes priority. I’m still working on her, but even if I have to wait: By the time that house is built, not only will she and I have a new home; the Ayre AX-5 Twenty will have one, too.