Falling Down the Discogs Rabbit Hole

Written by Jason Thorpe
Category: For the Record
Created: 01 January 2023

“When I’m too old and feeble to stop you, you’re probably gonna sell my record collection, right?”

“Oh yeah,” my 11-year-old daughter, Toni, answered with a roll of her eyes. Anything older than yesterday is not only irrelevant to Toni, it’s also utterly boring. Even the Doja Cat album I recently bought to try to tempt her into the world of vinyl was outdated by the time I’d ripped off the shrink wrap. So old dusty jazz records? Pfft. Not worth the time of day.

Toni’s been bugging me lately to give her tasks, jobs, and chores by which she can earn money for lunches, treats, and shopping. A couple of weeks ago I had the bright-spark idea of setting Toni on the task of cataloging my record collection. It’s something I’ve thought about doing myself, but really, who’s got the energy and time for that? I generally know what records I own and in which cube of my Ikea Kallax rack they reside, so what’s the point?

But thinking ahead a decade or two, I’ve decided it’d be nice if Toni had a method to determine what’s what and what it’s worth. As morbid as this sounds, it’s a way of getting ready for my death. A sort of logical decluttering. 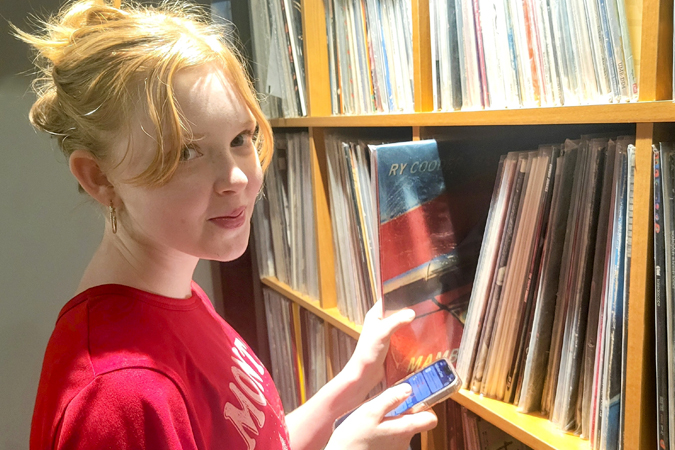 We installed the Discogs app on Toni’s iPhone, and I logged her in to my account. I’ve had a Discogs account for a number of years now, and I’ve got exactly two five-star-rated transactions to my name—one sale and one purchase. What’s really neat on Discogs is the provision to upload your records (or CDs) and store them in their database. Just enter the catalog number or title, and Discogs will present a list of possible matches. From there, you can drill down to see all versions of your chosen title. Hit the button that adds the record to your collection and you’re done.

All of this would be pointless if it were only to Discogs’ benefit. But the app allows you to download a .csv file that can be opened in Excel and contains all of the relevant information regarding your collection. You can also choose to sell any record in your collection through their site, which is, I guess, their side benefit.

I did the first few records myself, to get a feel for the process. Depending on the title, there can be a ton of different pressings, sometimes into the hundreds of versions. My collection is sorted alphabetically by last name, and the A’s weren’t too bad. Laurie Anderson LPs, for example, are worth only a few bucks, and there aren’t too many pressings, so it didn’t seem too difficult.

I showed Toni where to find the catalog number—sometimes it’s on the front or back cover, sometimes on the spine. If she couldn’t find it in either of those places, she could carefully decant the record and it might be on the label. She was absolutely thrilled when she discovered that there’s also a barcode reader. I let Toni loose with her phone. I promised her $20 (all prices in CAD) per cube as I really wasn’t sure how long it’d take her to get through that linear foot of records. Well, she ripped through two cubes in about a half-hour, so I think I’ll have to re-evaluate the rate. 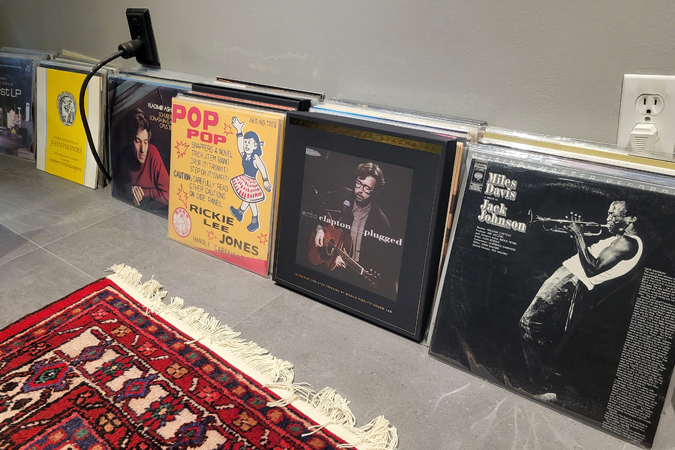 At that point, I felt it would be expedient to browse through the records she’d uploaded and double-check Toni’s work. As I expected, there were some inconsistencies. One of my Beatles Sgt. Pepper’s LPs was listed as a CD, and there were a couple of older pressings that weren’t correctly categorized. In the process of rectifying these errors, I fell down a bit of a rabbit hole. It can initially be difficult to correctly identify which version of a record you’re holding. I decided to process a few cubes myself to get a better feel for how it all works.

In doing so, I noted that there are filters you can use to help narrow things down. First off, I filtered by Format, choosing—obviously—Vinyl. Next I filtered by Country, using the “made in . . .” verbiage found either on the back of the jacket or the record label itself. Oftentimes this was nearly enough to drill down to the version I needed, but on some jazz LPs where there were a gazillion pressings, it was a bit trickier. 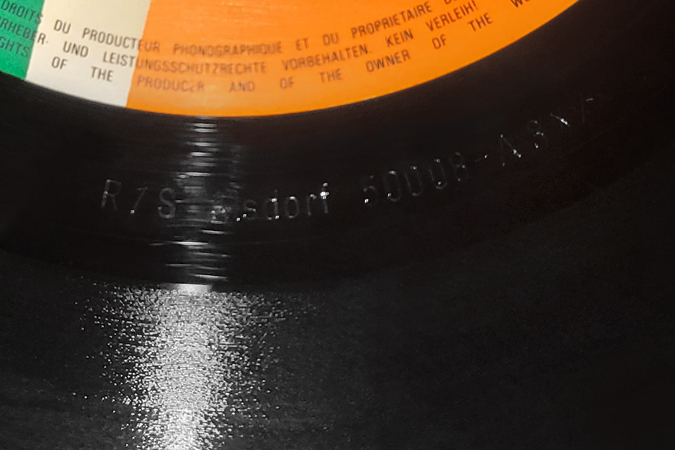 Lead-out groove on a German pressing of Led Zeppelin III

Occasionally, I had no choice but to use the engravings in the dead wax on the vinyl itself. When the entry was some sort of dime-a-dozen record like Genesis’ Duke ($8 for pretty much any version), I didn’t bother. Instead I just clicked Add to Collection and moved on. But some jazz pressings are a bit more involved. So I’d take a close-up photo of the lead-out groove with my phone, holding it at an angle to catch the light, and then enlarge it so I could read the inscription. Then I could either type it into the search bar on Discogs and—most times—it’d come up with the right pressing, or I could check the Notes section for suspect releases. A little extra attention could mean the difference between discovering you own a $100 original or a $15 repress.

Once I got into the swing of things, I found that the process of cataloging my collection in Discogs became somewhat addictive. In general, it took me about 20 minutes to process a linear foot of records. It became rather exciting, and the split second between my finishing entering the release and Discogs bringing up the value was gravid with suspense. And when I got a cool surprise—anything over $100 qualified here—it was like a tiny dopamine hit. Sort of like hitting the jackpot on the slots in Las Vegas. 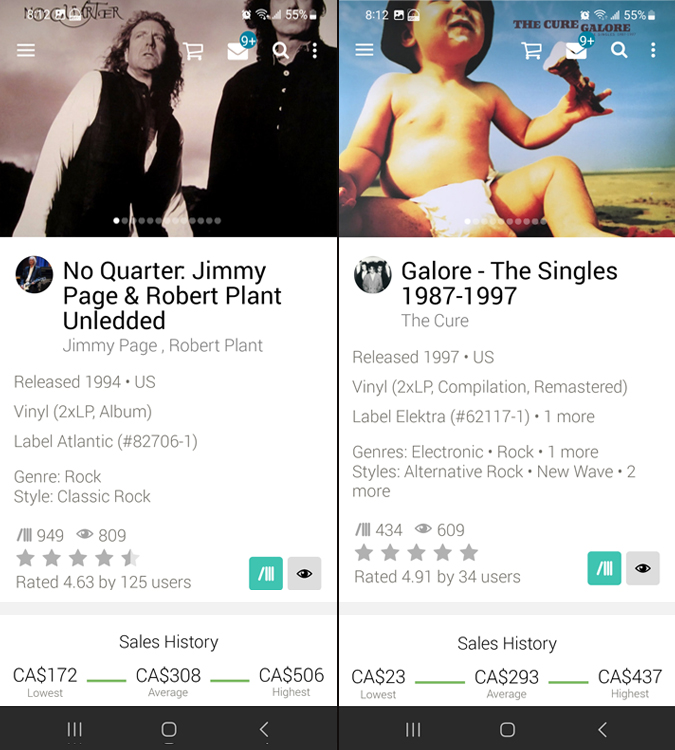 There were a few really juicy surprises that I just did not expect. At the top end of the spectrum were my two most expensive records: The Cure’s Galore: The Singles 1987–1997 (Electra 62117-1), which rang in at an average value of $293, and No Quarter: Jimmy Page and Robert Plant Unledded (Atlantic 82706-1), which Discogs pegged at a value of $308! I honestly had no idea either of these records would be worth much more than $30 at the top end of the scale. 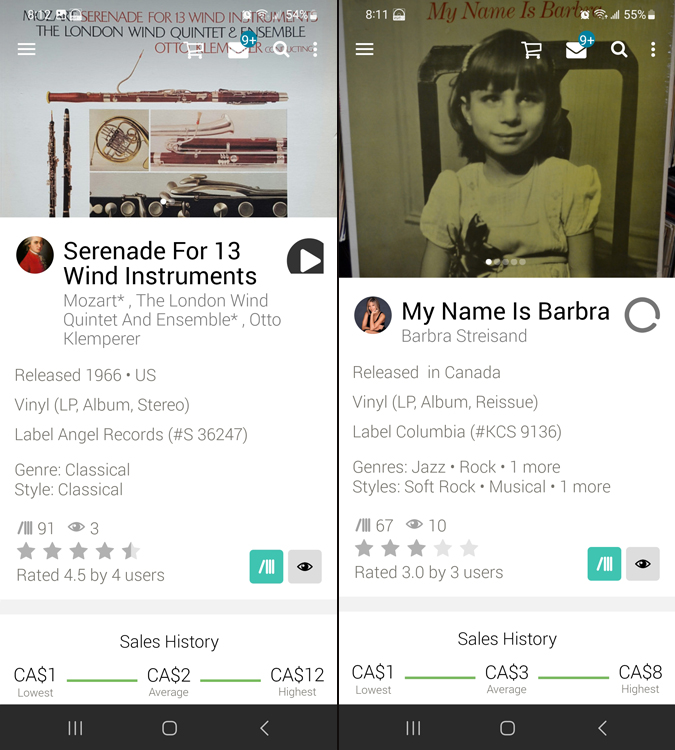 At the other end of the value pile were records worth only a couple of bucks—stuff I’d picked up at garage sales for reasons that escape me, or stuff my mom’s friends had dumped off when they heard I was “into records.”

To date, I’ve entered about half of my collection. I did all the records in the frequent-listen pile against the wall and those leaning against my equipment rack. I did the entire jazz shelf because these records are a fussy pain in the ass, and I didn’t think Toni would have the patience to wade through all of the label, year, and country options. I also processed the three classical cubes, noting with confusion the wide range of prices—many of them were four bucks each, but some were well over a hundo, with no pattern that I could recognize. 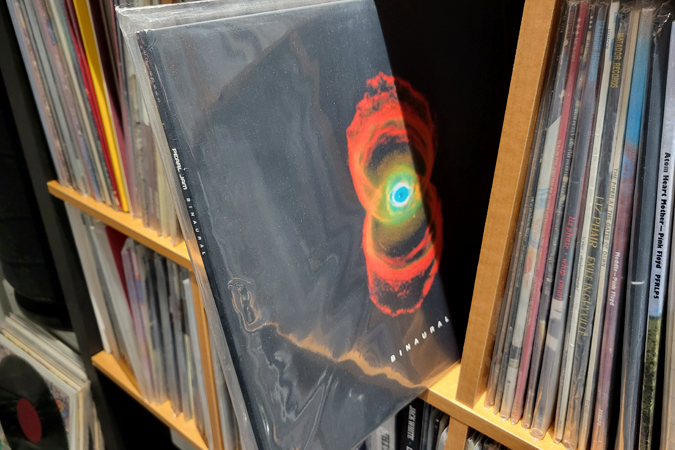 I finished all the way through M and started into the P rock cubes. The big surprises here were a couple of ’90s Pearl Jam and Nirvana albums that topped $200. I guess there’s good money in original grunge records. I’m going to leave the rest for Toni to enter into Discogs, to see if she’ll get back to this, as it’s been nearly three weeks since she ran through the first two cubes.

All well and good, these prices, but I’m not really planning to sell any of them, although I have given a bit of thought to the idea, especially in relation to some of the hella expensive titles I’ve only listened to once and likely won’t listen to again. But it’s work, and really—I’d probably only buy more records, so what’s the real point?

I’ve been mulling over the whole value concept since I started this endeavor. Discogs reports three values for a release: Lowest, Average, and Highest. Lowest and Highest are self-explanatory, but it’s the Average value that seems like the most useful metric by far. According to Discogs, the Average value is calculated using the selling price of the last ten actual sales, and since Discogs is, by its very operating principle, a marketplace for people to buy and sell records, they do actually have these sales figures. So I think it’s safe to say their Average price, averaged across my entire collection, is at least somewhat accurate. 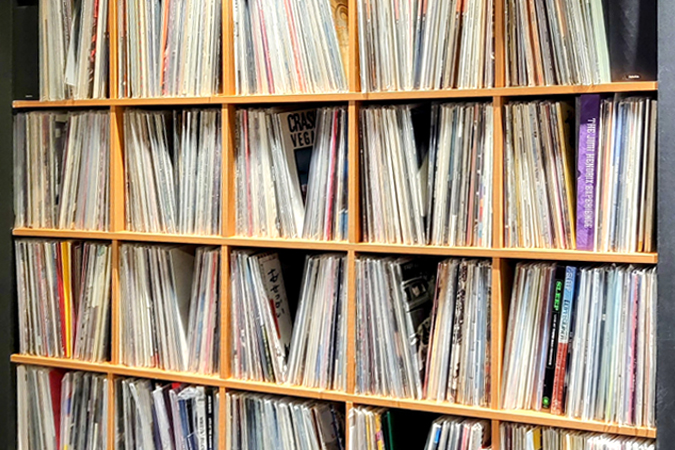 And holy hell—these things are worth a heck of a lot of money! With only half my collection entered, I’m sitting on nearly $30,000 in records! But what, I ask, does this really mean? I suppose it means that if I took a couple months off my day job, I could list all these records on Discogs, buy a ton of cardboard mailers, and become a record seller. But then I would no longer be a record collector, so that’s not going to happen. I suppose I could also root through the most valuable records in my rack, pick the ones I no longer listen to, and convert them to cash. But it’s a lot of work, I can’t afford the time, and I don’t really need the cash, so that’s not gonna happen either.

But entering my collection in Discogs has other benefits. The first and most tangible is that I know how much it’s all worth for insurance purposes. My record rack is in the basement, and I’ve always been nervous about floods. We’ve had a few small leaks down there, but nothing severe enough to damage my records. You never know, though, and for an inveterate worrywart, knowing it’s all cataloged engenders some valuable peace of mind.

Another plus to all of this work is knowing exactly which records I own. I always get Talk Talk’s Spirit of Eden and Laughing Stock mixed up, and I now know which title I still need to find a reissue for. Now that I can access this info on my phone, I won’t end up buying a duplicate or turning down an opportunity to buy something I don’t own because I just can’t remember if I already have it.

And then there’s little Toni, who I sometimes think is sizing me up out of the corner of her eye, like a leopard waiting for the sick buffalo to drop to its knees. At least she won’t get taken for a ride when she starts liquidating my records.