Amelia Da Costa Stone was born in Gainesville, Florida, on July 15, 1919. At 16, her interest in languages and international relations took her to Paris, to study at the Sorbonne. After majoring in history and international law, she returned to the States and Washington, DC, to work for the US State Department as editor and director of publications for the Interdepartmental Committee for Cultural and Scientific Cooperation.

In 1942, Amelia married J. Douglas Haygood, a clinical psychologist, and her interest and skill as a therapist soon emerged. She pursued graduate studies in medicine and clinical psychology, and eventually she and her husband established a joint practice in Beverly Hills, California. After his death, in 1956, and the subsequent loss of a close friend through a long terminal illness, Amelia Haygood decided to go in a different direction. Her lifelong passion and interest in music, performers, recordings, and high-fidelity sound, as well as her graduate studies in psychoacoustics and the physics of music, helped shape her new trajectory.

Haygood had close links with many American concert artists and ensembles. Disenchanted with the lack of recording, promotional, and marketing opportunities available to them, she decided that she wanted to provide an international platform for them. In 1971-72, working from home and using her $150,000 savings account, Haygood began to establish a new record label, with herself as founder and president, and in 1973, Delos Records released its first LP.

Haygood named her new company for the birthplace of Apollo, the sun god who brought music and healing to the world -- elements that she had always felt to be intimately connected with each other and with her own spirituality. As she wrote then, “Greek mythology tells us that Apollo set out from the island of Delos every morning with his lyre in hand, bringing light, music and healing to the world. We at Delos share the awareness that our world needs the balm of music.”

Delos quickly became known as an outlet for American musicians and ensembles, something Haygood had aimed to create from the label’s inception. “The only artists getting heard were European,” she told Forbes in 1995. “I thought cultural exchange should be a two-way street.” Interestingly enough, this was also the opinion of the executives of two other fledgling American Labels, Reference Recordings and Telarc. They and Delos secured niches in the fierce global marketplace primarily because the outstanding technical quality of their products fascinated audiophiles.

Over the years, Delos received rave reviews for its productions. Peter Davis of the New York Times described the company as being one of few “small classical labels, the industry’s rugged individualists.” Gramophone saw Delos as “a label with a strong personality . . . a host of major performers . . . plaudits for its technical excellence.” New York Magazine wrote, “Some of the most consistently satisfying CD sound comes from independent labels such as Delos, which watch over the production of their discs like anxious mothers.”

Until the closing months of a 12-year battle with cancer, Amelia S. Haygood was the executive producer of every Delos commercial project. She maintained artistic and quality control through the complex stages of album conceptualization, recording, postproduction, manufacture, and packaging. She insisted on standard-setting quality in artistic excellence, integration of new technology, innovative presentation, and minute attention to every detail of production. Her vast experience of communicating with people from all walks of life and cultural backgrounds gave Delos a unique perspective and direction. Amelia Haygood died peacefully at her home in Santa Monica, California, on March 19, 2007, at the age of 87.

Sanch and Delos -- 29 years of serendipity 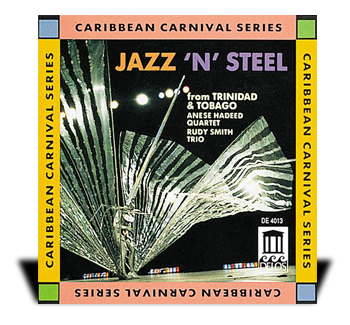 Sanch Electronix Limited, my audiophile music- and equipment-distribution company in Trinidad and Tobago, has enjoyed a mutually beneficial business relationship with Delos since 1984, when we began distributing their CDs in Trinidad and Tobago to supplement the sales of audio hardware we imported from Europe, the US, and Japan. In 1987, Amelia Haygood offered Sanch a contract “to put some of your recordings on my label.” To this day, I have yet to come to terms with the union of a highly eclectic classical label with steelband and calypso music! However, this purely serendipitous gesture has proved eminently successful for both parties.

Sanch’s best period of growth with Delos was between 1990 and 1991, when Delos’s products were distributed by A&M Records. The first major review was for Jazz ’n’ Steel from Trinidad & Tobago (Delos DE 4013), featuring a combination of steelpan and conventional instruments -- piano, bass, drums -- in an intimate jazz setting. The review was published in the January 1990 issue of Stereo Review. The critic said, “The resulting sound is interesting and at times quite engaging.” 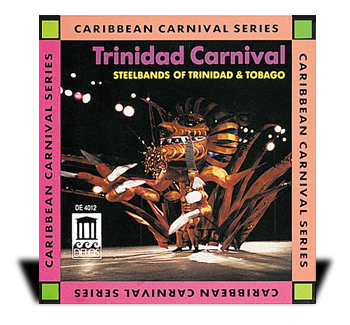 The Sanch-Delos alliance resulted in production of 14 CDs under the aegis of the Caribbean Carnival Series, which spanned eight years. It was inaugurated with Steelbands of Trinidad & Tobago, the world’s first CD of authentic pan music. In 1995 the Sanch label was formed, mainly because of the faster pace at which we were generating production masters. To date Sanch has produced over 120 single and dual CDs for private clients and for the label. We have used Professor Keith O. Johnson’s proprietary HDCD technology since 1997.

For a number of years I made biannual trips to the Delos facility in Los Angeles, where I gained detailed insight into the production and marketing of CDs that would serve me in good stead when I formed the Sanch label. Unfortunately, I never met Delos’s director of recording, John Morgan Eargle (1931-2007), who was not only an audio engineer but a musician with perfect pitch, a Fellow of the Acoustical Society of America, a winner of Oscar and Grammy awards, and the author of numerous seminal textbooks and publications.

Eargle recorded soloists such as John Browning, Arleen Augér, János Starker, Garrick Ohlsson, Carol Rosenberger, and Bella Davidovich. At the Grammy Awards in February 2001, he won for Best Engineered Album, Classical, for his Delos recording of Dvořák’s Requiem and Symphony No.9, performed by the New Jersey Symphony Orchestra conducted by Zdenek Macal. 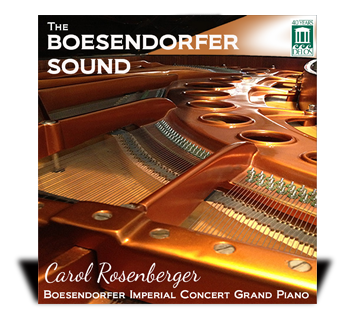 During one of my visits to Los Angeles, Amelia Haygood invited me to her home for tea. That afternoon, concert pianist Carol Rosenberger, a Delos recording artist and the label’s new director of A&R, played a few selections on her famous Bösendorfer Imperial Concert Grand, affectionately known as “Bösie.”

Since the deaths of Haygood and Eargle in 2007, Rosenberger’s portfolio has grown; she is now Delos’s director and executive producer. (American pianist and conductor Constantine Orbelian is the label’s international director of A&R.) The Delos home office is now located in Sonoma, California. The large classical distributor Naxos now distributes the Delos catalog worldwide, except in territories where Delos has had a long relationship with a local distributor, such as Trinidad and Tobago, Hong Kong, Taiwan, and Japan.

Rosenberger explained her thinking behind the release of 40 for 40, a set of three CDs (for the price of one) to celebrate Delos’s 40th anniversary:

“To celebrate Delos’s 40-year milestone, how does one represent, in 40 tracks, a catalogue four decades in the making? In my view, by allowing each track to stand for a series, an artist or artist group, or a cluster of titles that have vital elements in common. And how does one present 40 relatively short and disparate tracks in listenable form? An answer to that question formed itself as three programs-within-a-program, each shaped as a complete listening experience.

“CD1 luxuriates in the symphonic facet of Delos; CD2 relishes the operatic and vocal; CD3 spotlights the virtuoso soloist or chamber group, along with some stunning choral work.

“The entire 40 for 40 program contains lively, jubilant music appropriate for a celebration and traverses a vast emotional landscape, all the way to the kind of music that ‘goes straight to the tear ducts,’ as Amelia used to say. Great music offers a rich variety of internal experiences, and we aim to offer the listener a comparable range. No matter how many times I have listened to these tracks -- or even what kinds of production work I may have done toward their development -- every one has its visceral or emotional effect with each hearing. And yes, there are those that ‘go straight to the tear ducts’ every time.” 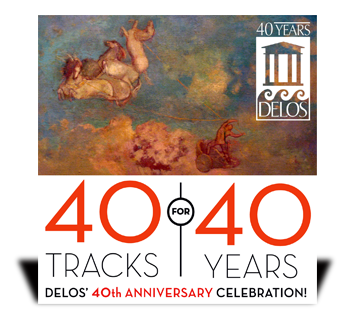 I resigned from the Trinidad and Tobago Bureau of Standards in 1979 to embark on a career of entrepreneurship “in the wilderness” with my company, Sanch Electronix. After 35 years in the business, I am proud to have been associated with small independent audiophile labels such as Proprius, Reference Recordings, Delos, Mobile Fidelity Sound Lab, Chesky Records, First Impression Music, Opus 3, and Telarc.

A few of them have survived the rigors of chapter 11 bankruptcy to rebound from catastrophic failure with renewed energy solely because of the belief, creativity, and tremendous personal sacrifices made by their visionaries. Delos Music is one such example.