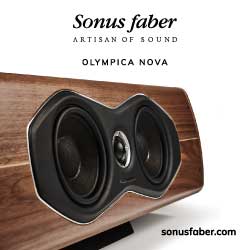 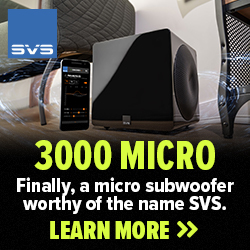 Estelon: Substance to Match the Style

This is intended as a companion piece to the review of Estelon’s X Diamond Mk II loudspeakers.

Estelon is unusual. The Estonia-based company is unusual for a variety of reasons, actually. Consider the company’s loudspeaker creations, which echo its silhouetted logo, to see what I mean. They’re elegant, feminine, fashion-forward. These are not words that you would ascribe to the far majority of loudspeakers on sale today. The depressing truth is that so many brands in the high end couldn’t market their way out of a khaki factory. One need only attend a regional audio show to see this in action—or maybe inaction? Cultivating a brand, a lifestyle—this requires a variety of skillsets and a dedication to execution, and that’s before you get to the product itself. Too many companies are myopic, with the Field of Dreams-esque “If you build it, he will come” attitude that the sound or performance envelope alone of a product should see consumers clamoring to lay down their hard-earned cash. That’s not how business works. And that’s not how this business works. 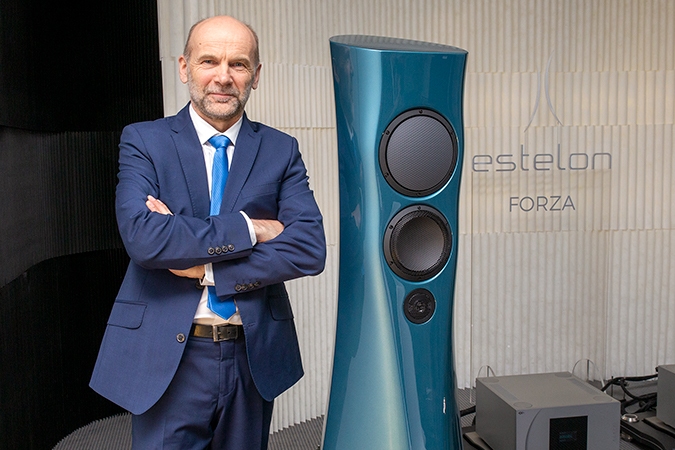 This story begins in a most unlikely setting: St. Petersburg, Russia. Alfred Vassilkov was born in the middle of Nikita Khrushchev’s reign over the then Soviet Union. The leader assumed power in 1953 following the death of Joseph Stalin, and he relaxed some of his predecessor’s more brutal and paranoid policies. Under what became known as the Khrushchev Thaw, the Soviet Union became less repressive and more liberal, encouraging cultural development. Somewhat fittingly, Alfred’s family was big into music. His father was an accomplished accordionist, and his aunt played both the accordion and the piano. Young Alfred enjoyed listening to the radio with his father. “These were the radios with big ears that you need to adjust,” he told me. “I had interest in seeing how it’s playing.” So, as young boys are wont to do, he wound up breaking his father’s radio and multiple others to see how they worked. “I saw that they’re mostly the same, but they sound very different [from one another]. Why?” This eventually led Alfred to build loudspeakers in his family’s garage as a teenager. “I started to look for information about sound, but I found very few books.”

I met Alfred several years ago at Munich’s High End show in the before times, when social distancing was only en vogue for introverts. There was no mistaking his eastern European roots, with his open complexion and penetrating gaze. His seriousness was self-evident. “I started to look into a professional path—mathematics or physics? My second choice was design,” Alfred said. He attended the Saint Petersburg Electrotechnical University, earning a degree in electroacoustics and ultrasound. Shortly thereafter, he was offered an R&D position with an Estonian electronics manufacturer called Raadio-Elektroonika Tehas, or Radio Factory RET. “I was very happy; we were making high-end radios, loudspeakers, and electronics,” he said. Estonia gained independence from the Soviet Union in 1991, and the factory closed in 1993, at which point Alfred founded his own company, a laboratory for loudspeaker design. “The [Eastern bloc] market opened up to the world, with different customer needs and desires,” he explained. “In 1999, we started to go to Las Vegas, and we had the possibility to participate in the biggest show in the world [The Consumer Electronics Show].” Between his time at Radio Factory RET and consulting through his own laboratory, Alfred designed over 100 different loudspeakers by the late 2000s. “[They had all] different principles, different approaches. I learned of new companies abroad and key suppliers,” he said. 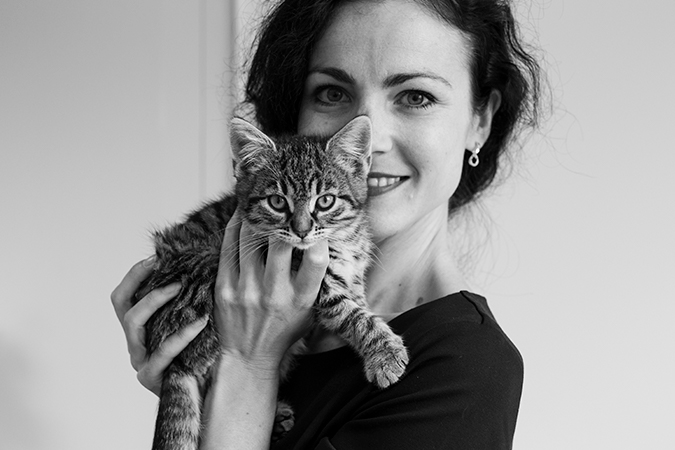 In the traditional hi-fi narrative, this is where Alfred would have staked out on his own, followed his passion, and started a loudspeaker firm. Instead, we meet Alissa Vassilkova, Alfred’s daughter. In contrast to her quieter, metered father, Alissa is more forward and confident. “I grew up in this environment where there were speakers or equipment at home that Alfred was working on. [Like my father] I also broke radios! For years I had the restriction at home to not touch any equipment—with their dials and knobs,” Alissa told me. “I did ballroom dancing for many, many years. It was demanding, but I really loved the music,” she said when I asked what her passions were growing up.

“I studied business administration, and I did my thesis on the loudspeaker industry,” Alissa said. When I asked if she had always wanted to be involved in this high-end audio industry, she paused thoughtfully. “I knew I wanted to have my own business, my own company. . . . During university [at the Tallinn University of Technology], I started to work at the university’s Center for Executive Education [in Tallinn, Estonia’s capital]. I could work with top Estonian companies to develop training programs for their managers and learn what problems they have. We had the best professors and consultants at hand. It was extremely interesting.” It was abundantly clear to me how sharp, insightful, and polished Alissa is. It’s no surprise that Alissa went on to lead the Center only three years after beginning to work there.

For several years by this point, Alfred had been toying with loudspeaker designs in his basement, trying “many experiments with different ideas.” Inspiration struck during a Sunday morning breakfast in April 2010. Alfred presented the family, including Alissa and her sister, Kristiina, a prototype loudspeaker and a rough business plan. “We all looked at it, and it felt right. It was a brilliant idea, and Alfred was so passionate about it,” Alissa explained. “I was extremely happy that this business idea came from my father.” Alfred, Alissa, and Kristiina registered the company the very next day. 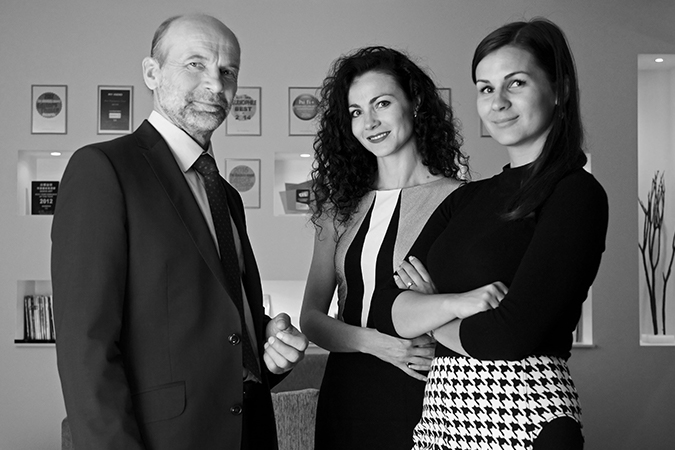 A couple of things were clear from the outset. Alissa would be chief executive, but would remain in her leadership role at the Center for Executive Education, where she’d worked for three years by this point. Kristiina would serve as a partner, using her background in finance to identify outside investment. And Alfred would set both the design and engineering philosophy. “Our idea was to get to the top,” Alfred told me. “Even though the technical parameters guide the designs, we liked a clean, minimalist, Nordic look,” he said. In other words, form followed—and continues to follow—function at Estelon, not the other way around. Alfred had a product portfolio in mind from the beginning, but execution and scaling took time. “I worked nights and weekends, had no spare time, no holidays,” Alissa said. “I was still organizing management conferences and helping with television shows [at the Center for Executive Management].” These were the difficult times, Alissa told me, where every dollar earned was being reinvested right back into product development. By 2014, however, Alissa quit her job at her alma mater and dedicated herself to managing Estelon full-time.

What is Estelon’s differentiator? “From the beginning, I knew our speakers needed to be elemental to the interior of a home,” Alfred said. “They needed to be in harmony with the home, with high-quality sound, but also beautiful. [You should want to] put it in your room, not hide it in the corner.” His experience in interior design and installation work was formative in this respect. And so Estelon’s cabinet shape has become something of a signature. Ally that with a proprietary marble composite cabinet material and some of the finest drivers money can buy—primarily from German manufacturer Accuton—and, as Jeff Fritz discovered in the companion review of the X Diamond Mk II, the results speak, or perhaps sing, for themselves. 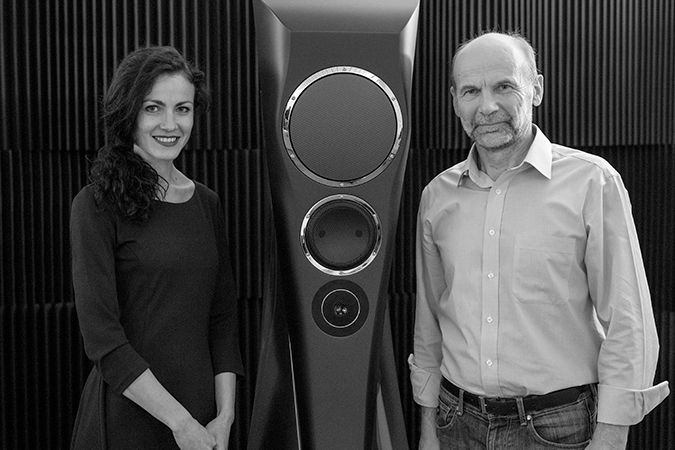 Estelon’s success—2020 was its best year—is entirely down to the contributions of Alfred and his two daughters. Clichéd as it may be, their creations really are greater than the sum of their parts—and owners. Alissa has the business acumen and skillsets to be working as a management consultant or at some publicly traded corporation. She is as demanding in her leadership role as Alfred is in his technical role. “We have ten people [on staff] and are hopefully growing soon,” she said. “It has been very challenging to find people who can execute.” And that, that right there, is all you need to know. Because when that is the off-the-cuff reaction of a CEO whose company is coming off its best year, and whose products are every bit as polished and complete as its marketing materials—and its marketing is exceptional—it’s encouraging to hear that she’s still not happy. In hi-fi, as in life, there is always more to learn, higher to climb.

Wrapping up my transatlantic conversation with the father-daughter tandem, I asked Alissa her thoughts on the industry, given that our cohort, the millennials, holds such dramatically different attitudes toward music consumption than prior generations. “Five years ago, I would have been afraid that the market is shrinking,” she said. “But the market is still growing! The key point is that the product be user friendly. And another thing is the design. Design should be present, different, attractive. We see many examples where the whole house is Bose, but in the living room is a luxury system with Estelon.” 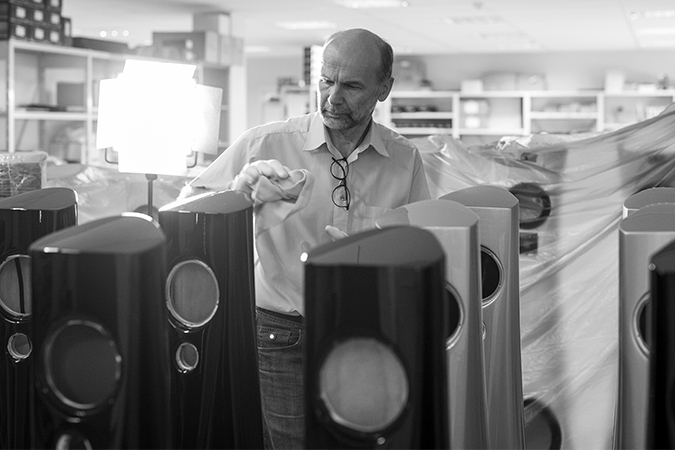 So who is buying Estelon loudspeakers? According to Alissa, “80 to 85 percent of buyers are music lovers. It’s a good investment of time and money, especially for young families where children are growing and listening to good music from the beginning.” Just like Alfred in 1950s St. Petersburg.