This profile of Perlisten CEO Dan Roemer is intended as a precursor to the review of Perlisten’s R7t loudspeaker, which will be published on July 15.

Nothing happens quickly in the high end. Our nook of the audio industry is so cloistered and remote that changes are always incremental. Most new companies that crawl out of the primordial ooze tend to be works in progress, with products—and often just a singular product—that aren’t finalized and nascent dealer and distribution networks. They frequently project one-man-band vibes that do little to instill consumer confidence. Given the time and investment necessary to start a company, let alone ship a mature, fully formed product with genuine post-purchase support, it’s not difficult to see why this is the case. Perlisten Audio—pronounced per-listen, not per-list-en—is highly unusual in this regard. In fact, it’s highly unusual in many regards. Perlisten is likely the most impressive hi-fi debutant to arrive on the scene since Devialet splashed its way into the high end a decade ago. 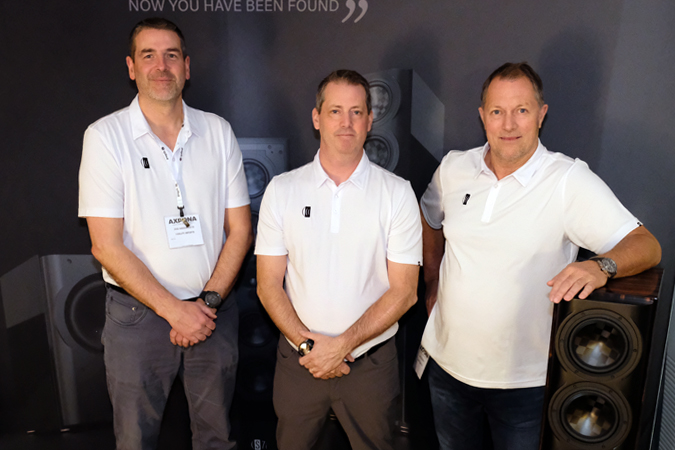 Perlisten CEO and co-founder Dan Roemer is not your typical hi-fi figurehead. If you attend enough audio shows, these guys tend to land in one of a few buckets. You have your hardcore engineers who know only the engineering side of things that decide to stake out their own territory even though they lack the charisma and other core skills necessary to build a successful business. Then there are the natural salesmen, the affable front men with their easy smiles, who try to convince you that their speakers or amplifiers will fundamentally alter your worldview while masking the profound lack of substance in the wares that they hawk. Occasionally you’ll encounter a seasoned industry veteran who appears to have all the right stuff—engineering chops, an eye for detail, supply chain knowledge, and the requisite investment—but even that is no guarantee for success if they’re turning up with only one or two products. When you meet people like this, you’re often left wondering, “How long will these guys be around?”

Roemer’s backstory is common enough. This 50-something caught the audio bug in his teens, partly through hi-fi, but mostly via car audio. He reminisces about building out the sound system of his vintage VW Scirocco. “It was orange-ish, really cool,” he says. “I redid that thing like three times and also did a couple of [Toyota] Celicas.”

Dan would go on to study electrical and computer engineering under Professor Richard Greiner—“Doc,” as he was affectionately known—at the University of Wisconsin-Madison. The course of study was a neat fit for Roemer’s future in audio, as Greiner was not only an academic and an engineer but also an audiophile. So, there was dedicated coursework on amplifier design and lessons on transducer design that introduced the concept of gated measurements. There was even a unit on CDs, which were cutting-edge technology at the time. “There are a lot of guys out there that studied under Doc who are now working in the hi-fi industry,” Roemer told me. 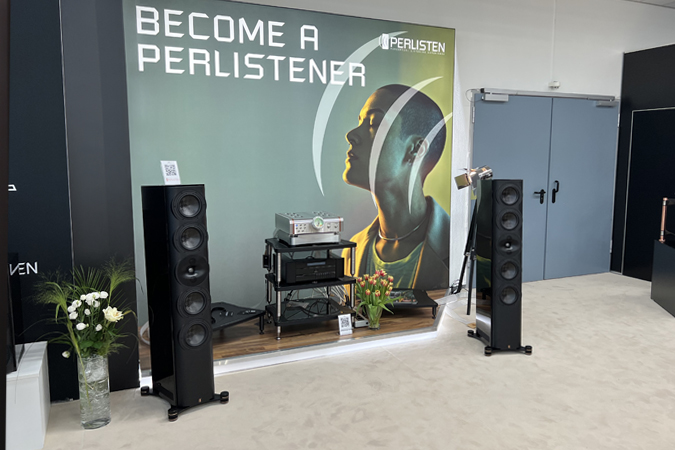 Fresh out of university, Roemer began his career at International Jenson in Chicago, Illinois. Starting out in the corporate technology group, he became heavily involved in research focused on finite element analysis, suspension, cones, surrounds, magnetics, and tying simulations back to real-world designs. In the mid-’90s, this was cutting-edge stuff. “A lot of smart guys taught me a lot of cool things,” he remarked. “We were servicing products from NHT Audio and Advent, but also automotive stuff for Ford F-series trucks and the Taurus. The big takeaway for me was that this company had tons of engineering talent on tap, but it didn’t care about audio.” A proverbial bean counter was in charge, Roemer told me. “That stuck with me.”

From there, he moved on to MiTek Corporation, a company that handled a good deal of car audio, as well as custom and OEM acoustic work. At MiTek, Roemer worked on plenty of consumer-grade audio projects and applications, in addition to designing speakers for the International Space Station, tanks, and aircraft, along with more mundane products like PA loudspeakers. After several years as vice president of acoustic products for MiTek, he found he had “tapped out” of products that appealed to him and decided to go the consulting route in 2008.

In his consulting work, Roemer began to supplement his decade-plus of engineering and product experience with the knowledge and skills that would allow him to create Perlisten years later. “On the consulting side, you need to be a jack of all trades, from CAD development to industrial design.” He explained that he didn’t have the luxury of being an opinionated jerk—Roemer was rather more colorful in the way he phrased this—as he was ultimately beholden to the companies that paid his invoices. “The diversity was really cool; [it forced] me to be creative about how I went about meeting the customer’s requirements for a given product. I didn’t have the luxury of following trends in the market.” Along the way, he met a lot of fantastic engineers in the United States, Canada, and Mexico, as well as the Far East, Indonesia, Malaysia, and other places. He speaks passionately and maturely about what a formative experience his consulting work proved to be prior to building his own outfit from scratch. 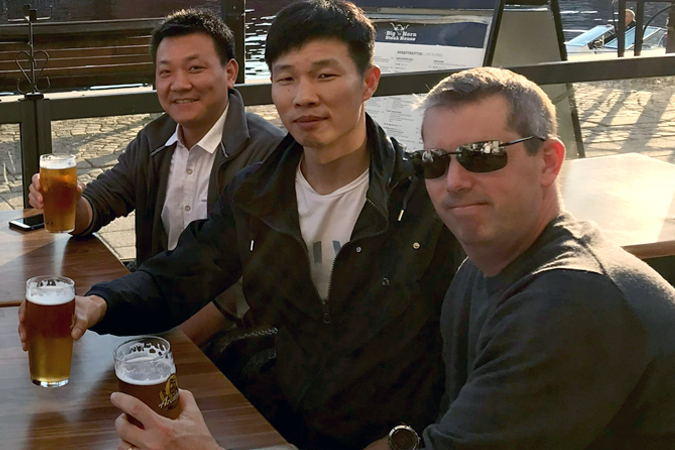 “If you’re going to do your own thing, you need to partner with a factory because you have limited resources.” He found his partner in the form of Peter Yang, an old friend who had opened a factory in Dongguan, a city in China’s Pearl River Delta. Crucially, and around the same time, Roemer created a company called D-Acoustic, which included several engineers who did electrical, software, transducer, FEA, and multiphysics work. These two factors allowed the idea of Perlisten to lay roots in April 2016, as Roemer and company were able to begin running their own projects in parallel with the consulting work they did through D-Acoustic that was paying everyone’s salaries. Roemer knew that in order to be taken seriously, he had to come to market fully baked, with proprietary differentiators, full infrastructure and support, and a complete product line that was available from the outset. It took several years of research and development before Perlisten’s creations were fully formed, but in 2020, early in the COVID-19 pandemic, Perlisten Audio went live with a five-SKU-deep S Series—in addition to a line of subwoofers—that, even two years later, looks deeply impressive. Recently, Perlisten formally announced their more affordable R Series.

Consistency is a priority for Dan Roemer. I asked whether he’d had a target frequency response curve in mind when he and the Perlisten team began designing the S Series, such as the well-regarded Harman curve. The answer was “not really.” Rather, with his battery of experience to draw on, Roemer knew he wanted his creations to share an identical tonality. “A family of curves,” as he described it, “That is what’s most important to me.” 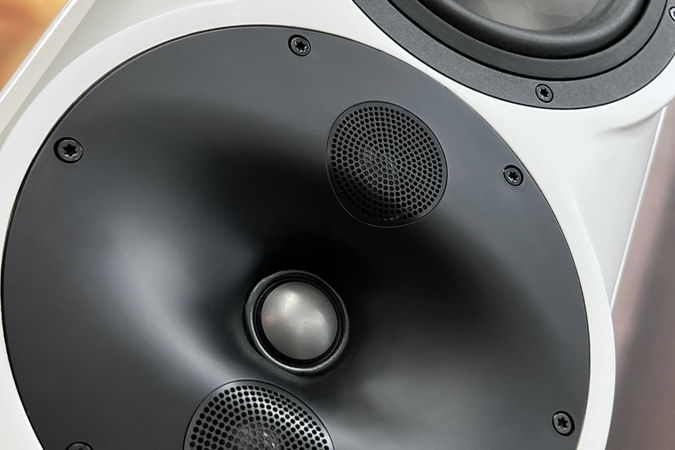 The entire lineup features something Perlisten calls a DPC array: a three-dome MTM configuration that includes a tweeter flanked above and below by similarly sized midrange domes. Roemer notes that this approach has borne significant fruit: “Those three transducers combine down to about 1100Hz (-10dB). Distortion is through the basement compared to a traditional tweeter-midrange arrangement, as there’s only half a gram of moving mass. This opens up the midrange in ways we didn’t know were possible until we started doing our own prototyping.” This unusual approach to midrange reproduction yields additional benefits in the form of decreased thermal compression, better pattern control, and increased sensitivity.

Perlisten’s other differentiator is that its products are THX Dominus certified, and in fact, they were the first loudspeakers on the market to achieve this designation. The standard was announced in early 2016 and is THX’s most demanding, with certified loudspeakers capable of withstanding 120dB sound pressure levels and boasting sensitivities of at least 92dB. For Perlisten the logic of pursuing THX Dominus was self-evident: It was about credibility. Here’s a new brand, making a lot of big claims about sound quality and engineering excellence—any remotely seasoned industry veteran has heard these claims before and knows to take them with a sizable grain of salt. “We needed to show the data on the website. We did Dominus because no one else had done it,” Roemer said matter-of-factly. According to Roemer, it’s not about the marketing angle—though that certainly doesn’t hurt. It’s about demonstrating competence. 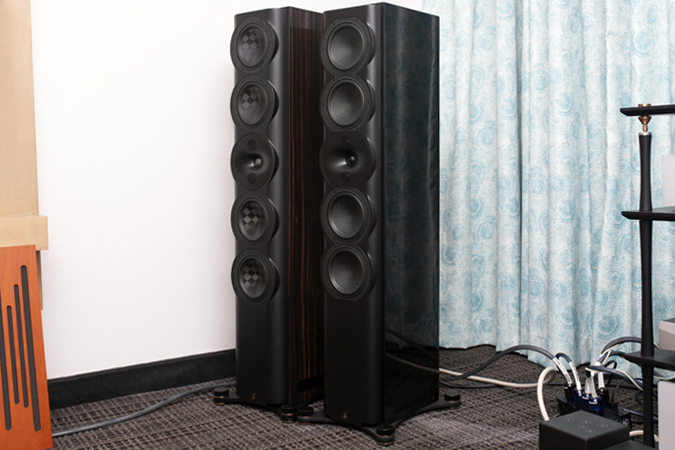 Combine all this with the drivers and crossovers that Perlisten both designs and manufactures, and rapidly growing international support. Perlisten is going to be selling speakers in Germany “in a big way,” according to Roemer, and the company has facilities in Denmark and India. All this makes for a narrative that’s difficult to fault. It helps that Roemer is a no-BS operator and his enthusiasm for offering products with solid engineering and exceptionally high performance that are not obnoxiously expensive is laudable; his flagship S7t tower speaker, a four-way design, retails for $17,990 per pair in the US. While not exactly a pittance, it’s a far cry from what you’d normally expect to see from a relatively boutique brand. The thing is, calling Perlisten a boutique is probably unfair. As of late March 2022, they were already distributed in 32 countries. “We just added Pakistan today!” Roemer happily reported.

The truth, as ever, is in the listening. So, do read my review of the R Series flagship, the R7t tower, to see my thoughts on the Perlisten’s sonic qualities. As a brand, though, I have to say that Perlisten is one of the most impressive hi-fi debutants I’ve seen in a long time. It wouldn’t surprise me if we were talking about Dan Roemer’s first-generation creations a decade or more from now.