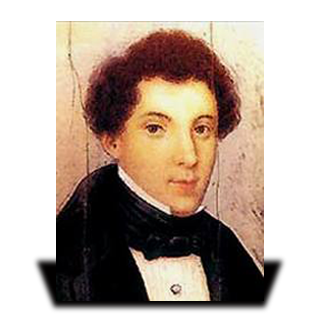 Last summer the mail-order Musical Heritage Society added to its catalog the Chilingirian Quartet’s recording, originally issued on LP by ASV in 1975, of the three string quartets of Juan Crisóstomo Antonio de Arriaga y Balzola, who will never be among the top 100 composers of all time, perhaps, but whose music is nonetheless very much worth getting to know. When you do get to know it, and get to know a bit about Arriaga himself, you will find some of those little coincidences which actually mean little but are nevertheless intriguing and can hardly fail to be noticed, mentioned, and remembered.

Arriaga, who came to be known as "the Spanish Mozart," was born in Bilbao on January 27, 1806, the 50th anniversary of the actual Mozart’s birth. As in Mozart’s case, Arriaga’s father was a respected musician. Leopold Mozart was a respected violinist and composer, whose violin method is still in circulation today. Arriaga’s father, an organist, was not unmindful of the significance of his son’s birthdate: the name he gave the boy begins with the Spanish equivalent -- Juan Crisóstomo -- of the beginning of Mozart’s full baptismal name, Joannes Chrysostomus Wolfgangus Theophilus Mozart. Both composers had short lives: Mozart died seven and a half weeks shy of his 36th birthday; Arriaga died ten days before his 20th. But the reason Arriaga became known as "the Spanish Mozart" has less to do with names and dates, and rather more with both composers’ having demonstrated their remarkable gifts before getting into their teens, and consistently producing music of both charm and substance.

Like Mozart, Arriaga composed music of substance and in various forms before he was 12 years old. At 15, by which time he had composed his opera Los esclavos felices ("The Happy Slaves"), he was sent to the Paris Conservatoire, where he studied counterpoint and fugue with the famous François-Joseph Fétis, who was then completing his textbook on those subjects -- and who declared that in just three months Arriaga had demonstrated "a perfect knowledge of harmony." The young composer had produced his first work for string quartet, a set of variations, before leaving Bilbao; in Paris he completed three four-movement quartets before reaching age 16, and these, as we came to know only about 60 years ago, may be regarded as being on the same level as music composed by Mozart and Mendelssohn at the same age.

Many of us first encountered Arriaga’s name in the early 1950s, when the Guilet Quartet recorded all three quartets on LP for the earliest serious producer of mail-order LPs, David Josefowitz’s Concert Hall Society. That recording of the Third Quartet had a rather limited circulation, for subscribers only, but the disc of Nos. 1 and 2 was eventually offered in stores, and may be regarded without exaggeration as one of the earliest "classics" of the LP catalog, giving notice, as it were, of the discoveries and rediscoveries to be offered to a receptive musical public as the new format established itself as the accepted replacement for 78s. It helped, of course, that the Guilet Quartet was a first-rate ensemble, admired for its vigor, balance and overall elegance as well as its adventurousness in acquainting us with Arriaga. (Daniel Guilet, the Quartet’s leader, was concertmaster of Toscanini’s NBC Symphony Orchestra in its last years, and in that orchestra’s subsequent and short-lived existence as the "Symphony of the Air.") 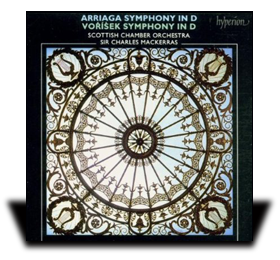 An earlier recording of No.1 and the minuet of No.2, played by the Spanish National Quartet, circulated on 78s, but only in Spain; the Guilet LP became a collector’s item, and was reissued more than once on different labels. It remained, in fact, the only recording of those two quartets known in our hemisphere, or much of the rest of the world, until 1965, when the short-lived Golden Crest label brought out a two-LP set of all three quartets plus the Theme and Variations, performed by the Phoenix Quartet. That set was welcomed for its inclusiveness, but did not displace the special status earned by the Guilets.

Over the years since then we have had recordings of some of Arriaga’s other works: the Symphony in D major, the Overture to Los esclavos felices, a Nonet. All of these are also very attractive (the Symphony especially so in the splendid recordings conducted by Jordi Savall, on Astrée, and under the late Sir Charles Mackerras, on a Hyperion CD), but it is the quartets that represent this composer at his very best, in respect to inspiration, craftsmanship, and even originality (for all the quite understandable influence of Mozart and Haydn).

Listeners expecting the sort of "Spanish music" we have come to know -- as much from the examples provided by Ravel, Chabrier and Glinka as from those of Albéniz, Falla and Turina -- may be disappointed. While a specifically Spanish flavor does make itself felt here and there -- an example is the minuet in No.1, whose trio has been described as a jota -- there is much more to demonstrate the productive influence of Mozart and Haydn, and to suggest Schubert as a companionable spirit. And why not? After all, Arriaga, despite the difference in their ages, was composing in the same years as Schubert and the still older Beethoven.

By now there have been perhaps a dozen "integral" recordings of Arriaga’s three quartets, including nine or ten on CD. The one "celebrity-class" performing ensemble to record them was the Guarneri Quartet, whose Philips CD was issued in 1997, and now has itself become such a collector’s item that Amazon.com lists an unused copy at $297.74, and used ones "starting at $50.53." The cellist David Soyer, who died last February, was probably the moving force behind that recording, as he had been the Guilet Quartet’s cellist in the Concert Hall recording, and subsequently became the founding cellist in the Guarneri, a position he still held when the Philips recording was made. 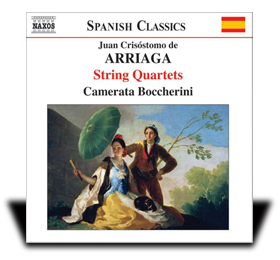 Unfortunately, what most of the recordings of these quartets seem to have in common is a short catalog life. That not only explains the astronomical asking prices for the Guarneri recording, but is also why the MHS offering of the Chilingirian Quartet’s 1975 recording (in a two-disc set, filled out by the Quartet No.1 of the 18th-century Swedish composer Johan Wikmanson) commands attention.

But there is a far more recent recording of the three Arriaga works, on a single economical CD, that is more generally available, more economical, blessed with richer sound, and uses "period instruments." (Of course, Strads and Amatis might be regarded as "period instruments," but not all of them are fitted out with gut strings now, or played with an understanding of "period performing practices.") This is Naxos 8.557628, on which the Camerata Boccherini makes an exceptionally strong case for this kind of performance.

Among other interesting versions are several that are less readily available now, but also richly rewarding: the New Vlach Quartet on Avenira 0172-2; the London-based Rasoumovsky Quartet ("period instrument" specialists, led by Simon Standage), on Ensayo ENY-CD-3424; the Cuarteto Casals on Harmonia Mundi Musique d’abord HMA 1957038; and the especially appealing Quartet Sine Nomine on Claves 509501. There is even a recording by a young Belgian foursome called the Arriaga Quartet, but it does not quite hold its own among these other performances.

The Naxos disc obviously has so much going for it -- it is the easiest to find, the least expensive, and musically utterly persuasive -- that it is a very reasonable first-choice, but none of these is less than fully satisfying. Any or all of them, in fact, may bring to mind the remark Artur Schnabel made about the Schubert piano sonatas, and which is hard to avoid quoting in such a situation: Schnabel described those sonatas, also composed by a phenomenal creative genius whose life was even shorter than Mozart’s, as "a safe supply of happiness."