Last month in “Material Obsession: Sonus Faber’s Maxima Amator,” I detailed my unboxing of the latest entry into the Italian company’s Heritage Collection of artisan-crafted loudspeakers. In that article, Sonus Faber’s VP of product development, Livio Cucuzza, described the values and processes in place at the storied brand’s headquarters in Arcugnano, Italy, that led to the new model, the only floorstander in the series. At the time, I shared my initial reactions to unboxing my pair of Maxima Amators—the product inserts, including the photobook, were greatly appreciated, as were the details of the design and construction of the loudspeakers themselves. I had already developed a keen interest when the model’s press release hit my inbox, but I was absolutely smitten with the actual set of loudspeakers that showed up at my door.

Having a complete sense of satisfaction with the Maxima Amators’ physical appearance in my room was only the first stage in getting to know these loudspeakers. After all, they weren’t designed merely as art pieces whose only function is to be visually admired by passersby. 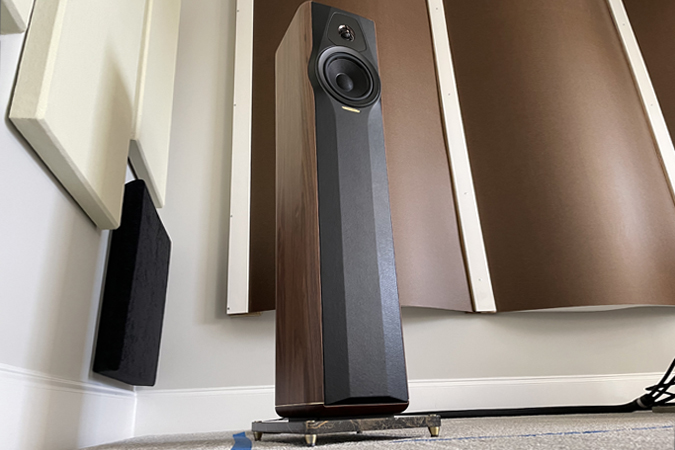 This month is all about the setup process.

There are a few housekeeping items we have to get out of the way before I describe the process of setting up the Maxima Amators in my room. First, when optimizing the placement of a set of stereo loudspeakers, I believe in approaching the task by listening and measuring in equal part. I want to ensure that the measured response I’m getting in my listening space is as neutral as possible, and to do that, performing acoustic measurements with good software and a quality microphone are invaluable. At the end of the day, however, it’s about creating the best possible listening experience, and to achieve that, I have to love the actual sound of my music through my stereo system. So it’s not a this-versus-that proposition for me: both listening and measuring are required.

Next, setting up good speakers is not a chore for me. The better the speakers, the easier they are to set up. Rarely will a good set of loudspeakers sound really bad if they’re set up symmetrically in a decent listening room and you adhere to customary placement guidelines. Yes, fine-tuning the placement and toe-in of a set of speakers will yield better performance, but if you have good speakers, you shouldn’t be faced with unlistenable sound out of the box.

My room is 20′ wide, with a slight bump-out to the right side of the right speaker. The room depth is 18′ 3.5″, and the ceiling height is 9′. I have polycylindrical diffusers on the front wall and absorption on the side walls, while the floors are carpeted.

The Maxima Amators are floorstanders, but they’re smaller than what I typically have in my midsized listening room. I was therefore careful to balance their placement to get the best bass response while also maximizing soundstage width and depth. The task was very straightforward. I placed a Behringer ECM8000 condenser microphone at my seated ear height—nine positions along the arc described by a 20″ radius at and around the listening position—taking a reading at each, then averaging the results. I used an MXL Mic Mate XLR-to-USB adapter to connect the ECM8000 to an Apple MacBook Pro laptop running the FuzzMeasure acoustic-measurement software. 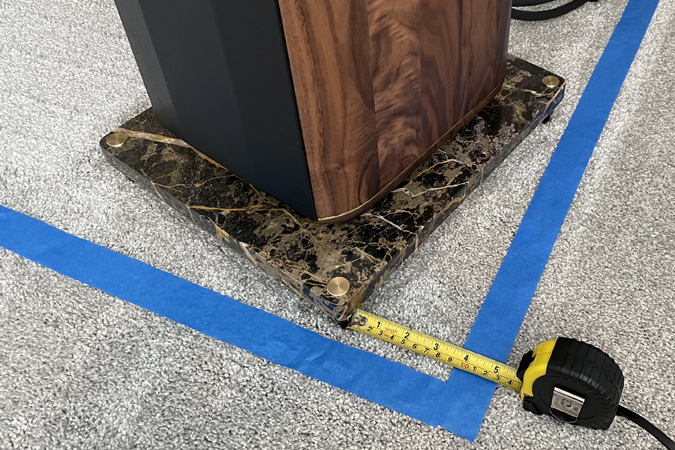 I quickly found that the distance from the rear-ported Maxima Amators to the front wall of my room was optimal in about the same positions that other speakers have been placed: the center of the rear baffles wound up 3′ from the front wall, which yielded the best overall bass response from the speakers. Any further out into the room and bass reinforcement suffered; any closer to the front wall and the bass frequencies became a little too thick. These differences were minor in the grand scheme of things, but they were important depending on the music I played. Bass extension, as you can see from the frequency-response chart, was +5dB at 35Hz in-room, with audible bass to just below 30Hz—very satisfying. Sonus Faber rates the Maxima Amator down to 35Hz, so this in-room result jibes well with their specifications. Moving them an inch closer or farther away from the side walls had no noticeable impact on bass extension. The speakers ended up 9′ 5″ apart and 11′ from the listening position. 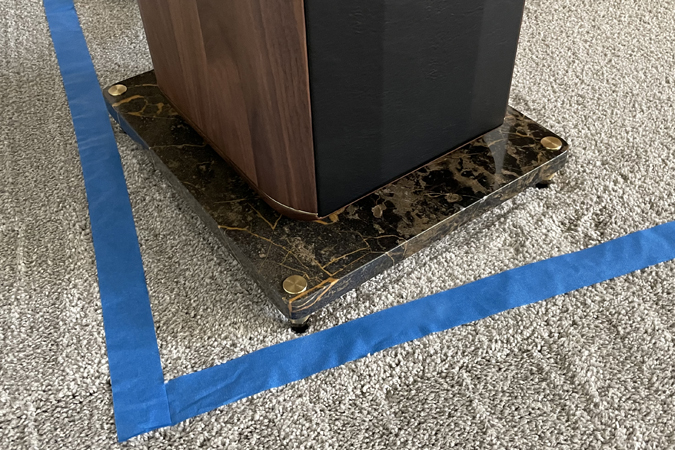 The frequency-response graph (20Hz-30kHz, 1/6-octave smoothing) shows a generally neutral response from 300Hz up, with a rise in the treble of about 3dB (peak at 10kHz) that gradually rolls off to -4dB at 20kHz. Bass peaks can be seen at 50Hz and 100Hz and are related to room modes.

Optimizing toe-in was quite easy, too, but there was a wrinkle. This is a prime example of why you need to measure and listen; ultimately, you have to be satisfied with what you hear, not what’s on a graph. Below are three frequency-response charts: the first is with the Maxima Amators firing straight ahead, with no toe-in (2kHz to 30kHz, 1/12th-octave smoothing). The chart shows a generally flat response until the absorptive nature of the room starts to contribute to rolling off the tweeter response, beginning at about 13kHz. By 20kHz the response is down -6dB.

This measurement is with the Maxima Amators firing directly at the microphone. The chart shows a treble response that rises, beginning at about 5kHz and increasing to +6dB by 11kHz, where it stayed until just shy of 20kHz.

Both of these extreme placements were ultimately unsatisfying. The first one, with the speakers firing straight ahead, sounded pretty good. However, there was less air around performers than I know is correct and the imaging precision suffered: I could vaguely place performers on the soundstage but with less specificity than I would have liked. The second placement, with the speakers firing directly at the listening position, tightened up the imaging quite a bit, but there was too much high-frequency energy. Although I would not refer to what I heard as being outright bright, the treble balance made many songs sound lightweight or too thin.

The Goldilocks toe-in is shown in the chart below. The Maxima Amators were angled in toward the listening position 18 degrees. The chart shows that the highs are up a couple of dB at 10kHz, and they’re basically flat by 14kHz. Conventional wisdom—OK, Harman curve-ish thinking—would lead you to believe that this would sound bright. It didn’t. At all. This placement achieved a near-perfect balance of high-frequency detail and air with zero brightness or listening fatigue. The soundstage was wide and super deep, and image placement on that soundstage was very precise. Man . . . the sound was pure magic.

I recall Sonus Faber’s press release announcing the Maxima Amator. The company stated that the drivers used in the design are “reference”-class units. These are very good drivers, folks. Note the smooth response with no egregious peaks or valleys at all. It’s long been known that soft-dome tweeters have more benign break-up than typical hard-dome designs. Perhaps this attribute, along with the overall quality of the drive units I mentioned previously, helps to explain the “sound” of the above chart. Or maybe the highs were simply well tempered by the full bass response. Regardless, this FR curve just sounded perfect to my 53-year-old ears (playback rarely exceeded 85dB at the listening position, and was usually in the 75dB area). This fine audible result was likely a combination of all of the above factors and maybe some I haven’t touched on. Whatever the reasons, the Maxima Amators’ highs were amazingly detailed but never harsh: an ideal balance was struck that made the listening, um, just right.

Now that the Maxima Amators were sited ideally and toed-in optimally, the last step in setting up the speakers was installing the spikes. The steel spikes that are included with the speakers screw into brass inserts in the marble bases. This gives the Maxima Amators wide, stable footing, and attaching them made an audible improvement. The bass became a touch tighter, and that gave the sound a slightly more visceral quality. Honestly, it capped off the setup perfectly: The speakers sounded just a shade more energetic and composed with rock music and the like. 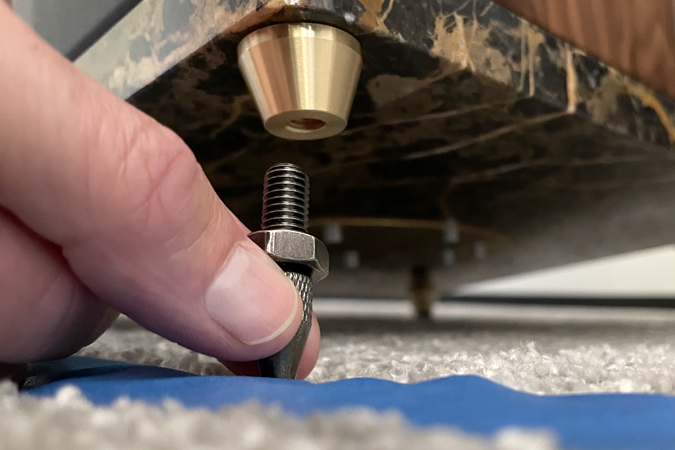 So there you have it. My pair of Maxima Amators was a snap to install in my listening room. A pretty great in-room response is one thing—an important one, in fact—but not the most important thing. How did the speakers sound? Next month you’ll find out in the wrap-up of my Maxima Amator experience.