Make no mistake, Munich’s High End is no ordinary hi-fi show—the scale is so jaw-dropping that you need to recalibrate your senses. The show comprised three vast exhibition floors, each seemingly the size of a major indoor concert arena, housing 550 exhibition rooms and 1500 brands. It was an awe-inspiring demonstration of the scale, richness, and power of the global audio industry. Everyone from the exhibitors to the visitors seemed to be revelling in the experience—in short, this show is to audio what Le Mans is to motor racing. 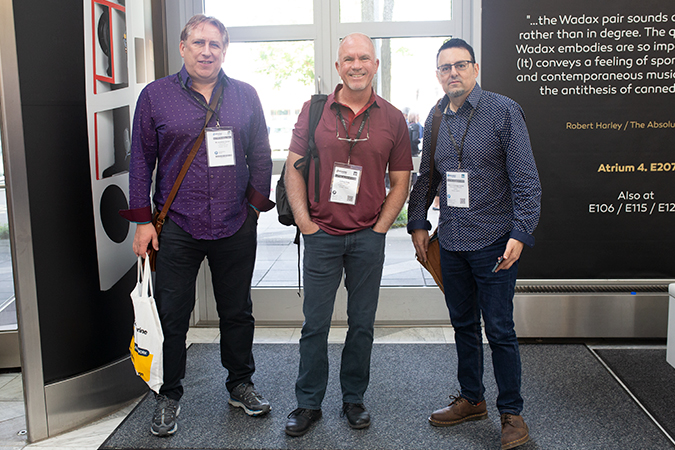 One of the main benefits of attending hi-fi shows is to broaden your mind and expand your frame of audio reference. There is simply no other place on earth where you can go from comparing CH Precision products to Naim, Simaudio Moon, and McIntosh Laboratory within the space of a few minutes. In addition, while few of us will ever be in a position to own some of the megabuck systems on demo, coming to a show and experiencing what is possible at the limits of the state of the art should be a mandatory education for every audiophile. If you don’t know how good the very best in audio reproduction can be, then how do you even know how to improve your own system or what to aim for? Unfortunately, every week I see far too many narrow opinions on various hi-fi forums handed down as gospel by fans of a particular brand. My advice? Go to the next audio show in your area, meet people, discover new music, and open your mind and your ears to new possibilities.

Vinyl systems were everywhere at Munich’s High End, reflecting the increased popularity of the format. Sure, almost everyone was streaming, but it was surprising how many manufacturers were using a high-end turntable in parallel to demonstrate their systems. A number of exciting new turntables debuted at Munich, which proves that the world’s greatest audio engineers believe there’s even more to be retrieved from those beautiful spiral grooves.

I prowled the halls seeking the very best in vinyl goodness, so here, dear reader, in no particular order, are the five systems that I felt delivered the highest-quality analogue sound at the show. 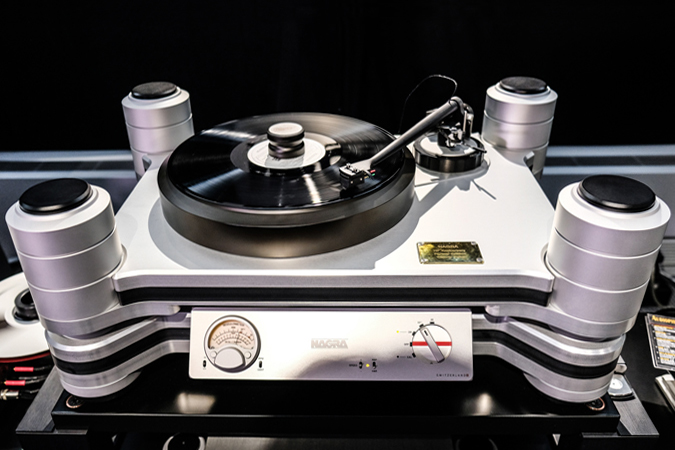 Nagra exhibited its first ever turntable—the Nagra Reference Anniversary, complete with a carbon-fiber unipivot tonearm, for €175,000. The platter is revolutionary. It’s made of two materials: clear acrylic on top and a very dense and vibrationally inert material called Exium AM on the periphery for maximum flywheel effect. Exium was developed by CNES (Centre National d’Etudes Spatiales, the French equivalent of NASA) for measuring seismic activity on Mars because of its resistance to vibration. The transparent platter allows you to view the twin-motor belt-drive mechanism, echoing the exhibition backs often used in Swiss watches to display the caliber mechanism. The turntable uses a floating hydraulic and sprung mechanical suspension, and Nagra claims superlative resistance to vibration with a turntable resonant frequency of only 3Hz. VTA and tracking force adjustment are possible during replay. The rest of the system was made up of an entirely new Exium AM-bodied Nagra cartridge and Nagra’s elite HD range amplification components, including a prototype HD phono stage. The system used Wilson’s Chronosonic XVX loudspeakers and WATCH Dog subwoofers. 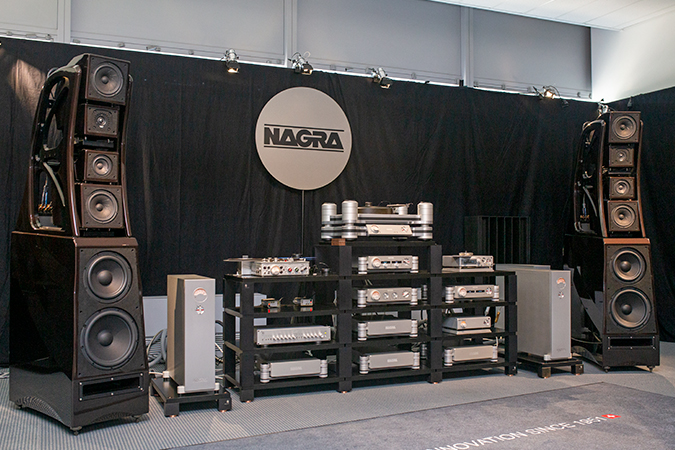 The system sounded like a million dollars (and it cost it too!). There was a sense of exceptional clarity and transparency allied to astonishing scale. This is one of the few systems in the world that can genuinely render the full force of an orchestral climax. Dean Martin’s “I Don’t Know Why” was so lifelike that people in the audience froze because it sounded for all the world like he was suddenly in the room. 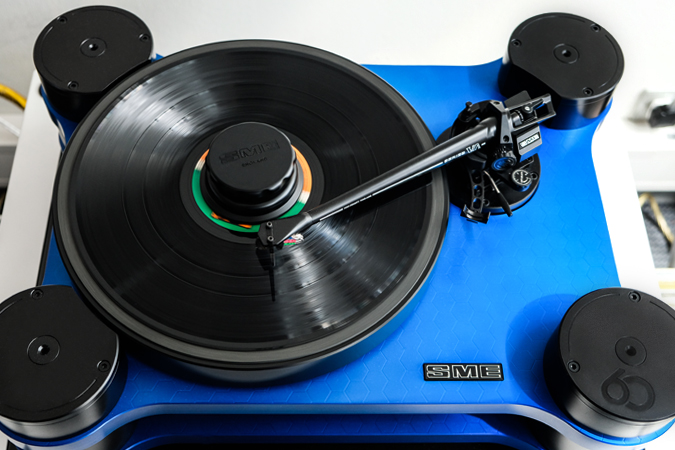 SME, the legendary British turntable and tonearm company, debuted its new Model 60 turntable at Munich’s High End in a suitably regal royal blue. Not content with producing tonearms that have been a world standard for over half a century, the company now offers an impressive range of vinyl spinners for the cognoscenti. Top of their range is the Model 60. At 48kg, this is the kind of turntable Brunel might have built if he hadn’t been busy building Britain’s Clifton Suspension Bridge and the Great Western Railway. Everything is engineered on a massive scale—a huge and heavy precision-cut aluminium sub-chassis is supported by a completely new elastomeric suspension system, offering damping in both the horizontal and vertical planes. Heavy investment in new tooling and years of development have created this landmark design. 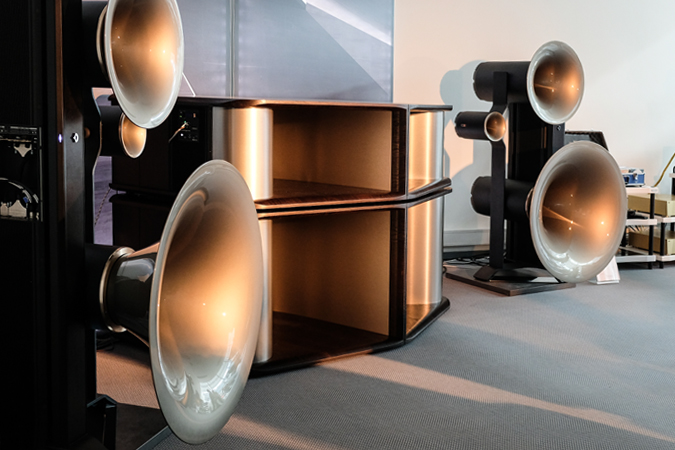 Partnered with a new prototype preamp from Avantgarde Acoustic and a CH Precision phono stage, the system was completed by the gigantic active Avantgarde Trio XD loudspeakers and Basshorn SD subwoofer array. This system offered soaring dynamics, limitless power, and astonishing transparency, yet despite its size, it also offered impressive delicacy. The drawbar Hammond organ on Tommy Schneider & Friends’ “Ain’t No Sunshine” sounded so live and visceral I nearly tripped over his Leslie! 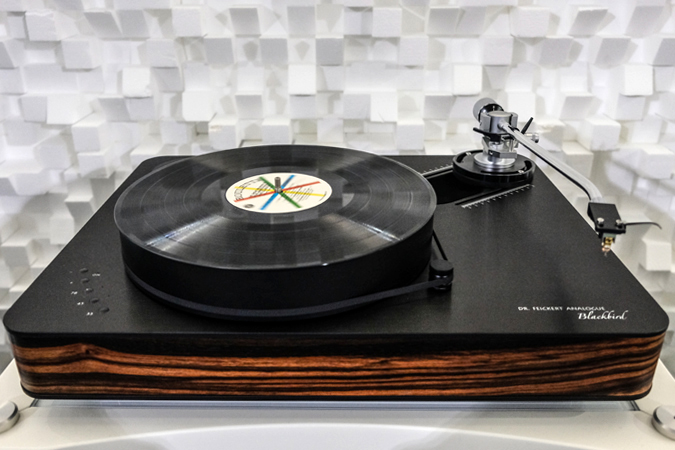 Displayed in what was visually one of the nicest rooms at the show, this system sounded every bit as good as it looked thanks to synergistic component matching. The turntable was a Dr. Feickert Analogue Blackbird complete with a high-end Dynavector Te Kaitora Rua cartridge. Amplification comprised the Classé Delta Pre preamplifier and two Classé Delta Mono monoblocks with impressively large VU meter displays, which harked back to analogue’s mid-1970s golden era. 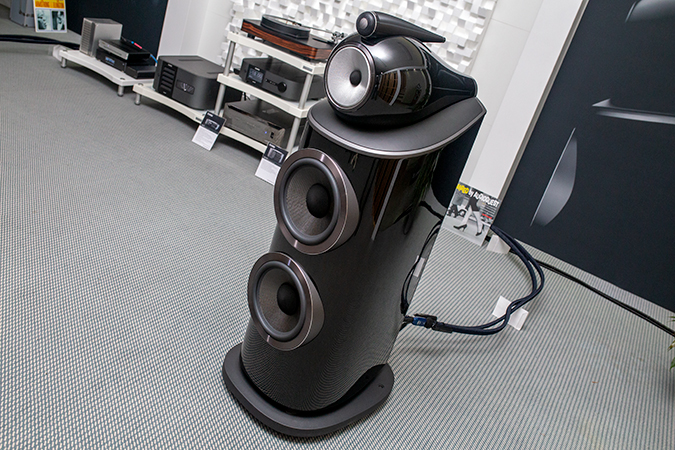 The loudspeakers were Bowers & Wilkins’s utterly gorgeous 801 D4 model finished in sensational gloss black. I’ve often found earlier generations of the B&W 801s slightly lacking in speed and snap, but the latest D4 version is a revelation. Rompasso’s “Angetenar” had incredible transient attack, and the synth effects and electronic drums hit hard, fast, and low. On Delta Moon’s stunning live album Baby, Please Don’t Go, the system produced bass with tremendous solidity and articulation, while the soundstage it created was particularly notable for its superb depth. 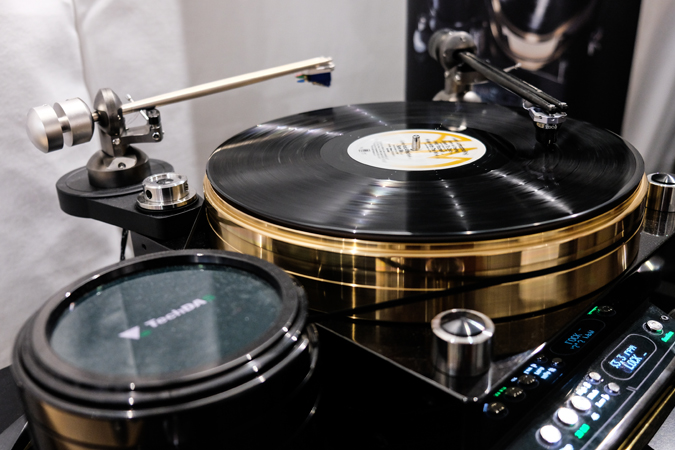 TechDAS makes some of the most technically advanced turntables in the world, with an aesthetic that wouldn’t be out of place on the Starship Enterprise. The Premium S turntable is a ground-up redesign of the Air Force III with a much heavier gunmetal platter, a more powerful air bearing system, and an enhanced suspension system. All the usual TechDAS features, such as vacuum clamping and quartz-locked speed control, are provided and presented in a simply gorgeous black and gold finish—indeed, this was probably the most striking turntable at the show. The rest of the system consisted of a CH Precision P1 phono stage, L10 preamplifier, and two CH Precision M10 monoblock power amplifiers, each rated at 300W into 8 ohms. The speakers chosen were the Rockport Technologies Lyras with cast-aluminium cabinets and carbon-fiber-sandwich midrange and bass cones. Mariza’s Foi Deus sounded gloriously rich, warm, and transparent—a surprisingly rare combination. On this track, Mariza is accompanied by an orchestra, and the system reproduced everything from the plucked double bass to the highest notes on the harp with outstanding clarity and timbre. 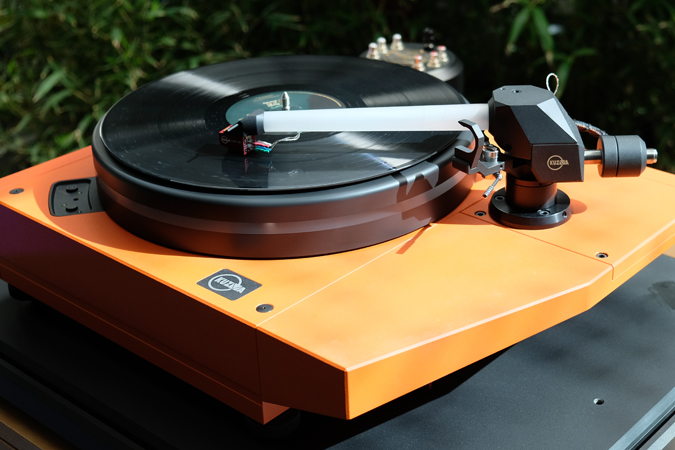 This room really was something special. Sonically, it was as enjoyable as many of the vastly more expensive rooms, but at the cost of a nice Porsche rather than a Bugatti Veyron. Fronted by a stunning orange Kuzma Stabi R turntable with Kuzma arm and Kuzma CAR-60 moving-coil cartridge, the sound was beautifully integrated and the presentation was incredibly organic. Thievery Corporation’s “Time + Space” sounded very transparent, detailed, and fast. It was hard to believe that this system used valve amplification, so rapid were the transient drum sounds and synths. Amplification was by SJS Electroacoustics—the Model 7 preamplifier fed into the SJS Model 5 Silver Enhanced power amplifiers, which are a 300B design with point-to-point silver wiring and star earthing for enhanced transparency. The Living Voice OBX-RW4 loudspeaker is the ultimate evolution of this model, with an outboard crossover, hence the OBX designation. The outboard crossover is specifically engineered to reduce the impact of microphony on sensitive electronic circuits. The OBX-RW4s painted a beautifully wide and deep soundstage with a surprisingly powerful delivery, considering their modest and easily accommodated dimensions. The treble was sweet, whether the system was rendering the metallic sheen of a cymbal or female vocals, with no sense of hardness or sibilance.

This is the kind of system that, once installed in your home, would deliver a lifetime of musical pleasure, leaving you to concentrate solely on exploring music. 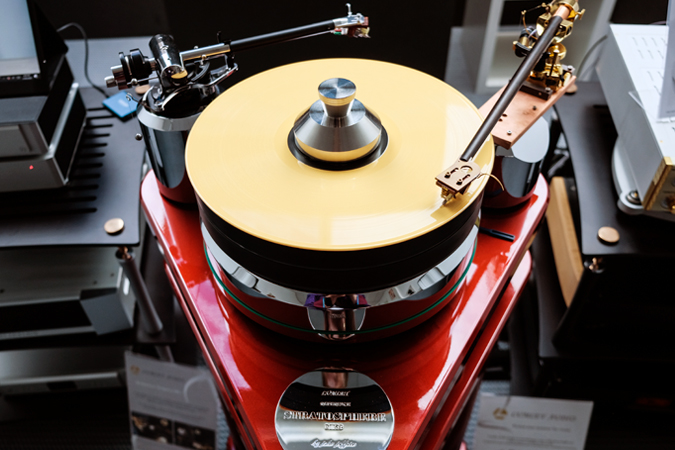 This small audio firm from England ceased trading many moons ago; however, they’re back. The firm is still led by their original founder, John Jeffries, who has come out of retirement to supply a growing number of vinyl fans with a completely re-engineered Stratosphere Mk3 turntable. The show table was finished in chrome and came with a bright red integral support stand, so I don’t imagine you’d be able to sneak this one into the house without your spouse noticing! Sonically, the Stratosphere offered scale, impact, excellent bass weight, and good timing. It was nice to see this rather unique British turntable design return.