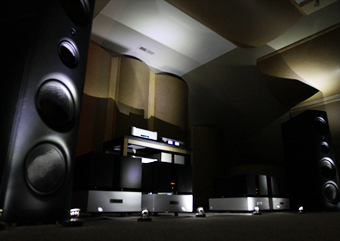 Well, as I write this, it’s not really over -- we’re still about 12 days out from the start of The World’s Best Audio System 2012, which takes place March 30-31. But if you’re reading this on April 1, then the event is over, as it finished up just last night. Whew! You can read all about it and see all the photos on www.SoundStageGlobal.com. I’m hoping that all went smoothly, of course, and that the sound in my Music Vault listening room set new standards for the high-fidelity playback of music recordings. That is/was, after all, the ultimate goal of the entire exercise. But a lot of things would have had to come together to make that happen, and the variables and pitfalls are many.

Setting up a TWBAS system is not unlike setting up a stereo at, say, the Consumer Electronics Show or Munich’s High End: A number of manufacturers with varying degrees of familiarity with one another’s products all come together in a room they don’t really know to assemble, in a very short time, a very expensive stereo system, and then try to coax from it the very best sound they can. It’s not an ideal prescription for world-class sound.

But TWBAS 2012 had a few basic advantages over a typical audio show. Let’s start with the room.

The Music Vault listening room, in my home in coastal North Carolina, was designed and built with only sound in mind, and that mind was one of the great ones in acoustic design: Terry Montlick, now retired. (You can read about Terry’s background in "Building the Music Vault," and about the outcome in "Part Two" and "Part Three.") In 2009, Terry described the results he achieved in the Music Vault thusly: "I’d put it in the 95th percentile." High praise indeed. But even as we were enjoying the sound of the completed Music Vault, there was one area in which Terry felt its sound could be improved still further. The polycylindrical diffusers used throughout the room were themselves somewhat resonant, he noted. Now, these diffusers aren’t the direct sources of sound -- that would be the loudspeakers -- and so it’s up for debate just how much audible difference could be made by damping them. Terry conjectured that it could make a difference, though he wasn’t convinced that that difference would be detectable in any acoustical measurements taken of the stereo system playing in the room.

But the possibility of improvement always stuck in the back of my mind. As TWBAS 2012 drew closer, I decided that the time was right to address the diffusers, and even though there was no guarantee of any sonic payoff, that’s what I did. Each diffuser is now under tension, braced and packed with a combination of fiberglass insulation and polyethylene foam. When I tap one of them, I get a dead thunk -- much like what you hear from a good, well-damped loudspeaker cabinet. I can’t say that I heard an immediate difference in the sound of my system, but acoustical measurements taken in the Music Vault of the Sonus Faber Amati Futura loudspeakers, which I’ve just reviewed, reveal that a slight depression in the bass that I’ve previously measured with many speakers in this room is now gone. Even if audible, and the improvement is minor, the peace of mind it gives me as I prepare for TWBAS 2012 is already worth it. The Music Vault has proven to be a better acoustic showplace for a fine audio system than any hotel room I've ever heard. It now might be just a little bit better.

In addition, a representative of the manufacturer of each component used in the system -- and, in several cases, the actual designers of those components -- will be present at TWBAS 2012. If there’s any tweaking to be done to any piece of gear -- a setting, a slight shift in placement -- it will be done by those who know that gear best. That’s an inherent advantage of TWBAS. I don’t know how many times I’ve heard a manufacturer tell me, at an audio show, that they’re using a component from so-and-so company, but "We don’t know that much about it." Well, if you don’t know that much about it, it’s hard to imagine that you can get the best sound out of it.

I don’t think anyone will disagree that the most critical aspect of setting up an audio system involves the placement of the speakers in the room. In the case of TWBAS 2012, this will be done by me and by Alon Wolf. Obviously, Wolf knows his Magico Q7 loudspeakers better than anyone; and I, over the years, have positioned, measured, and listened to a great many speakers in this very room. Hopefully, our collaboration will yield the outstanding results we both strive for.

Was it a disaster? Did something blow up? Or did we enjoy the best sound ever? Read all about it, as they say. As for what’s next, I have a few ideas that will leverage at least parts of the TWBAS 2012 system for some interesting and, I hope, enlightening articles to come later this year. You’ll hear more about that in the coming months. Thanks for coming along on my audio adventure.