Setting Up a Reviewer’s Audio System

This past week, SoundStage! Network writer Randall Smith moved into a new house with his fiancée, Amy. This was a special event in his life, almost as much because he was finally going to have a dedicated listening room as because he was setting up housekeeping with his bride-to-be. Randall had been pining for a new room for some time, and now, finally, his dream was becoming a reality.

But moving into a new room poses a multitude of problems for a reviewer. First, we had to clear Randall’s reviewing schedule. With the room being the single greatest determinant of an audio system’s sound quality, setting that variable is critical to the accuracy of Randall’s future reviews. Neither he nor I wanted a review product entering this new acoustic environment midstream. What we did want was for Randall’s system to be back up and running as quickly as possible, and with the full measure of its sound-quality properties firmly entrenched in our minds. We began with some very basic steps.

Our first order of business was to set up Randall’s system in the new room. This involved positioning the gear so as to maximize the efficiency of routing cables and ease the swapping-out of components. It was a straightforward task; Randall’s system is anchored by a single-chassis Simaudio Moon Evolution 600i integrated amplifier. His Bel Canto DAC3 D/A converter is extremely compact, and his home-theater functionality is handled by an Integra DTR-80.1 A/V receiver instead of separates. A Sony PlayStation3 is his primary HT source, while an Apple MacBook Pro laptop computer stores and plays his audio files. Randall’s system is tethered together with Analysis Plus cables, and his Pioneer Kuro television was mounted on a bracket almost flat against the front wall. 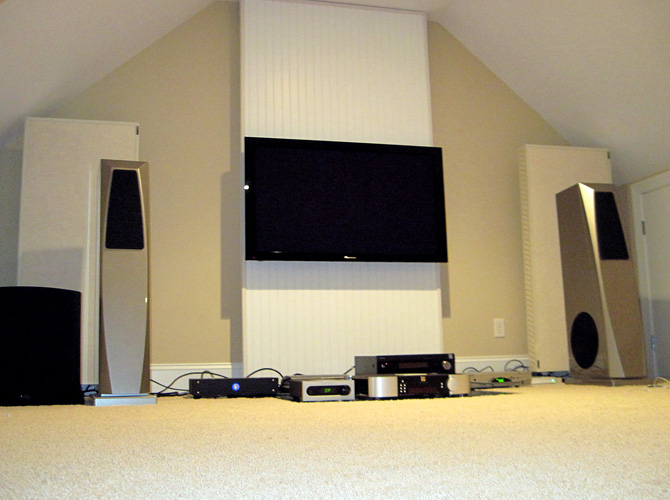 Once all the components were in place, we installed some basic room treatments. These would need to be adjustable in terms of location; we might have to move them around once the speakers were in place. This was made easy by the Real Traps room treatments, which are lightweight. We covered the first-reflection points on the sidewalls, installed bass traps in the corners behind the speakers, and placed some absorption panels on the rear wall as well.

Now it was time to get Randall’s speakers in place. This is where the rubber meets the road: the interface of speaker and room is what will ultimately determine the greater portion of the quality of what Randall hears. Because he reviews audio equipment, he needs as neutral and transparent a sound as possible, so that he can hear the specific character of the component under review. Must-haves are a fairly flat frequency response and a wide, deep soundstage.

For this job, we had several tools at our disposal. First, in addition to RS’s reference Rockport Technologies Mira loudspeakers, we had a pair of KEF Reference 205/2s that he’d just reviewed. The Rockports have rear ports and side-firing woofers, the KEFs front ports and forward-firing woofers; we thought it would be instructive to separately set up and optimize each pair of speakers, see how the room reacted, and discover what kind of sound quality we could attain. 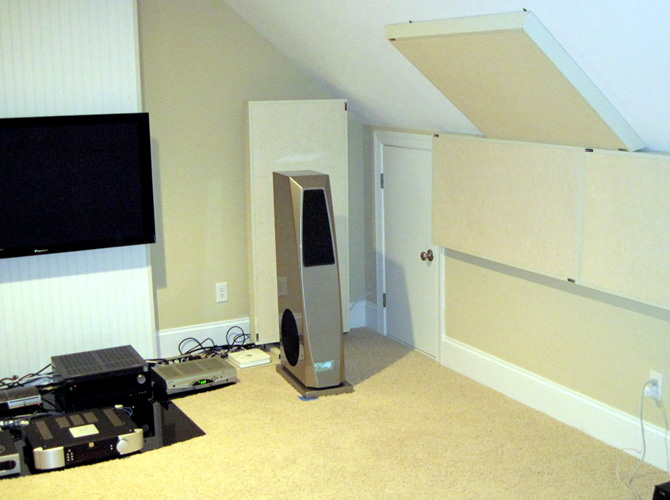 We began by taking some basic sets of measurements using the FuzzMeasure software, and a Behringer microphone hooked up to Randall’s MacBook Pro via an MXL Mic Mate XLR-to-USB preamp. Seeing exactly where the room’s bass modes were and listening to some reference tracks between measurements was key to developing a firm understanding of the room. We started by setting up the speakers to form an equilateral triangle with the listening position, then moved the speakers, in increments of a couple of inches, toward and away from the front wall. We also adjusted the listening position. Randall’s room is fairly narrow (22’L x 13.5’W x 8’H), which limited the degree of flexibility we had with respect to orientation to the sidewalls. We did our best to balance the distance between the speakers with the distance from each cabinet to the corresponding sidewall -- we wanted enough distance between the speakers to maximize the soundstage width while minimizing the sidewall interactions. Positioning speakers always involves compromises and tradeoffs.

This process of measuring and listening took about 2.5 hours. The KEFs ended up closer to the front wall, to give them more boundary reinforcement in the bass, while the Rockports were farther out into the room. The fine-tuning process involved adjusting the toe-in of each speaker to produce the most precise image specificity, along with the widest, deepest soundstage possible. Once the final locations for both sets of speakers had been determined through the measurements and listening, we marked the final speaker positions with tape and ran some comparisons: We moved each pair of speakers into position, listened to a series of reference tracks, then quickly moved them out and replaced them with the other pair and listened to the same tracks, noting tonal differences, soundstaging and imaging characteristics, attacks and decays, dynamic capability, etc. 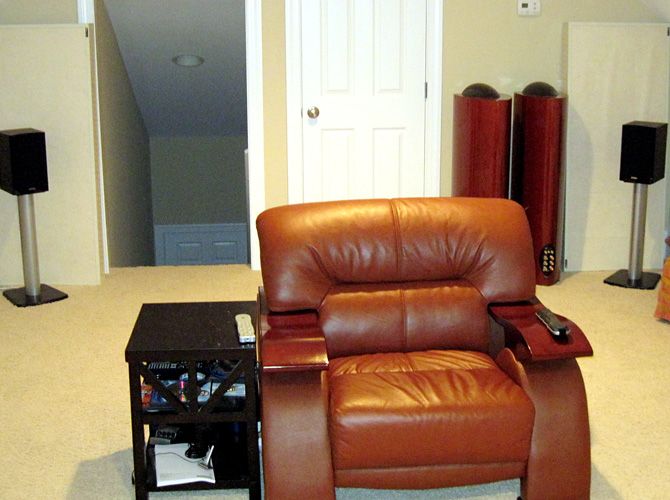 The differences between the Rockports and the KEFs were instructive. The KEFs had a strikingly clear midrange that placed singers slightly forward in the soundstage and presented them as ever-so-slightly larger than life. We could hear deep into recordings, with a vivid sense of the textures of voices, so revealing were these speakers. Highs were extremely detailed and balanced on the brighter side of neutral, but this resulted in an ultra-revealing nature that could sound amazing with high-quality recordings. Bass was tight but not all that deep.

The Rockports countered with a midrange that was equally clear, with singers set slightly farther back in the soundstage, which gave a better sense of soundstage depth. Highs were more neutrally rendered, with an extremely natural, evenhanded quality. Bass through the Miras was much deeper, even tighter, more articulate, and with a greater sense of weight and slam.

We concluded that, once their positions had been optimized, both speakers sounded simply outstanding; either pair would constitute a good tool for an audio reviewer. RS and I ultimately preferred the Rockports, however, for their deeper, more powerful bass response and more neutral (if less dramatic) character in the mids and highs.

At the end of the day, Randall and I were satisfied that we had his system singing a great song. Our listening, along with very respectable sets of in-room measurements, gave this editor confidence that Randall’s new, dedicated listening room is a good environment in which to accurately assess review components. More important, RS was thrilled with the performance of his audio system in his new room. Now to get some products shipped to him, so he can earn his keep around here . . .