By now you know that since 2017 I’ve been on a downsizing exercise. I decided to divest myself of my Magico-Soulution audio system, which retailed for more than $400,000 USD, and reinvest less of that money -- a lot less -- in my next stereo system. But there was a problem. It’s easy to decide to spend less money -- that proposition is always attractive. But getting less performance than I’m used to . . . well, that was a high hurdle to jump . . . or not.

The challenge was to do as any audiophile would -- maximize sound quality for the dollar spent -- and it began in an odd place for a reviewer: Instead of buying a new amplifier at an industry-accommodation price of about 50% of retail, I could buy one used. And it’s worked out great. I’m so thrilled with my used Boulder Amplifiers 2060 amplifier ($44,000 retail when available) that I feel I’ve actually upgraded in that department, despite the fact that I’ve got far less money invested in it than I had in my Soulution 711 stereo amplifier ($65,000 retail). Add to that that the Boulder is in mint condition, and fully tested by Boulder at their Colorado factory. We audiophiles often speak of that desert-island component . . . the 2060 is it for me.

Speakers are another kettle of fish. First, budget: State-of-the-art speakers generally cost more than state-of-the-art amplifiers. That point could be debated, I’m sure, but my ears have convinced me to spend more of my stereo budget on loudspeakers than on any other component in my system. Always. It’s been a recipe for stellar sound chez Fritz for many years. The second consideration is my room. Although in terms of volume my new room isn’t altogether different from the Music Vault, its layout dictates that I choose smaller speakers -- not small speakers, just small-er. The Magico Q7, Rockport Arrakis, and Wilson X-2 models I’d owned before are among the largest speakers ever produced for home use, but their sizes -- and prices -- make them inconceivable for use in my new system and room. For sure, I wasn’t now shopping for minimonitors -- but this was the first time I’d ever found myself browsing midsize floorstanders.

In an October 2017 “Opinion” I set my speaker budget at $40,000/pair retail. For that kind of cash, I expected to get a three-way speaker with bass extension down to about 25Hz in-room, which a) is as close to transparent to the source as I can get, b) is not impossible to drive, and c) provides the spacious, open, yet precise sound quality I enjoy. And, of course, anyone who knows me knows that I’m a stickler for exceptional build quality: My experience has shown me that, so often in high-end audio, the concept exceeds the execution. What looks perfect in photos and renderings is frequently disappointing in reality, and I can’t stand that. Oh, and the speaker must have stellar technical measurements. I know my ears can fool me -- having the reassurance of a solid set of speaker measurements to back up my listening impressions is a must.

Over the past decade-plus I’ve had two go-to speaker brands: Magico and Rockport Technologies. Although there are many differences between the speakers offered by these two companies, I’ve always been thoroughly satisfied with the sound their products made in my Music Vault. I’ve also been happy with their build quality. Magicos and Rockports are built, measured, and quality-controlled to the nines. You get what you pay those high prices for. So yes, the Rockport Avior II and the Magico S5 Mk.II were on my radar. Also a strong possibility was the EgglestonWorks Viginti. I’d been impressed with this speaker ever since hearing and seeing it in Munich in 2017, at High End. EgglestonWorks has upped its design game in recent years, and the Viginti might be the best thing they’ve ever made. I also toyed with the ideas of the Bowers & Wilkins 800 D3 and the Paradigm Persona 7F, though I’d place those models a fair bit behind the other three. 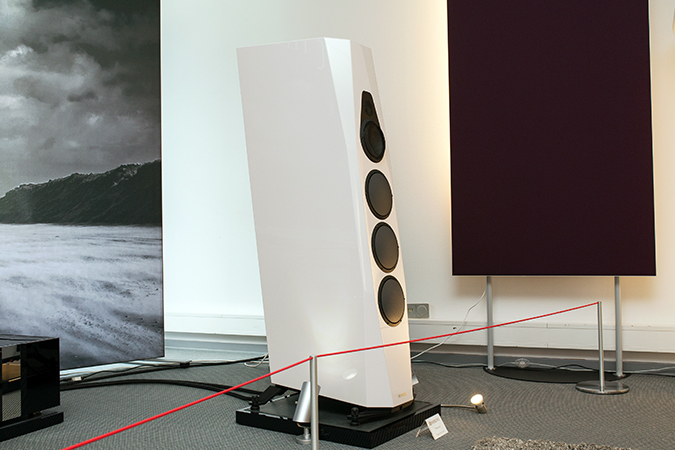 My eventual winner revealed itself at High End 2018: Last May, when I heard the Tonda loudspeakers ($38,000/pair) from Vimberg, a subsidiary of the German company Tidal Audio, at the Munich Order Center, I was enamored on the spot -- more than enamored. From a sound-quality perspective, it solidly ticked every box: First, it had that open, spacious quality that I love to hear these days -- the antithesis of dark and closed-in -- but it also had the bell-like clarity that is the hallmark of Tidal speakers, which I’ve always been drawn to. The bass was really deep and taut, courtesy three 8” woofers per side. Add to those qualities another that I saw as an unexpected bonus for a reviewer: the Tondas could play loud and super clean. Could I really attain this level of performance while staying within my $40k speaker budget? These midsize floorstanders managed to energize the large Munich demo room with propulsive bass while casting a huge soundstage, and they maintained these traits at all volume levels. Although my audition wasn’t exhaustive, the 40 minutes I spent listening to the Vimberg Tondas was more than enough: these speakers thoroughly impressed me. Going into the demonstration at High End, I wasn’t sure if designer Jorn Janczak could inject the Tidal DNA into a speaker that costs significantly less than the Masterpiece models that roll out of his offices. But it seems that he could, and has.

But while sound quality was a huge factor in my decision-making process, it was only one of several.

Some of the exalted construction characteristics I’d grown accustomed to with my past loudspeakers of choice are not present in the Vimberg Tonda. For instance, unlike the damped-aluminum construction of the Magico Q7, or the constrained-layer composite cabinet of the Rockport Arrakis, the Tonda’s cabinet is made of a far more common and humble material: high-density fiberboard (HDF). I had to wrap my geeky audiophile head around owning a speaker that was so, well, ordinary. Jorn Janczak was quick to point out that the HDF he uses is actually a waterproof variety that can be submerged in a bathtub without deformation. Additionally, the Tonda’s internal bracing is extensive, which helps explain why a speaker measuring 56.7”H x 11”W x 25.6”D can weigh 212 pounds. Still, there’s no getting around the fact: it’s made of wood.

What helped convince me that the Tonda’s build quality would pass muster were not the aforementioned marketing talking points. I spoke earlier of execution, and it’s been with this aspect of speaker manufacture that Tidal has made a name for itself. Tidal is almost universally known among its proponents for the extreme -- no, unique -- qualities of build and finish of its products. I chose to trust that reputation.

SoundStage! reviewers agree. In his review of Tidal’s Piano G2 speaker, Aron Garrecht wrote: “Of all the speakers I’ve reviewed or have seen at audio shows, I’d never seen a pair assembled and finished with this level of attention to detail and craftsmanship.” In describing the G2, he used such words as impeccable, flawless, and exacting. Granted, the Tonda is no Tidal, but I’m hopeful its execution will exhibit as much attention to quality as do the Tidal models.

Next, the drivers. I’m used to speakers with drive-units designed specifically by companies able to do such complex engineering in-house. Tidal claims as much for its designs, with drivers codeveloped with Accuton that are exclusive to Tidal speakers. The Tonda’s drivers are not proprietary to Vimberg, however. Other manufacturers -- e.g., Marten, in Sweden -- use Accuton’s Cell drivers. Hmm. 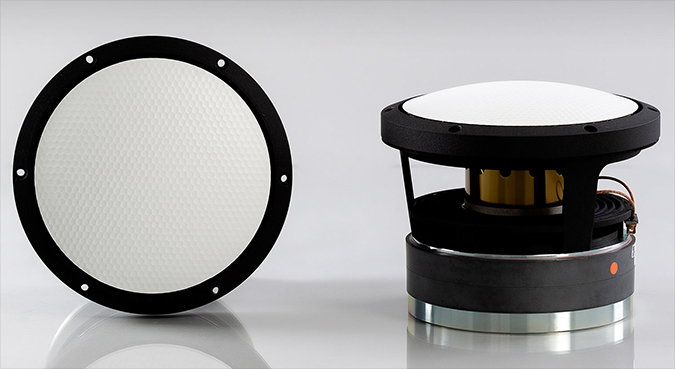 But I found this lack of exclusivity fairly easy to overcome. After all, my experience with companies that make their own drivers has not been uniformly positive. They can blow up just as OEM drivers can, and they can have manufacturing defects and measurement anomalies just like off-the-shelf drivers. As for the Cells, after I’d perused Accuton’s website and read the Klippel-based measurements they publish, the realization hit me that I actually have much more info with which to assess the Accutons than I do for the bespoke drive-units of some other manufacturers. The Cells’ distortion measurements certainly look superb, and Janczak's crossovers tame the frequency-response nonlinearities amazingly well. And though they’re off-the-shelf drivers, the Cells ain’t cheap. The 8” woofer used in the Tonda sells on www.madisound.com for $1003 each -- and each stereo pair of Tondas includes six of them. Each 6.5” midrange costs $903, and each ceramic tweeter $442. That’s $8708 worth in driver cost alone for a pair of Tondas. Yes, those are retail prices, but the drivers used in many expensive speakers cost nowhere near as much. Expensive OEM drivers alone don’t guarantee a high quality of sound, but it was one more data point I took into consideration.

So I jumped in with both feet and bought a pair of Vimberg Tondas in Summit White. I’ve asked Jorn Janczak to document the making of my set of Tondas -- photos, measurements, etc. -- so I can share the process with you in a feature article next month. I hope he can prove to all of us -- and especially to me -- that the Vimbergs are worthy siblings to the Tidals. And worthy of being my reference loudspeakers for years to come.

Am I setting my hopes too high? Am I expecting to be as impressed as I’ve been in the past, when I spent multiples of what I’ve just spent on the Vimberg Tondas? I don’t know yet -- and I’ve been let down before.

But I’ve sent the wire transfer. My fingers are crossed. Jorn Janczak, the ball’s in your court.