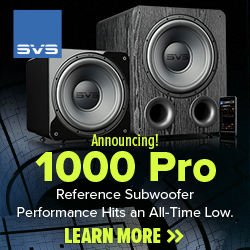 A Measured Approach to Room Acoustics

In September 2018 I wrote “Jeff’s New Room,” in which I wrote in detail about moving into my new listening room after selling our previous home and spending some time in a rental house. The room had not yet been acoustically treated when I wrote the piece, and it remained largely untreated throughout the listening sessions for the first product I reviewed there, the EgglestonWorks Kiva loudspeakers. The Kivas are terrific speakers -- despite being asked to perform in a room in which little attention had been paid to acoustics, they sounded quite good in my new space.

But I knew they could sound better. Which meant that I also knew that I wanted every product I reviewed after the Kivas to be given its best chance to produce outstanding sound. So I abandoned my original plan of a new listening room comfortably furnished to look “normal.” It was time to get serious about room acoustics . . . again.

But it wasn’t time to get carried away. I didn’t plan to forget the more sensible approach to system building I’d taken on -- to keep within a budget far below what I’d invested in my last listening room and stereo system. I decided to acoustically treat my room and make it a more attractive space for reviewing, but to do both within the confines of an unspecified but still-tight budget.

The first task was to reorient the room. Originally, I’d placed the speakers along the wall opposite the entryway. This made sense to me at the time -- it made ingress and egress more logical -- it fit the way I wanted visitors to interact with the room. The problem with this layout was that it put sloping ceilings to either side of the speakers, which consumed valuable volume and encroached on the speakers themselves. It was best avoided.

Now as you enter the room, the speakers are along the left wall. That wall has the advantage of parallel and perpendicular lines, thereby giving me more volume around the speakers to work with: It would be easier to treat acoustically, and would give me more space between each speaker and its sidewall, which would give me more flexibility in positioning speakers.

I referred back to my previous listening room, the Music Vault, designed by Terry Montlick in 2005. Terry, a graduate of MIT, has an impressive list of academic and real-world accomplishments in acoustics and neurobiological sound communication. He’d also written his own software to analyze room acoustics. When Terry designed the Music Vault, the main feature of the room was its huge array of polycylindrical diffusers. He explained their use in an article I wrote in December 2005:

Schroeder diffusers are a very popular and effective choice. These diffusers have either various-depth wells or different-height raised surfaces. They diffuse sound via the phase interference produced by soundwaves when they reflect from these varying-depth surfaces. But I chose specifically not to go with Schroeder diffusers for this project. A little-known fact about these diffusers is that they inherently absorb a fair amount of sound over a wide range of frequencies.

Instead, I chose an oldie-but-goodie design: the classic polycylindrical diffuser. This diffuser doesn’t absorb sound like the Schroeder. It is a simple curved surface that diffuses sound by simply reflecting it in different directions when it bounces off different parts of the curve. I can’t claim originality here. I chose a polycylindrical design right out of a 1941 Journal of the Acoustical Society of America paper. “Polys” also have the advantage of being easy to build. All you need to do is bend a piece of hard, reflective material, in this case, 1/8” Masonite.

I loved the look and performance of these diffusers in the Music Vault, and knew I wanted them to be the centerpieces of my new room’s design. I placed a call to Randall Smith, a friend and ex-SoundStage! reviewer who’s also a general contractor and pretty handy with a cordless drill. He’d built-out the original Music Vault, including constructing, from scratch, the polycylindrical diffusers Terry had prescribed. “Randall, want to build some diffusers this weekend?” 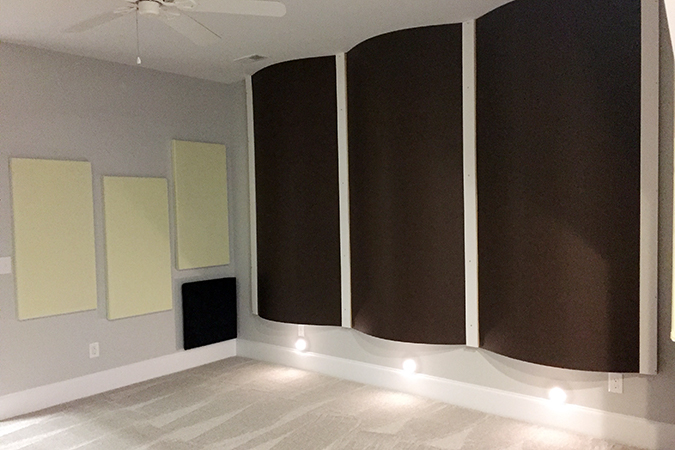 Having the experience of building these the first time around greatly reduced the amount of time and planning we needed the second time. My new diffusers are made of the same 1/8”-thick Masonite, though this time in a chocolate color that I like better. They’re stuffed with fiberglass insulation, and capped on each end with acoustic foam. I think they look terrific. 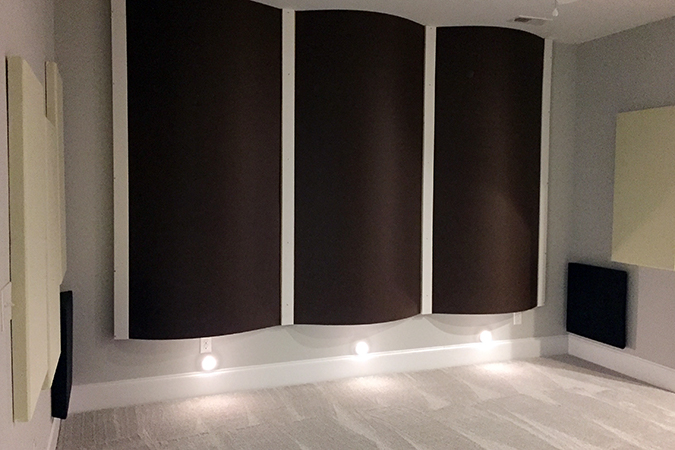 I also chose a couple of inexpensive off-the-shelf products for the new room. In the front corners I installed two Auralex SonoLite bass traps (24”W x 24”H x 3”D), which have a noise-reduction coefficient (NCR) rating of 1.15. I know I’ll likely need larger bass traps for lower frequencies, but this pair of SonoLites would give me a start -- and anyway, from there I’d want measurements to guide my choices of any additional bass treatments. For the shallow sidewalls, I bought four RoomSonic wall panels, each 48”H x 24”W x 1”D, faced with fabric and comprised of mineral wool. This type of product is a classic choice for broadband absorption, and looks great to boot. 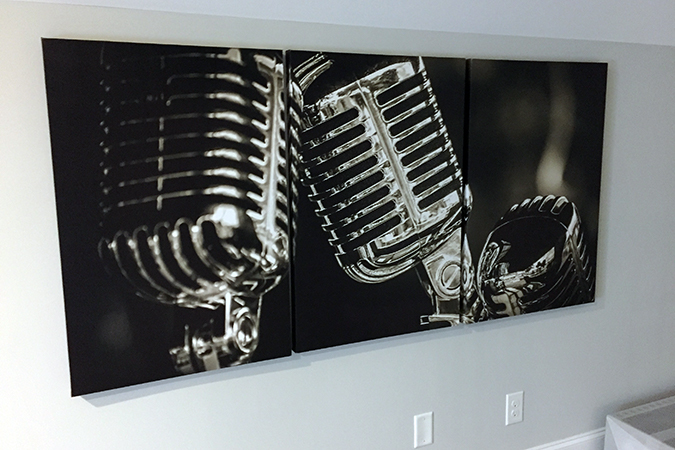 I hadn’t intended to do a comprehensive build-out of my new space, as I’d done to create the Music Vault 14 years ago, and I didn’t. But I did manage to greatly improve my room’s acoustics for very little money: less than $1000 in materials, not including Randall’s labor. I added some remote-controlled puck lights under the diffusers for ambiance, and some artwork to the rear wall so the place doesn’t look too boring. All in all, I’m thrilled with the look -- and the sound.

Oh, right. I set up my Vimberg Tonda speakers because I know they’re made by a company with strong engineering skills, and because I’ve seen their superb measurements as supplied by the manufacturer. The Tonda is a three-way floorstander that has three 8” woofers, a 6.5” midrange, and a 1.18” tweeter. 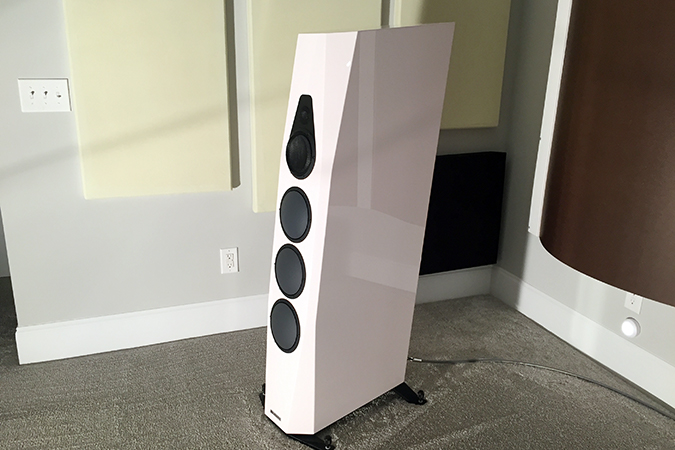 I took measurements with a Behringer ECM8000 measurement condenser microphone placed at my seated ear height at nine spots on a 20” radius at and around the listening position (averaged). The ECM8000 was used with an MXL Mic Mate XLR-to-USB microphone adapter plugged into my Apple MacBook Pro laptop running the FuzzMeasure acoustic-measurement software. The frequency-response graph (20Hz to 40kHz, 1/6th-octave smoothing) below shows a remarkably neutral response throughout the audioband.

I also wanted to illustrate just how important good room acoustics are to the reviewer, by showing you the averaged in-room tweeter responses of two different speakers in my new room. The EgglestonWorks Kiva has a 1.38” soft-dome tweeter from SEAS; the Monitor Audio Studio has an MPD tweeter of their own design. I used both pairs of speakers with the Luxman L-509X integrated amplifier (also reviewed this month) before I measured either speaker. As you can conclude by reading that review, my listening impressions of the L-509X, as paired with both speakers, broadly agree with what you’d expect from looking at the graphs (1kHz to 40kHz, 1/12th-octave smoothing). 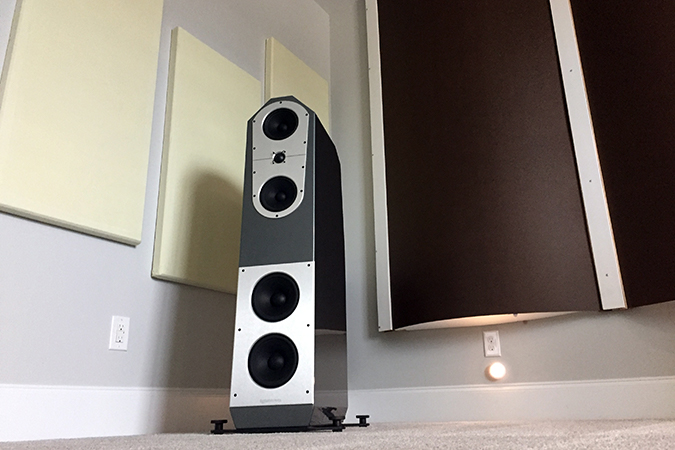 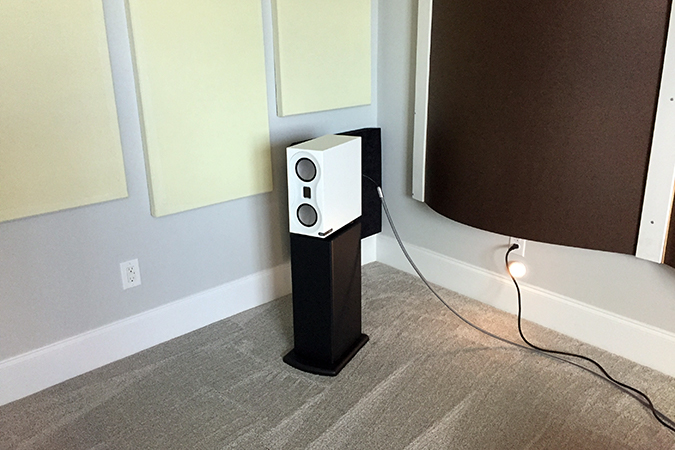 The Kiva is down about 12dB at 18kHz, whereas the Studio’s output remains nearly flat to that frequency. Depending on associated equipment, the music played, and the listener’s preference, the Studio might sound bright in some circumstances, nicely detailed in others; conversely, the Kiva might sound laid-back or well balanced, depending on those same variables. (Interestingly, in the highs, the Kiva response closely approximates the Harman curve -- the FR balance that Harman International has found that most listeners prefer in blind tests of speakers.) Horses for courses.

The takeaway for me is that I now have a listening room that gives me a clear window on just such differences as these, and more. Anyone who seriously auditions or reviews audio gear needs such a room to properly drill down into the nuances of sound that make high-end audio so interesting and musically relevant.

In short, I now have that again. Time to get to work.