If you’re a vinyl lover and a jazz fan, this is a great time to be alive. Blue Note Records has its Tone Poet and Classic Vinyl series, while Acoustic Sounds and Verve Records are collaborating to reissue titles from Verve, Impulse! Records, and other labels held by Universal Music Enterprises that don’t fall under the Blue Note umbrella. I’ve covered quite a few releases from all three reissue series here, and I had been planning to look elsewhere this month to mix things up until I played Katanga!, a Tone Poet reissue of a 1963 Pacific Jazz session co-led by Curtis Amy and Dupree Bolton.

Saxophonist Curtis Amy had a long career in music, appearing on jazz albums by Dizzy Gillespie and Gerald Wilson, among others, and leading Ray Charles’s band for three years. He played on rock and pop music sessions with the Doors and Carole King (he’s a soloist on King’s breakthrough 1971 album, Tapestry), and with Motown singers Marvin Gaye and Smokey Robinson. He led ten sessions in his lifetime, nearly all of them during the 1960s, mostly for Pacific Jazz.

In contrast, trumpeter Dupree Bolton recorded very little. He appeared on The Fox, a 1959 Harold Land recording, and on Katanga! A posthumous release, Fireball, collected work from sessions in 1963 and 1980, and appeared in 2009, 16 years after Bolton’s death in 1993. Katanga! is worth hearing because of the inspired level of playing by all the musicians involved. It is precious because we have so few examples on record of Bolton, who showed every possibility of becoming an important and influential jazz musician. 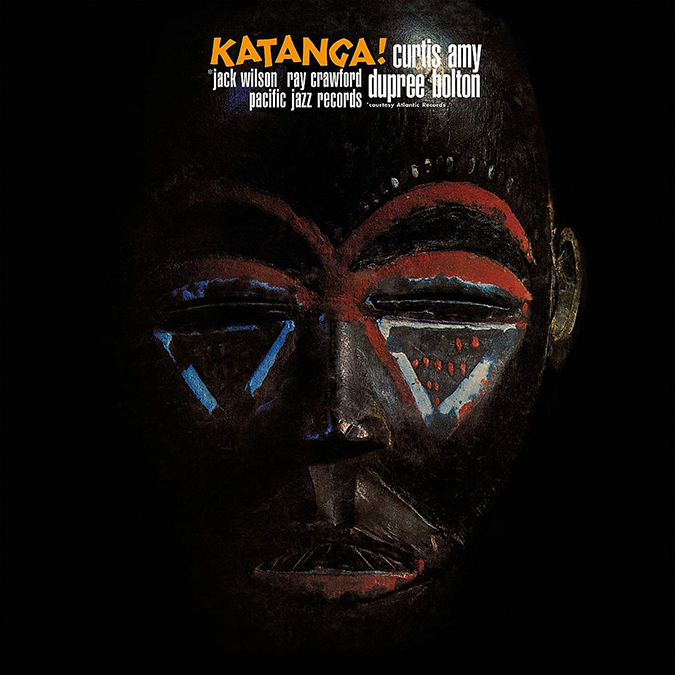 Although Katanga! was a Pacific Jazz release, recorded in Los Angeles, it stands confidently beside the East Coast hard-bop sound that Blue Note had been documenting since the mid-1950s. Bolton’s “Katanga” opens the album with a blast of speed and energy, and the players remain firm and resolute during the track’s three minutes. Bolton’s trumpet solo is swift and clearly stated, and not only does his playing remain intense and dynamic, but his ideas build logically while being passionately stated.

Amy’s sax solo is brief but powerful and confident. Pianist Jack Wilson is hard-swinging and bluesy, and maintains his cool when trading riffs with Amy and Bolton near the end of the track. Drummer Doug Sides is quick and agile. Bassist Victor Gaskin never falters as his swift and inventive lines dart around the other players in this fast-moving tune. Guitarist Ray Crawford plays in support of the rest of the group, comping behind the soloists and filling out the arrangement. The ease with which the musicians play this difficult tune pulled me into the album, eager to hear more.

I wanted to be able to compare this new pressing sonically with other available releases, and discovered Katanga! was included in a 2003 Mosaic Records CD compilation of Amy’s Pacific Jazz recordings. I borrowed a copy of the set, which was part of the label’s Mosaic Select series. Ron McMaster handled the remastering, and I found his transfer of the music to CD to be very good, but Kevin Gray’s work on the Tone Poet LP reissue, working with producer Joe Harley, fleshed out the recording and gave it more life.

Gray added some air around the instruments and nudged the soundstage forward. I noticed immediately that the solos on “Katanga” were better defined and out further in the room on the vinyl. I could hear Bolton’s impressive command of the trumpet in greater relief, especially during complex legato passages. Gaskin’s bass came across well on the Mosaic CD, but Gray has given it a bigger, more impressive sound on the LP, so it punched through powerfully throughout the album. The low notes were especially hard-hitting. Sides’s snare drum rang out more strikingly on the vinyl, and his ride cymbal had more edge and less decay.

When I moved on to “Lonely Woman,” Amy’s blues- and gospel-drenched composition that features him on soprano sax, I was immediately struck by how much further this pressing brought me into the studio with the musicians. On the opening of the song, and throughout, I could hear the structure of Crawford’s guitar chords more fully. This pressing also brought his solo out into the open so that I could hear the distinctive tone of Crawford’s hollow-body guitar. When I switched from the LP to the CD, the sound of the guitar seemed to flatten against the wall. 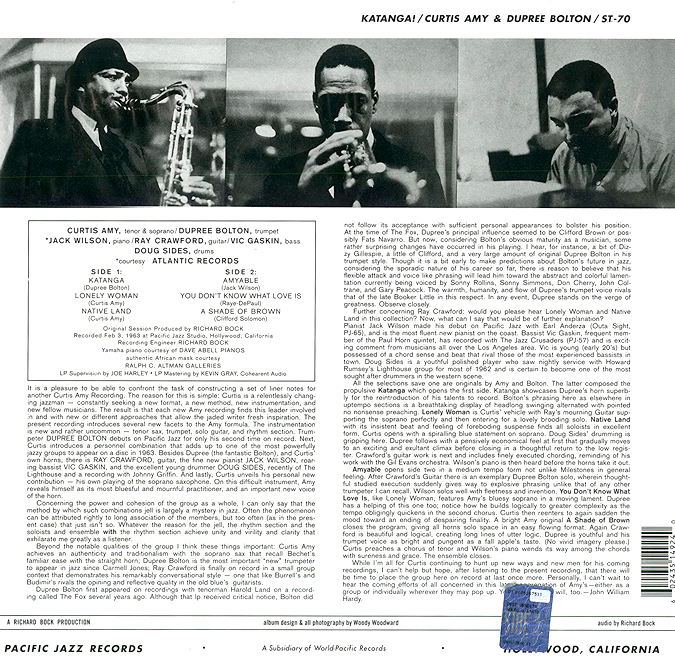 Amy’s solo has also been more precisely rendered on the LP, and further separated from the other instruments. Gray gave it a more exact placement, out into the listening room—I could hear each note, and the breath and effort Amy used to develop the solo. Wilson uses lower-register piano chords to create drama, and his dynamics were more exciting and impactful on the vinyl reissue.

When I turned to “You Don’t Know What Love Is,” a 1941 ballad written by Don Raye and Gene de Paul that has been covered by many jazz musicians and singers, I was struck by how much more clearly I could hear Crawford’s guitar pick as he strummed through the opening chords on the LP. I also found that Amy’s soprano sax had a less aggressive top end, a more forward position in the soundstage, and a more rounded tone.

One of the most impressive tracks on the album is an Amy composition, “Native Land.” Amy is on soprano again, and while he shows some influence from John Coltrane, especially during his improvisations, the composition and his playing stand on their own. Gray’s mastering brought out small details in the ensemble playing that helped make the music more compelling on the LP. Sides’s hi-hat accents had more body, and his ride cymbal had more splash. Crawford’s guitar chords were more fully presented, and Wilson’s piano chords were fuller, adding more foundation to the improvisations and more overall fullness to the song structure.

On this track, both horns sounded warmer and more realistic on the vinyl reissue. Amy’s soprano sax on the CD was a little edgier and more cutting, but on the LP his solos unfolded easily. On the CD, Bolton’s trumpet occasionally felt a little too bright. On the LP, I could hear the breath and effort Bolton put into his brilliantly developed solo, but the complex melody lines and ideas had more space to flow.

Gray has given all the instruments on Katanga! their due, making them audible while allowing them the space they need to play their proper role. On the CD, there were times when supporting instruments seemed to encroach on a soloist—for example, the drums during Bolton’s solo spot on “Native Land.” Gray let each note that Bolton played sing out clearly, while allowing us to hear every nuance of Sides’s drum accents as he supports and emphasizes Bolton’s ideas without getting in his way. 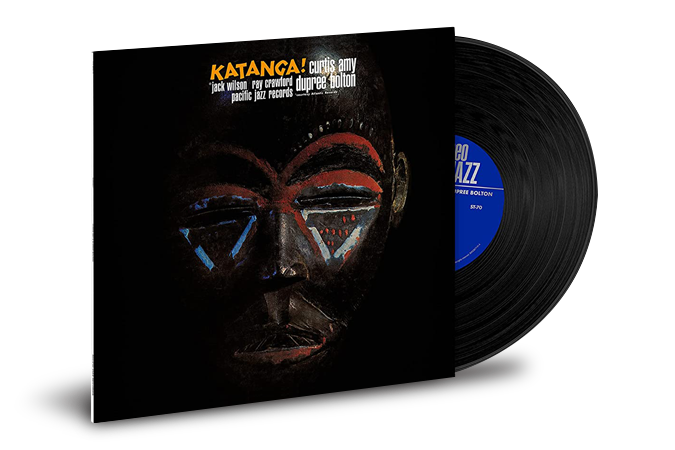 The 180-gram LP was pressed at the RTI pressing plant in Camarillo, California, to the usual Tone Poet standard. On my copy, the surfaces were absolutely quiet and presented “black” backgrounds that let the music shine. The cover, in a departure from other Tone Poet releases, isn’t a gatefold, but reproduces the original color front photo beautifully on high-gloss, tipped-on artwork. The black-and-white photos and original liner notes on the rear are cleanly printed. A paper insert inside the cover contains informative new liner notes, including biographical information, written by jazz critic Thomas Conrad.

While I was impressed with how good this reissue of Katanga! sounded, I was especially pleased that this hard-to-find recording is back in print. As Conrad points out in his liner notes, the Tone Poet series sets sonic excellence as a goal, but it also rescues musicians like Dupree Bolton from obscurity, pulling them back “from the shadows of history.” I can’t say Katanga! was an album I had on my list of jazz recordings that I wanted to own. It turns out that it should have been, and it should be on your list, too.