Art Blakey and the Jazz Messengers: "First Flight to Tokyo: The Lost 1961 Recordings"

Don Was, president of Blue Note Records, penned the short introductory essay for the booklet that accompanies First Flight to Tokyo: The Lost 1961 Recordings, a newly released set of live recordings by Art Blakey and the Jazz Messengers. Was describes Blakey’s importance to Blue Note, both as band leader and accompanist, and goes on to praise his focus and inspiration, which drove the musicians he played with to do their best.

“Thus, it was an irony of tragic proportions,” Was writes, “that this maestro of America’s greatest indigenous art form was relegated to performing in little jazz bars.” He is describing conditions for many jazz musicians in the United States in the early 1960s, long after the peak of the genre’s popularity in the swing era. By contrast, jazz musicians were revered in Japan at that time, and Tokyo’s Art Friends Association arranged a 1961 tour of the country by Art Blakey and the Jazz Messengers. On January 1, the group landed in Tokyo and was greeted with cheers and floral tributes at the airport by enthusiastic jazz lovers.

The two-week tour included stops in Osaka and Kyoto, bookended by appearances in Tokyo. When producer Zev Feldman learned that tapes from the final two-day stand at Hibiya Public Hall in Tokyo had been found, he arranged for Blue Note to release them. Feldman and David Weiss coproduced the album, and brought the tapes to Bernie Grundman for mastering. 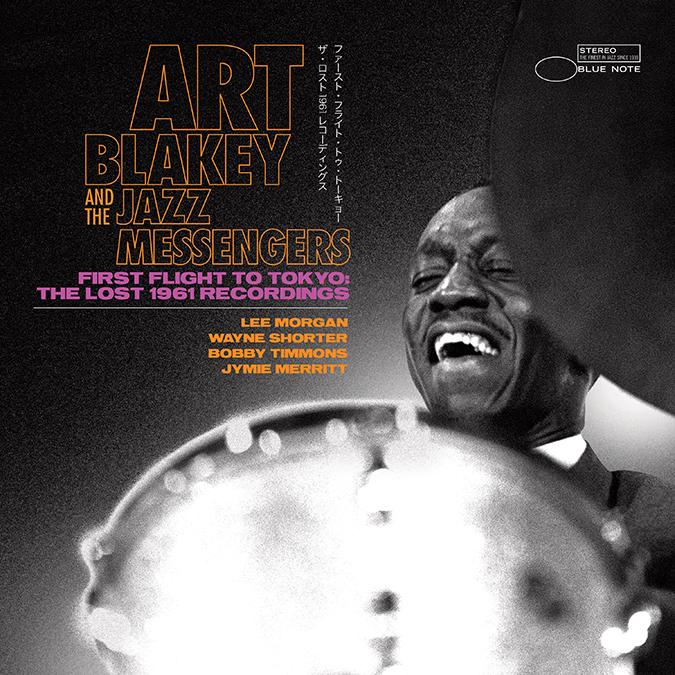 Blue Note has released the resulting album as a two-CD set, a two-LP set, and as a digital download in MP3 and high-resolution (24-bit/96kHz) FLAC and WAV formats. I’ll be reviewing the two-LP set here.

Charlie Parker’s 1945 composition “Now’s the Time” takes up all of side 1, and Blakey opens the tune with a five-minute tour de force on drums. His drumming sounds muscular and I could clearly hear the tones of each individual drum on the recording; Blakey’s combination of power and finesse registers well. Bobby Timmons enters on piano, with bassist Jymie Merritt playing behind him, and, after a few bars, saxophonist Wayne Shorter and trumpeter Lee Morgan begin playing the song’s melodic theme. It takes 50 seconds for the bass to come up in the recording, just after Shorter begins his solo, and the music at that point coheres.

Shorter’s playing is full of fire and vigor, and then Morgan takes his turn. He plays a carefully developed solo that begins with a cool delivery and builds in intensity and passion. Timmons’s gospel-flavored feature swings mightily, with Blakey and Merritt shadowing him. The full band returns to trade fours at the end before Blakey’s second spotlight rouses the audience and the band brings the song to a close. The entire performance runs for just over 22 minutes, and the energy and creativity of the players never flags.

Timmons’s “Moanin’” gets a generous round of applause during its introductory chords. Morgan again plays at a high level of inspiration and inventiveness, and Shorter provides a contrast with a series of edgy, jagged lines that show John Coltrane’s influence and, at the same time, Shorter’s determination to use that example to carve out his own identity. Shorter demonstrates the versatility he shows throughout the performances here, from soulful hard bop on “Blues March” to the almost avant-garde excursions on other tunes, including “Now’s the Time.”

Shorter’s outing on Timmons’s “Dat Dere” begins with a swinging bebop approach before edging into the new, challenging jazz that he would soon be developing with Miles Davis. Timmons himself takes a terrific, bluesy turn on the track, and his comping behind the other musicians is engaging and thoughtful. The Jazz Messengers do a hot version of “A Night in Tunisia,” a Dizzy Gillespie standard that they had recorded just a few months earlier. Their live attack on the tune may be even more energetic than the studio version.

The easy, spontaneous interaction among the five musicians is often breathtaking. During Shorter’s solo on “Blues March,” Morgan injects a high-toned series of notes that punctuate the intensity of Shorter’s playing without getting in the way. Blakey is a force of nature, energetic and powerful, but always providing subtle support and counterpoint to the other musicians. 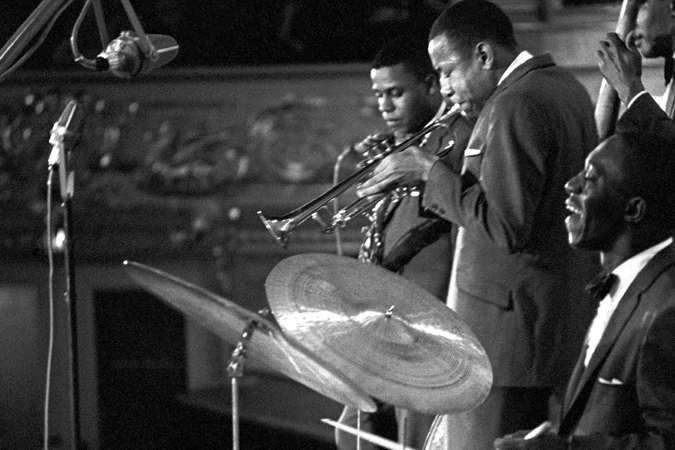 There’s a lot of live energy and atmosphere on First Flight to Tokyo, and the mono recording is good, but not exceptional. The original recording engineer, Tetsuo Yasuda, takes some time to dial in Merritt’s bass, and it could be better defined. Blakey’s drums are a touch soft at the edges, but I could hear his technique and changes in dynamics. The other three instruments come through in good detail.

I compared a CD-quality download with the LP. Bernie Grundman mastered both, so they’re almost indistinguishable sonically. I found the LP to have slightly better low-frequency definition, which helped Merritt’s bass. The CD had a livelier top end, which captured more of the ambiance of Hibiya Public Hall and some of Blakey’s encouragement of the other musicians. I felt the LP was more balanced and cohesive, but not by a wide mark.

According to a liner note by Ryuichiro Nemoto, a production coordinator for this release, the source tapes were likely from the matinee and evening performances on January 14. Feldman sequenced the tracks, which include two performances of “Now’s the Time.” The second version, on side 4 of the LP set, provides an interesting contrast with the longer take that opens the album.

The packaging is absolutely first rate. The 16-page booklet contains extensive liner notes and photos. Feldman writes about the original tapes and how they were prepared for release, Bob Blumenthal provides historical perspective, and Blakey’s son Takashi Blakey writes of his father’s love of Japan. Shorter, the only surviving member of the band, reminisces about his time with Blakey, and many others offer tributes to the great drummer and band leader. 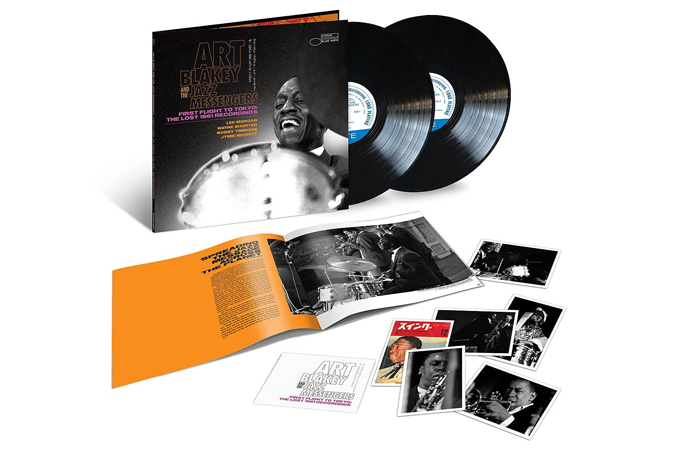 The cover is standard-weight cardboard, but it’s laminated and looks great. The gatefold is loaded with photos of the band and the layout is very attractive. The package includes an envelope that contains six postcards featuring photos of each band member and a reproduction of the cover of Swing Journal, a Japanese jazz magazine. The two 180-gram LPs were pressed by RTI—my copies were absolutely quiet and had no problems with dishing or warpage. At around $40, this deluxe set is quite affordable, especially when considering the beauty of the packaging.

Blumenthal’s notes mention another live recording from this 1961 Japanese tour, from a concert at a different Tokyo venue on January 2. That performance has been available since the early 1980s on various labels on vinyl, and, more recently, on CD. Both performances are worth having, but this latest release has a slight edge, sonically. The later appearance captured on First Flight to Tokyo was the culmination of two weeks of playing to adoring audiences, and the quintet are brave, confident, and exquisitely responsive to one another.

There are many live recordings in Blakey’s discography, including Meet You at the Jazz Corner of the World, a Blue Note release of a September 1960 performance by this same lineup. Every version of that album I’ve heard portrayed the band in fine form, but had sonic issues. This one sounds much better, and I think the band’s performance is even more dialed-in. First Flight to Tokyo: The Lost 1961 Recordings is a reminder that this lineup of Art Blakey’s Jazz Messengers was essential jazz.