I became a fan of jazz guitarist Grant Green in the early 1990s, but copies of his recordings on vinyl were hard to find at that time. I tracked down nearly all his Blue Note sessions on CD, including his outings as a sideman, but for a long time I only had a handful on LP. Over the last several years, Blue Note has done a fine job of bringing Green’s recordings back into circulation on vinyl through its 75th Anniversary, Tone Poet, and Classic Vinyl series.

The latest Green album to see reissue on the Tone Poet series is Feelin’ the Spirit, a 1963 album that features Green on guitar, Herbie Hancock on piano, Butch Warren on bass, and Billy Higgins on drums, augmented by Garvin Masseaux on tambourine. As the title suggests, Green’s quartet interprets five songs from the African-American gospel tradition, and the result is one of the guitarist’s strongest albums.

I have a 1987 CD release of Feelin’ the Spirit, mastered by Ron McMaster. I also have a 1973 vinyl reissue of the album, mastered by Ralph Eck. The Tone Poet pressing was mastered by Kevin Gray, in collaboration with Blue Note producer Joe Harley. 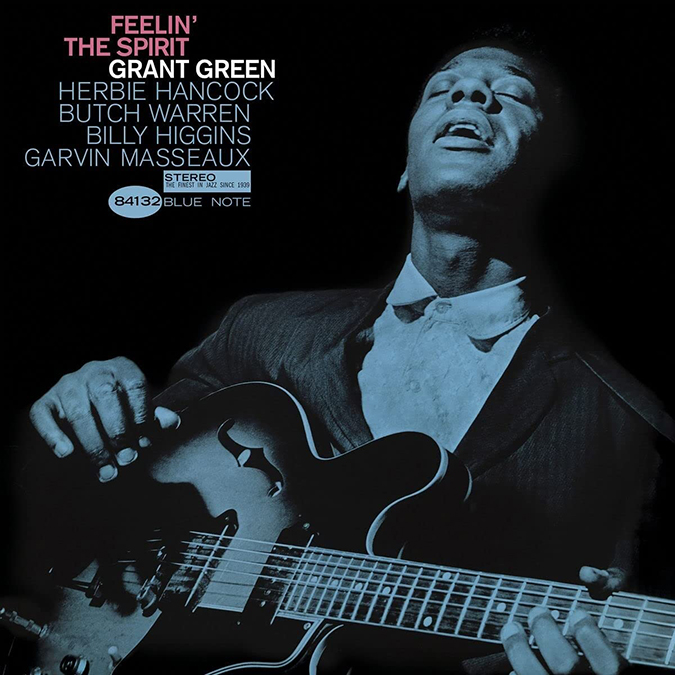 The origins of “Just a Closer Walk with Thee” go back in some form to the late 19th century. Gospel composer Kenneth Morris published a version of the song in 1940 that has since become a standard, covered by everyone from Patsy Cline to LaVern Baker. Green and company play it at a moderately quick pace, with Hancock’s gospel-flavored piano setting just the right background for Green’s statement of the melody.

Played back through my system, the CD sounded reserved compared to the 1973 pressing, but more spacious and open. On the 1973 LP, bass notes sounded firmer and Green’s guitar had a sharper edge; but the music played out on a narrower soundstage, and the instruments were too forward. The Tone Poet pressing had the same openness as the CD, but with far more detail. It was easier to follow individual notes on Green’s guitar during long improvisations, and Hancock’s accompaniment registered more clearly than on either of the other copies I played. His piano sounded slightly reserved on the CD, and lacked nuance on the 1973 pressing.

Green plays the opening theme of “Nobody Knows the Trouble I’ve Seen” with Hancock’s piano chords behind him. Warren uses a bow to play sustained bass lines in support. On the Tone Poet pressing, the bowing was more textured than on the other two copies of the album, and the bass was more prominent. Hancock’s piano also had a stronger presence. Throughout the song—and on the rest of the album—his accompaniment felt more responsive to the dynamics of Green’s playing. When Higgins joins them, his brush strokes on the snare were more audible, and his accents at various points were more pronounced.

Masseaux’s tambourine on the track was mixed into the background on the original recording. On the 1973 LP, it was a subtle addition to the music but sounded tonally odd—at once too bright and too thin. It sounded fine but reserved on the CD. On the Tone Poet pressing, it was both audible and a significant addition to the music throughout the album without overstepping its supporting role.

Green’s solo on “Nobody Knows the Trouble I’ve Seen” is a fine example of the way he varied the volume and force of his playing to bring his ideas across. On the 1973 LP, a too-aggressive approach to the mastering lost that aspect of his playing. The CD conveyed Green’s expert touch, but the Tone Poet did the best job of letting me hear the solos develop and grow in intensity. Triplets were clean and focused on the Tone Poet pressing, while on CD they occasionally seemed to lose their momentum and clarity.

“Sometimes I Feel like a Motherless Child,” like the other tunes mentioned here, can trace its roots to the 19th century, and has been extensively recorded. Hancock’s training and background were in classical piano and, later, in jazz, but he has an impressive command of gospel piano. He opens the track with a series of chords that give the tune its spiritual backbone, accompanied by Warren and Higgins.

When I compared the 1973 pressing to the later CD, I was again struck by the earlier LP’s somewhat aggressive presentation of the music. Hancock’s piano was in danger of overpowering Green’s guitar lines, which sounded too bright and edgy. The CD allowed more room for each instrument to ring out clearly. The Tone Poet pressing had the same spacious presentation, but the instruments had a more immediate, live sound. Green’s guitar sounded pleasing on the CD, but his distinctive tone and attack were even more apparent on the Tone Poet reissue. Warren’s bass also had an impressive fullness on the new release that gave the track a strong foundation. 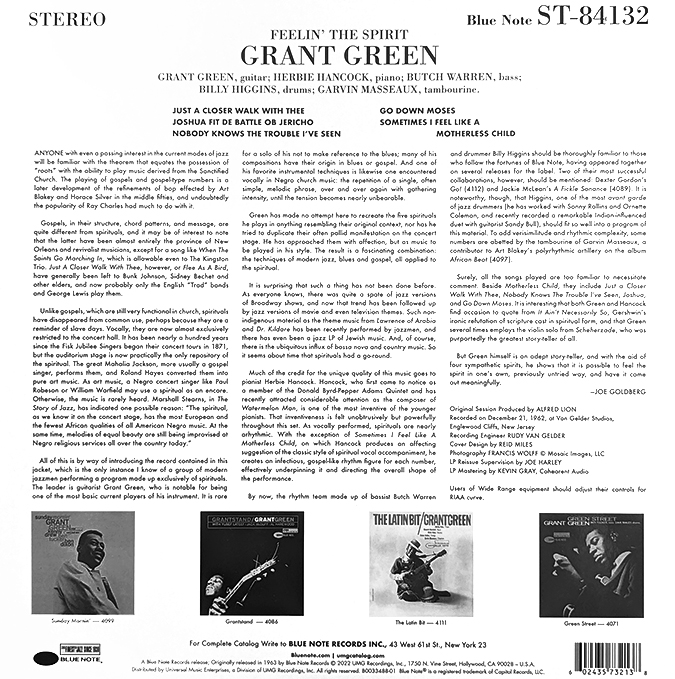 On the earlier pressing, Higgins’s hi-hat came through on “Sometimes I Feel like a Motherless Child,” but his accents on the drums were buried. They were moved up a bit on the CD, but on the Tone Poet pressing, Higgins’s light touch was retained while allowing me to hear his wonderful choices in support of the other musicians. During solos by Green and Hancock, the new pressing let me hear how Higgins was reserved in his support but used firmer and louder emphasis when it was called for.

Throughout the album, Hancock’s solos sounded warmer and harmonically richer on the Tone Poet pressing. In addition, Warren’s bass sounded more impressive, providing a stronger foundation than on the other two versions I own. Gray and Harley have brought the bass forward without pushing it too hard or changing the overall flow of the music. It pulls the session together.

The Tone Poet LPs are pressed by Record Technology Incorporated, based in Camarillo, California. RTI is among the leading pressing plants in the world, and my copy of Feelin’ the Spirit arrived quiet, flat, and centered. The heavyweight gatefold cover, by Stoughton Printing, has laminated, tipped-on artwork featuring photos from the original session.

Feelin’ the Spirit is the fourth Grant Green title released in the Tone Poet series. Earlier this year, Blue Note reissued The Latin Bit, a 1962 session by the guitarist. Previous Green reissues in the series were Born to Be Blue (recorded in 1961 and 1962, released in 1985, and reissued on Tone Poet in 2019) and Nigeria (recorded 1962, released 1980, Tone Poet reissue in 2020). All are essential purchases for Grant Green fans: definitive editions of some the best guitar-playing in jazz.