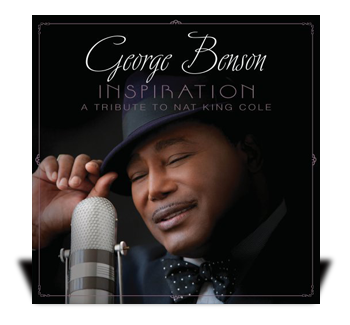 When Nat King Cole, Frank Sinatra, Perry Como, and others were alive and working, big-band vocal albums like this one used to be released with great regularity. But only a choice few were so finely crafted. George Benson is revered as a guitarist, but he also sings, and this album is evidence that he should be highly regarded for that talent as well.

Benson has been touring over the past four years, presenting concerts devoted to music made famous by Nat King Cole, and the studio recordings on Inspiration document that project. Benson sings with comfort, warmth, and ease; you’d never guess that he’s in his 71st year! He doesn’t imitate Cole directly, but every once in a while, in certain ranges, he resembles his inspiration a bit. He also occasionally resembles Johnny Mathis, but mostly he sounds like George Benson, and that’s plenty good.

After a mercifully short sample of Benson singing at age eight, track 2 gives us a hard-swinging version of Cole Porter’s “Just One of Those Things,” in which Benson scats, with a skill to be envied by all who try that difficult means of musical expression. It’s at this point that you realize that this is to be an album of big-band sounds. The Henry Mancini Institute Orchestra is on hand, conducted by arranger and pianist Randy Waldman. Five of the tracks use original arrangements by Nelson Riddle; the others are arranged in Riddle style by Waldman.

Nat Cole’s own “Straighten Up and Fly Right,” another hard swinger, comes near the end of the album; on the way to it we hear the more gently swinging “Unforgettable” (with trumpeter Wynton Marsalis), “Walkin’ My Baby Back Home,” and “Route 66.” Then there are the gorgeous ballads: “When I Fall in Love” (with singer Idina Menzel), “Nature Boy," “Smile,” “Too Young” (with singer Judith Hill), and “Mona Lisa.” Each is sung with impeccable phrasing, intonation, and enunciation. Class all the way.

Producers John Burke and Waldman have given us a sound that is totally appropriate: big and broad, with great warmth and adequate presence, it seems to roll out the proverbial “carpet” of sound -- a magic carpet at that. Riddle’s arrangements sound as lush as they did originally, and though the scoring is thick, the instruments never overwhelm the voices.

In recording a tribute to the great Nat King Cole, George Benson has created an album that listens well for 2013. I predict that it’ll be nominated for a Grammy Award.