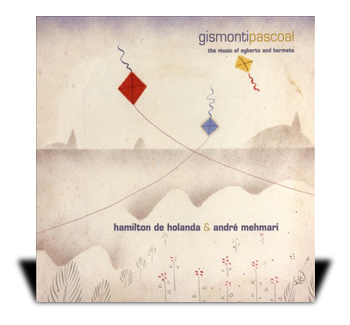 The mandolinist Hamilton de Holanda is a virtuoso who, like many other Brazilian jazz performers, incorporates his country’s folk-music traditions into his work. He has recorded some of my favorite music over the last few years, and I’m pleased to call attention to Gismontipascoal, a collaboration with pianist André Mehmari. The disc is a tribute to two of their countrymen, Egberto Gismonti and Hermeto Pascoal, who join them on one track each. The remaining tracks are duets that demonstrate the richness of the compositions and the talents of the musicians.

Gismonti and Pascoal are composers and instrumentalists who are revered in their homeland and well regarded by musicians throughout the world. Gismonti has recorded many albums for ECM, including three with Charlie Haden and Jan Garbarek. Pascoal has appeared with Miles Davis, Duke Pearson, and Donald Byrd, among others, in addition to leading many of his own sessions. Both composers show a marked jazz influence, but also incorporate Brazilian folk and world-music traditions into their work.

Mehmari and de Holanda co-wrote the title track, which contains elements of the work of both of the composers they’re celebrating, and opens the disc in a calm manner that shows the two players in fine form. They return to the tune toward the end of album in a more spirited version, “Gismontipascoal -- Party,” in which their complex interplay is an impressive display of instrumental prowess that doesn’t lose sight of the melody or descend into mere showiness.

Mehmari and de Holanda play Gismonti’s delicately beautiful “Palhaço (Clown)” with stately elegance. Mehmari’s chords behind de Holanda’s solos create a subtle drama that builds to a dramatic conclusion that doesn’t overpower the tune’s emotional and harmonic complexity. “Lôro (Blond),” another Gismonti composition, features wordless vocals from de Holanda and Mehmari, and dazzling playing that balances passages of great speed and dexterity against more contemplative sections. De Holanda’s “O Farol que nos Guia (A Beacon to Guide Us)” is his most overt tribute to Gismonti, while his “Menino Hermeto (Boy Hermeto)” evokes the music of its namesake.

Pascoal’s “Música das Nuvens e do Chão (Music from the Clouds and the Ground)” clocks in at nearly 15 minutes and includes the composer on Fender Rhodes, percussion, and an unusual wordless vocal. Mehmari’s chording recalls Bill Evans, but his solos have a quick, percussive attack that Evans rarely displayed. De Holanda brings a lyrical fire to his solos, and Pascoal plays a terrific, uncredited solo on flute. The song veers into free jazz, but retains its focus over its considerable length.

De Holanda and Mehmari play with conviction and energy on Gismontipascoal, and most tracks offer dazzling displays of speed and invention. Despite the fireworks the two generate, the music remains light and airy. Both musicians are responsive to and supportive of each other, and both show a clear respect for the demands of the songs by these important composers.

Mehmari recorded, mixed, and mastered Gismontipascoal; the sound is coherent and flowing. De Holanda’s mandolin has the warm openness of a vintage instrument, and Mehmari’s piano rings out without dominating the recording. Beautiful music, beautifully recorded.