Anne Ducros: "Either Way: From Marilyn to Ella" 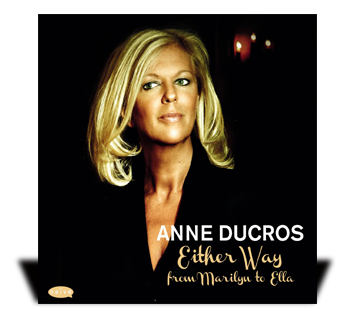 The subtitle of this latest album from French jazz singer Anne Ducros is intriguing. From Marilyn to Ella? What’s the connection?

In 1955, Ella Fitzgerald was not allowed to play the prestigious Mocambo club in Hollywood because of her race. Enter Marilyn Monroe. Fitzgerald told it this way: "I owe Marilyn Monroe a real debt. . . . [S]he personally called the owner of the Mocambo, and told him she wanted me booked immediately, and if he would do it, she would take a front table every night. She told him -- and it was true, due to Marilyn’s superstar status -- that the press would go wild. The owner said yes, and Marilyn was there, front table, every night. The press went overboard. After that, I never had to play a small jazz club again. She was an unusual woman -- a little ahead of her times. And she didn’t know it."

Monroe is said to have studied Fitzgerald’s recordings in detail, and for it became a better singer herself. If you Google their names, you can find some nifty photos of them together.

Although she sings like neither, Anne Ducros sails through this tribute album of songs associated with Fitzgerald and Monroe. For Monroe we find “My Heart Belongs to Daddy” and “Diamonds are the Girl’s Best Friends.” Ella Fitzgerald sang almost every song in the Great American Songbook, and there’s a long string of them here, including “Summertime,” “Spring Can Really Hang You Up the Most,” “A Fine Romance,” “Thou Swell,” and “Dindi.”

Ducros, from northern France, has a warm, expressive voice with which she has created her own personal style. Her interpretations are often unusual -- she sings “My Heart Belongs to Daddy” as a slow-burning torch song rather than in the more usual flip, upbeat style. She stamps every song on this disc with her own personality, creating a new impression of each rather than replicating what has gone before. Some may find this difficult going, but if you can stick with it, there are great riches here.

My favorite flight of Ducros’s fancy is “Laura,” which here is given an almost supernatural treatment. Ducros sings earthily, but Emmanuel Bex, on Hammond organ, vocoder, and vocals, adds an eerie element to this song that had never occurred to me. It’s fresh and exciting.

The sound is excellent, clean and neat, with good balance between Ducros and the instruments, and enough warmth to keep it from becoming antiseptic.

If you’d like to reflect on the courage and talent of Ella Fitzgerald and Marilyn Monroe while listening to new interpretations of these old songs that give them greater dimension and depth, this disc could be your ticket.