Written by Joseph Taylor
Category: Recording of the Month
Created: 01 May 2015

I’ve written about bandolim (ten-string mandolin) player Hamilton de Holanda before, and when I get new music from him and other Brazilian musicians, I am reminded of how vibrant and varied the music scene there is. I have discs by de Holanda in small group settings, as well as in duets, and he never fails to impress me with his skills and the emotional conviction that drives his playing. 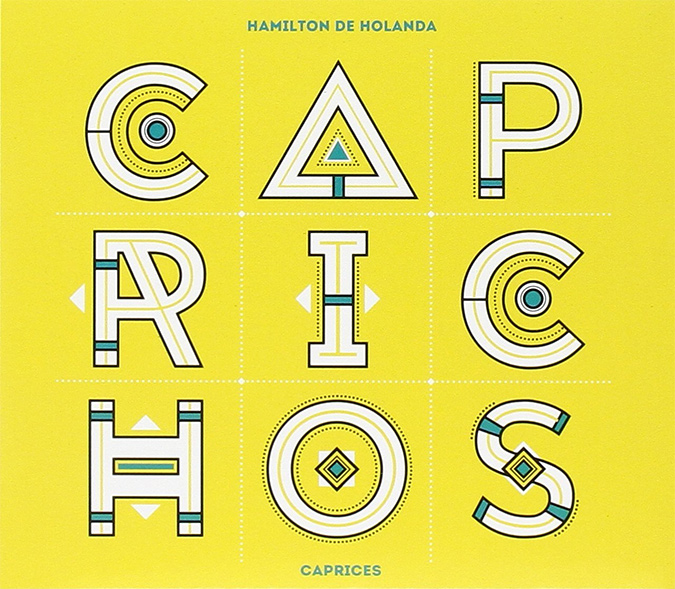 Caprichos grew out of his desire to “. . . create a project that would combine my work as a composer with the years I spent developing, without being aware of it, a technique for the ten-string mandolin.” According to his liner notes, de Holanda has created an accompanying website for Caprichos that contains information and written scores to help students understand and play the 24 compositions that comprise the two-disc set.

Don’t let what sounds like it could be a strictly academic enterprise scare you away. De Holanda has written songs that he and the other musicians on the disc bring their full passion and skill to, and the songs never sound like exercises for aspiring players. The solo pieces bring the listener close enough to de Holanda to be impressed by his abilities, and the recording is so detailed you can hear his picking technique, but the beauty and complexity of the compositions will bring you back to them.

Although seven of the selections are solo performances, the majority feature de Holanda with other players. Bassist Guto Wirtti and percussionist Thiago da Serrinha join him on “Venezuelan Caprice,” which shows a pronounced Brazilian folk music influence. Da Serrinha’s percussion gives the piece a driving energy, and Wirtti’s bass playing weaves around in counterpoint to de Holanda’s swirling melodies.

Da Serrinha and bassist André Vasconcellos are on hand for seven of the titles, and those tracks are most effective because da Serrinha contributes so much passion and so many good ideas. The brushed textures on “Raphael Caprice” drive the piece rhythmically, but they also give it the sonic foundation it needs. 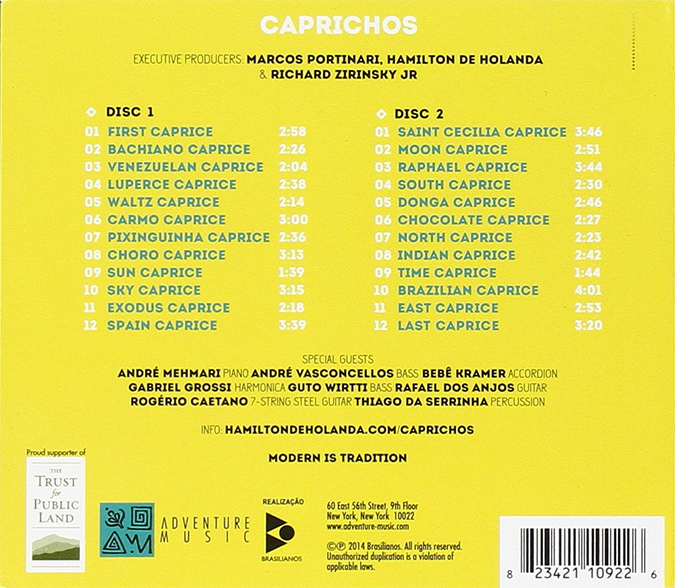 De Holanda has chosen his musicians wisely throughout Caprichos. Alessandro Kramer appears on a single tune, “Waltz Caprice (Caprico de Valsa),” but his interaction with the mandolinist is intuitive and gripping. Gabriel Grossi’s harmonica playing on “Sky Caprice (Capricho de Céu)” is lighthearted and magical, as is the tune. As bassists, Vasconcellos and Wirtti help keep de Holanda’s wonderful flights of the imagination centered and focused.

These caprices show the full range of de Holanda’s skills as a player and writer. The tracks are short, none over four minutes, and the 24 tracks could have fit on one disc, but having them divided between two gives the listener time to pause and absorb the huge outpouring of de Holanda’s inventiveness and versatility. The sound throughout is warmly inviting and intimate, as if the players have come to your home for a special concert.