It’s been five years since the last Radiohead album, The King of Limbs, during which time singer Thom Yorke has released a solo album, Tomorrow’s Modern Boxes (2014), and guitarist Jonny Greenwood has composed the scores for three films. It’s hard to think of a band that’s gone in more unexpected directions during its career, whether musically or in the ways it’s made that music available. Radiohead released their newest, A Moon Shaped Pool, as a digital download on May 8, and on physical media on June 17, following a pattern established with In Rainbows (2007) and The King of Limbs (2011).

Radiohead is a favorite with intellectuals -- how many rock bands are covered in The New Yorker or The Atlantic Monthly? I’ve found some of their records, especially Hail to the Thief and The King of Limbs, to be too earnest, too carefully thought out; but I was surprised at how well even they bear up under repeated listens. Even for the most ardent fan, a new Radiohead album often requires a period of adjustment -- the biggest surprise about A Moon Shaped Pool is that it is immediately approachable while still being sonically dense and musically challenging. 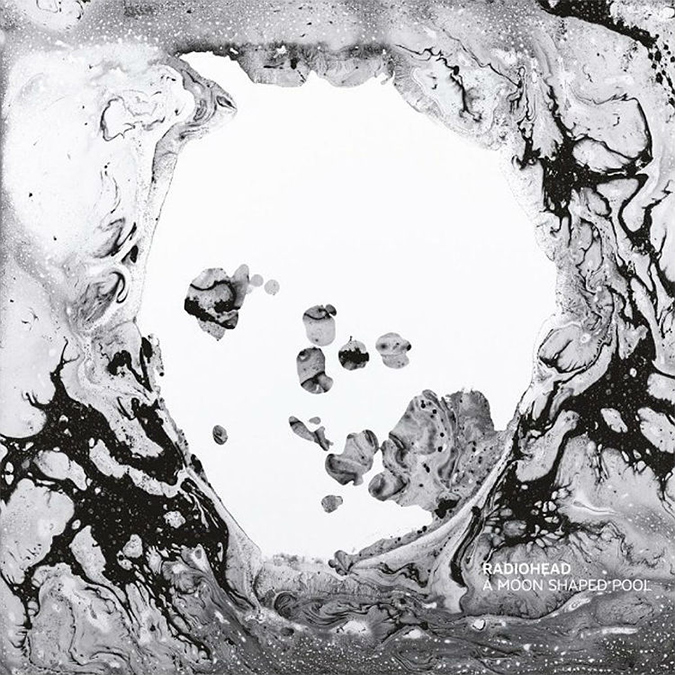 According to Newsweek, the album’s first single, “Burn the Witch,” has been around for a while. The title appeared in the artwork on the inner spread of Hail to the Thief, and Radiohead had worked on the song as early as 2000, in the recording sessions for Kid A. Greenwood’s percussive string arrangement reflects the song’s urgency as it warns of the dangers of mass hysteria. Like the best protest songs, “Burn the Witch” has a melody that’s easy to remember, and the strings give it the thrumming intensity of Johnny Ramone’s driving guitar playing.

At nearly six-and-a-half minutes, “Daydreaming” is the longest track -- it builds slowly, an acoustic piano at its center, as electronic sounds fill out the arrangement. Yorke doesn’t begin singing until 1:20 into the song, whose ethereal beauty carries a sad message. Yorke’s acoustic guitar gently begins “Desert Island Disk”; he sounds hopeful in a song that, for this band, is unusually upbeat.

String arrangements and keyboard washes dominate A Moon Shaped Pool, but drummer Phil Selway and bassist Colin Greenwood set up the ominous beginning of “Ful Stop,” which halfway through switches, almost imperceptibly, to something more bouncy but, still, distinctly uncheery. Themes of political turmoil, the effects of climate change, and failed romance run through A Moon Shaped Pool, with occasional glimpses of hope. It’s not a preachy album, but one made by people who are concerned about the world, and perhaps less sure of the solutions to its problems than they might once have been.

And there’s so much great music here -- from the deeply affecting string arrangement for “Glass Eyes” to the bubbling guitar lines and choral arrangement of “Identikit.” “Present Tense” has a bossa-nova beat and, like so many tracks on A Moon Shaped Pool, it builds, transforms, and retains a sense of beauty even in its most intense moments.

Nigel Godrich’s typically rich production puts Yorke’s voice in the front of the mix in holographic detail, and the layers of sonic detail grow more arresting with each hearing. Though carefully constructed, A Moon Shaped Pool doesn’t feel fussed over, as have many Radiohead albums since Kid A. Although the tracks are sequenced alphabetically by title, song flows naturally into song. It’s the best kind of pop recording: smart and heartfelt.