Norwegian jazz drummer Thomas Strønen has appeared on more than 60 albums in the last 20 years, in a variety of groups and settings. Three of those recordings are his own as leader and composer, including the newest, Lucus, his second outing for ECM. His previous release for the label, Time Is a Blind Guide (2015), featured 11 compositions he wrote for a unique septet that included two additional percussionists, a violinist, and a cellist.

Lucus reduces Time Is a Blind Guide to five players but retains Håkon Aase on violin, Lucy Railton on cello, and Ole Morten Vågan on double bass. The pianist this time is Ayumi Tanaka, who in 2011 moved to Norway from Japan to study and perform. Strønen has named the septet after the earlier album, and on Lucus he gives the musicians more room to improvise, instead of having written out the music, as on the previous disc.

“La Bella” begins Lucus on a somewhat contemplative note, the string players bowing in counterpoint as Tanaka plays chords behind them and Strønen adds emphasis as the music develops. The music is in some ways reminiscent of the minimalism of Philip Glass, but as the musicians react to each other it develops an emotional impact I often find missing from Glass’s work. 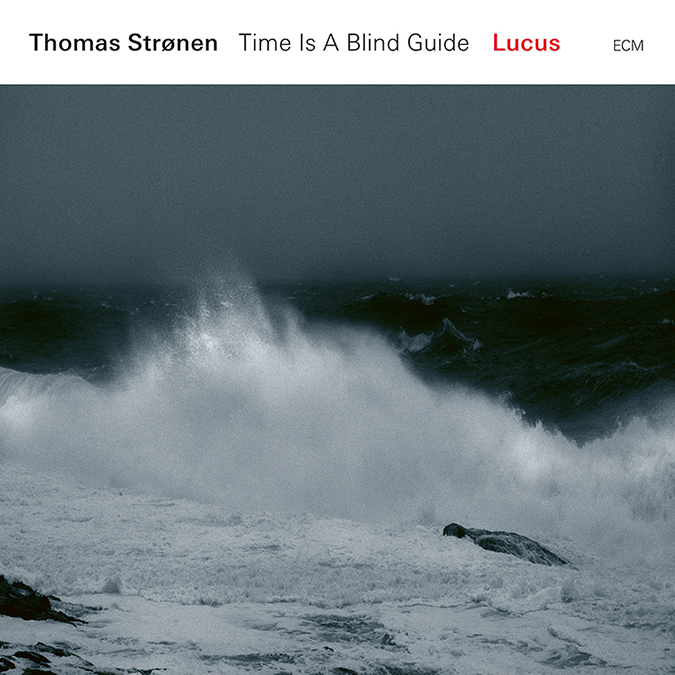 These pieces often increase in intensity, shifting in dynamics and emotion. “Friday” begins haltingly, Vågan and Strønen establishing a foundation as the other string players begin to build atmosphere, which intensifies before the quiet close. Aase’s violin gives “Release” a mournful quality, Railton’s cello supporting the emotional undercurrent, and Vågan sometimes bowing to add dark tones.

Tanaka brings firm harmonic structure to the title track, to which Strønen’s cymbal work and snare taps give rhythmic focus, Vågan filling in behind him and Tanaka as Railton and Aase develop the melodic theme. The longest track, “Fugitive Pieces,” in three sections, begins elegiacally, the three strings playing unaccompanied as they establish a sad, almost prayerful mood. Tanaka plays the second section solo, emphasizing the composition’s feeling of spiritual longing and tragedy. The strings and Strønen join her in the closing section, to bring the music to a moving conclusion.

“Baka” is percussive and dynamic, with an edgy, angular melody and harsh chords; Strønen’s aggressive drumming is the heartbeat of the piece. “Wednesday” lightens the mood with an upbeat melody played by Tanaka, Aase, and Railton, a skittering drum line from Strønen, and Vågan’s buoyant bass playing. “Tension” shows a Middle Eastern influence in the melodies, but Tanaka introduces a free-jazz element that Strønen and Vågan help her build on. 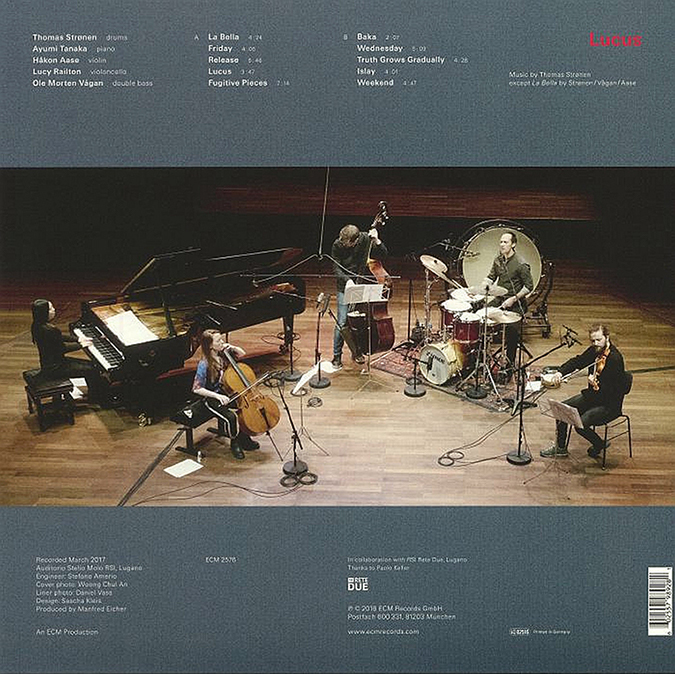 “Truth Grows Gradually” is another upbeat track, but even the more accessible compositions on Lucus offer something challenging to the ear -- a slight dissonance, a shift in time -- that keeps you paying close attention. Strønen often does as much to maintain a song’s emotional pitch as he does to keep things rhythmically grounded.

The drummer sets a solid beat in “Islay,” but he listens and plays as a composer throughout Lucus, often not playing at all if that’s what best serves the music. He enters the final track, “Weekend,” 45 seconds in, and his cymbal splashes and snare hits dart in and around the strings and piano. The piece segues into a more swinging, jazz-based ending, Strønen’s focus giving it drive and purpose.

The sound on Lucus is up to ECM’s usual standards -- clean, spacious, detailed. I found that the LP had more low-frequency energy than the CD, which gave Vågan’s low notes an impressively visceral fullness, and more force to Strønen’s playing when he hit a tom or the kick drum. I also felt that the vinyl presented the strings’ textures more realistically. But whether you listen on CD or vinyl, Lucus is an impressive balance of fragile beauty with moments of sadness and power. ECM continues to release music that asks jazz fans to broaden their definitions of the music.