Jazz pianist Mal Waldron moved from New York to Munich in 1967, and thereafter, until his death, in 2002, did most of his recording in Europe. He’d performed and recorded as a leader and sideman since the early 1950s, and had found that American -- especially African-American -- jazz musicians were treated and paid better across the Atlantic.

Waldron recorded Free at Last in November 1969 with two other players then based in Munich: Swiss double bassist Isla Eckinger, and American drummer Clarence Becton. Waldron wrote in the liner note that the album marked a departure for him: “[it] represents my meeting with free jazz.” In addition to being a notable album in Waldron’s discography, Free at Last marked the debut of what would soon become a successful and influential label for jazz and other musics. It was the very first release on Manfred Eicher’s Edition of Contemporary Music, better known as ECM.

To celebrate the 50th anniversaries of the album and of the label itself, ECM has released Free at Last: Extended Edition as a two-LP set and as a high-resolution digital download. The four new tracks comprise the second LP, which runs 28 minutes. Three are alternate takes, and the fourth is an unedited recording of “Willow Weep for Me,” which was shortened by 2:11 for the original LP release. 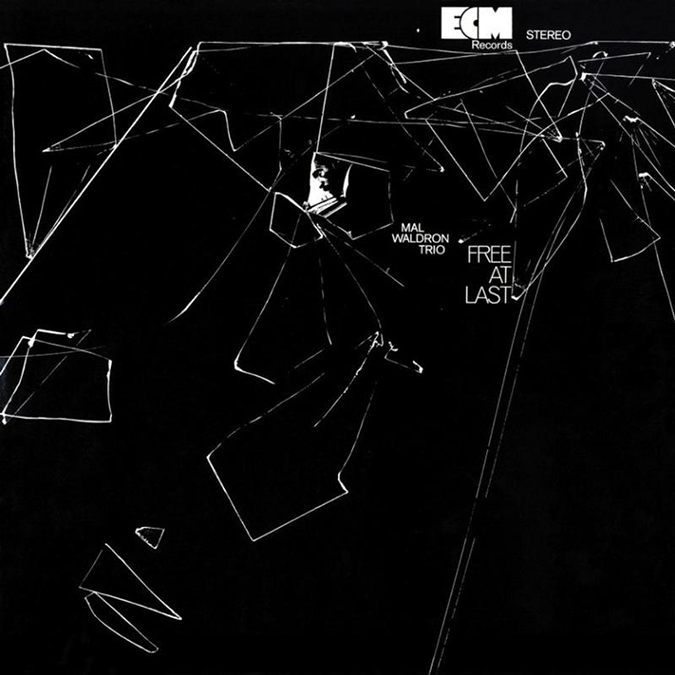 I compared the LP and hi-rez (24-bit/96kHz WAV) versions of the strongly rhythmic opening track, “Rat Now.” The differences were immediately audible. The 24/96 version presents cymbals with more shimmer and body, snare drum with more sharpness, and fuller, more resolute bass. Waldron’s left-hand chords are more harmonically fleshed out, and I get a much better sense of the dimensions of Tonstudio Bauer, the studio in Ludwigsburg, Germany, where Free at Last was taped. Small details -- strings vibrating against the bass’s fingerboard, subtle drum accents, and Waldron’s use of dynamics, especially in phrases repeated with slight variations -- come out better in hi-rez.

Vinyl gave me a similar level of detail, but with a bit more three-dimensionality. Cymbals were slightly easier to visualize, bass lines had a more woody, organic quality, and the piano’s sound was warmer and thus slightly more engaging. Eckinger’s bass solo is exciting and fiery, and Becton seems to have a bit more force in his solo, especially on kick drum. On the other hand, the level of detail in hi-rez is astonishing. At one point in Eckinger’s solo, I can hear the slight sound of Becton’s drum sticks clicking together, as well as other faint studio noises.

With “Balladina,” I was impressed with the hi-rez version’s presentation of the hard force of Waldron’s opening chord, the texture of Becton’s brushed snare, and Eckinger’s pronounced attack. On all three counts, the sounds of these on LP is more reserved. Waldron’s physical engagement with the piano and Eckinger’s close interaction with him is more pronounced in the 24/96 version. Chords hang in space longer, while individual notes in melodies -- at times gently coaxed, at others more aggressively pushed -- have more nuance, definition, and emotional reach. The subtlety of Becton’s drumming is much easier to appreciate in hi-rez. 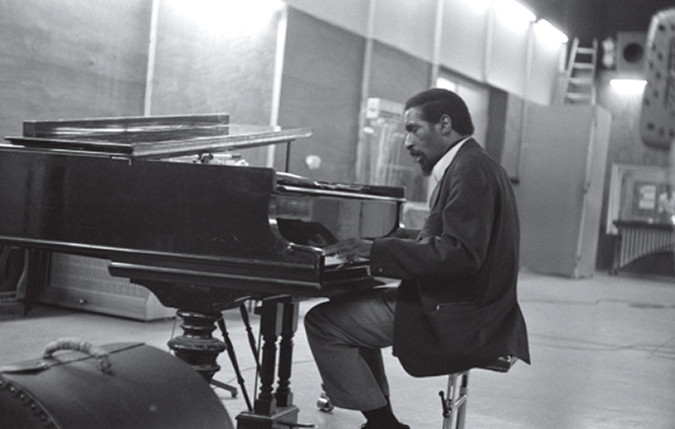 But the LP, again, sounds more organic. Bass notes are more resonant, sounding more as if they’re coming from inside the instrument, and it’s somewhat easier to “see” each drum in its specific, fixed position in space. I also get a slightly better sense of the players listening carefully to and responding to each other -- the clarity and precision of the hi-rez download has me monitoring each player individually.

Waldron’s take on Ann Ronell’s “Willow Weep for Me,” the only standard here -- all other tracks are his own compositions -- reharmonizes the song, giving it a slightly darker cast, and his variations on the melody stress rhythm and percussiveness. I find the LP to have slightly better musical flow and pace, but the hi-rez version is more exciting, and more convincingly places me in the studio with the musicians. I can hear the mechanical workings of the hi-hat, for example, and the bass has tremendous physical presence. In “Boo,” the piano and bass play quick lines together, to spirited drum accompaniment. Both formats give a clear account of this music, but I find it somewhat easier to follow each player’s movements with the hi-rez version.

My overall preference for analog leads me to choose, in almost every case, the vinyl edition of a recording over its digital counterparts, even when the latter are in high resolution. If the digital has been done well, however, my preference is usually slight. In the case of the new LP of Free at Last, I find that I like the qualities I’ve come to expect from vinyl: musical pace, 3D aural images of instruments, timbral accuracy. But with the 24/96 version, what at first seemed analytical has become more bracing and exciting with each hearing, as more is revealed about the tiniest interactions among the musicians and their instruments, and with the space they were recorded in. The 24/96 version of Free at Last gives me a better, clearer picture of what went on in Tonstudio Bauer on November 24, 1969. 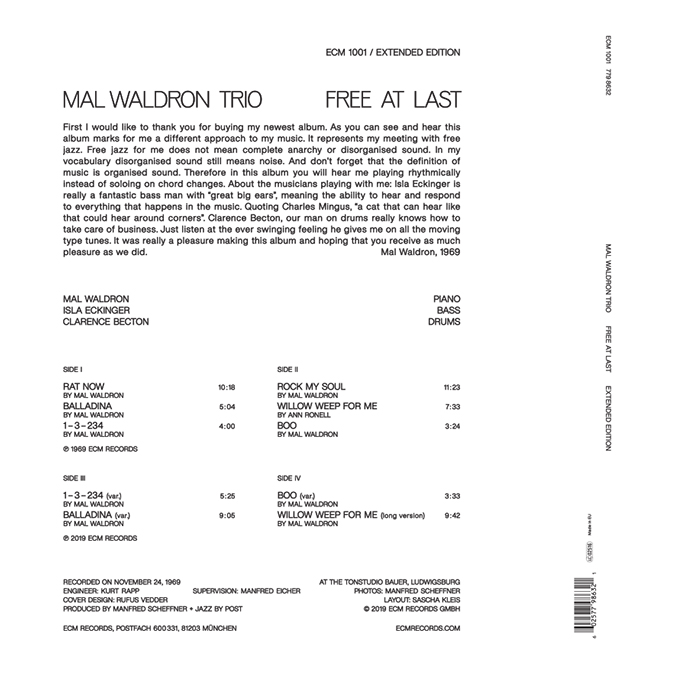 With the LP, you get a gatefold cover with session photos and a large-format booklet with more photos, new liner notes, and reproductions of the charts Waldron wrote for the session. The cover is standard-weight cardboard, and the cover art is nicely reproduced. I wasn’t able to track down who mastered either version, but ECM’s publicist informs me that the vinyl was cut directly from the analog tapes. My ears give me no reason to doubt it.

Free at Last is a solid entry in Mal Waldron’s catalog: approachable, highly rhythmic, musically satisfying. The additional tracks give some insight into how the trio approached the tunes, and make this Extended Edition even more desirable. I also encourage you to pick it up for the sound, even if you already own an earlier version of the album. On vinyl or as 24/96 digital, this remastering pulls me closer to the music and lets me appreciate it more deeply. I suggest you buy both.