Bob Mould is mad as hell and wants you to know it. In an online interview he describes his new album, Blue Hearts, as “the catchiest batch of protest songs I’ve ever written in one sitting.” Even when he’s contented, as he was on Sunshine Rock (2019), Mould plays exhilaratingly loud and fast rock’n’roll. Add anger to the equation and you get, well, punk rock. On “American Crisis,” the first single from the album, Mould and his band sound more like the Sex Pistols or the Clash than anyone else.

Mould lets out a couple of screams over buzz-saw guitars on “American Crisis.” In a statement about the song he asserts that we are now seeing a replay of the ’80s, with “telegenic, charismatic leaders, praised and propped up by extreme Evangelicals.” He also sees parallels between the AIDS crisis and COVID-19. The song is full of fury and fire and it’s terrific rock’n’roll, with Mould and the rest of his band, drummer Jon Wurster and bassist Jason Narducy, singing the chorus with abandon.

Mould begins the album calmly enough, playing acoustic guitar on “Heart on My Sleeve” while singing about environmental disaster and other current problems. “And we’re going to war,” he sings, “and we’re going to die.” Things pick up in volume and speed with “Next Generation,” a call to action and commitment. “One thing I know for sure,” Mould sings, “please pay attention.” 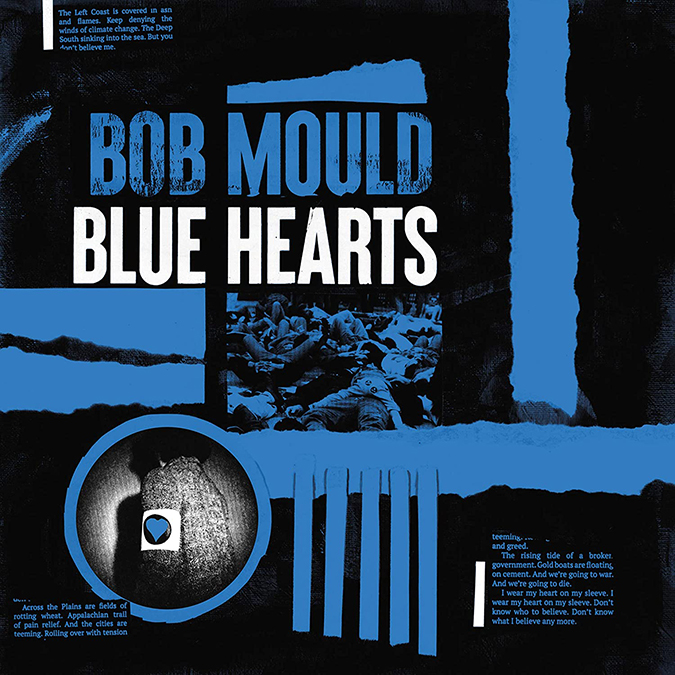 Mould shares his problems with religion on “Forecast of Rain,” and his views are colored as much by his experiences as a gay man as they are by current political conditions. Mould is smart enough to write lyrics that avoid the obvious, for the most part, and I found myself agreeing at some points and trying to formulate answers at others.

While the emphasis on Blue Hearts is protest, Mould also finds time to sing about romance on “Everything to You” and about the toll of age, creativity, and living in difficult times on “Little Pieces.” He documents the breakdown of love in “When You Left” and “Leather Dreams.” While the protest songs convey a strong emotional commitment, all the tunes on Blue Hearts benefit from lyrics that are sharp and observant, even at their angriest. Lines from “Password to My Soul” describe the anxiety everyone is feeling at this point:

This constant state of crisis leaves me frail, afraid, and weakened
I try so hard to hold on, falling off the deep end

Since Mould typically buries his vocals in the mix, it can be hard to pick out what he’s singing. Lines become clearer with several plays, and the messages come through as much in the ways the songs are played as they do in the lyrics. “Heart on My Sleeve” and the moving final track, “The Ocean,” are quieter than the other songs, but the latter closes with a rise in volume and nearly a minute of guitar distortion that ties the record together. The sheer power of the record makes its 35 minutes race by.

Wurster has played with Mould since 2009’s Life and Times. Narducy has toured with Mould since 2009 and been on all his recordings since Silver Age (2012). For all its speed, volume, and distortion, this is a finesse band. Mould is a skilled and rhythmically savvy guitarist, Wurster is fluid and musical even in the busiest passages of the songs, and Narducy has a knack for holding things together with a few well-placed lines. 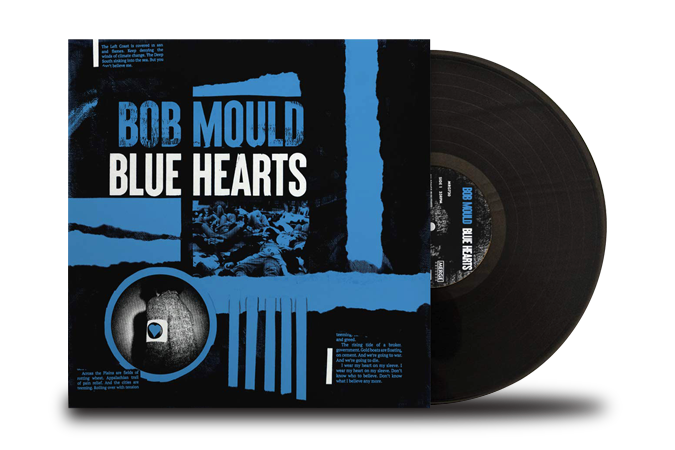 The vinyl copy of Blue Hearts comes with a download card that lets you choose between an MP3 or FLAC version of the album. Kudos to Merge Records for offering both options. The FLAC version was highly detailed, while the vinyl was more layered. Bass was more resolute and powerful on the vinyl, but backing vocals and Mould’s unusual open-chord progressions rang out more sharply on the FLAC playback. I wasn’t able to track down who pressed the LP, but it was flat and quiet.

A danger with protest music is that it can be so topical that it fades quickly. Blue Hearts contains enough songs about Mould’s personal and artistic life to give the record balance. All the tracks show his skill with melody and his surprisingly subtle use of chord changes. The playing on Blue Hearts is impressive and heated and, in truth, the protest songs are so strong that, given history’s tendency to repeat, they’ll come in handy for a while.