I loved High End 2022, this year’s edition of the largest audio show in the world, which took place from May 19 to 22 in Munich, Germany. It was great to be back after two COVID-19 years at home. The show was a smashing success with lots of product introductions and many terrific-sounding systems. You can read the SoundStage! Network’s coverage of the event, which I contributed to, on SoundStage! Global. Also check out Jonathan Gorse’s “Munich High End 2022: The Cream of Analogue,” published in this space on June 1. Jonathan is a devoted vinyl aficionado and had some favorite analog—um, analogue (Jonathan’s a Brit)—products to tell you about. 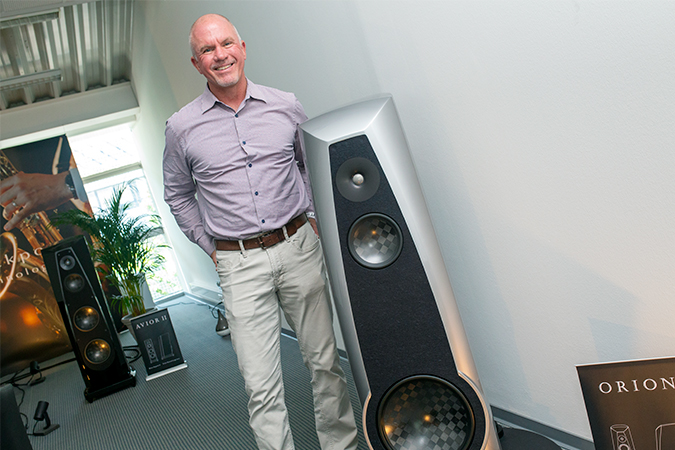 I, of course, have my own favorite products from High End 2022—easily ten or so—but none was more intriguing to me than Rockport Technologies’ new Orion loudspeaker. With all the crazy new products introduced in Munich, you may wonder why this speaker was my favorite.

As with most things, there’s a back story. 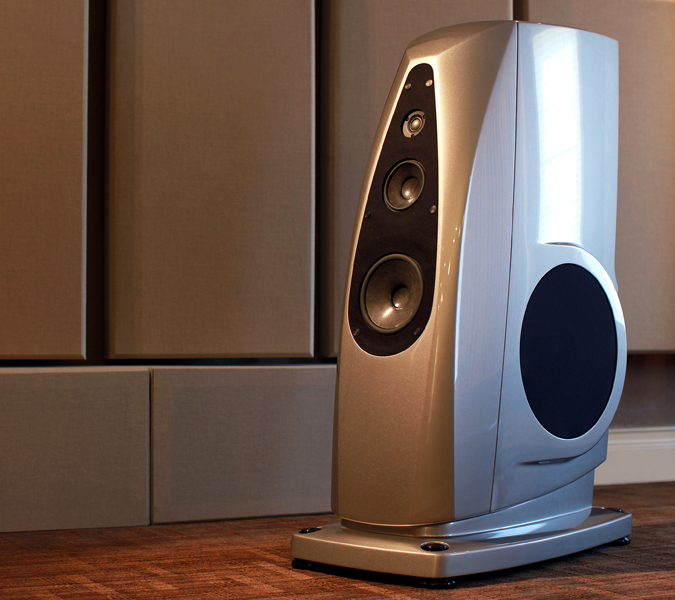 The easiest way to begin this tale is to point you to my 2007 review of Rockport’s Altair loudspeaker, a large—and at 35″, very deep—four-way design that retailed for $89,500/pr. when it was reviewed (all prices USD). The Altair became my reference loudspeaker for about two years following that review. In the Rockport hierarchy at the time, the Altair was slotted in just below the company’s then flagship, the mighty Arrakis (priced at $165,000/pr. in 2007). The Altair represented an exciting product in Rockport’s speaker line because it featured almost all of the Arrakis’s technology and construction methods in a speaker that was essentially a half-sized version of the company’s 900-pound, bleeding-edge flagship. Of the 50-or-so pairs of loudspeakers I’ve had in my Music Vault listening room over the years, I would place the Altair in the top three in terms of the sound quality achieved in that space. And I had just about everything you can think of to compare them against passing through at one time or another. 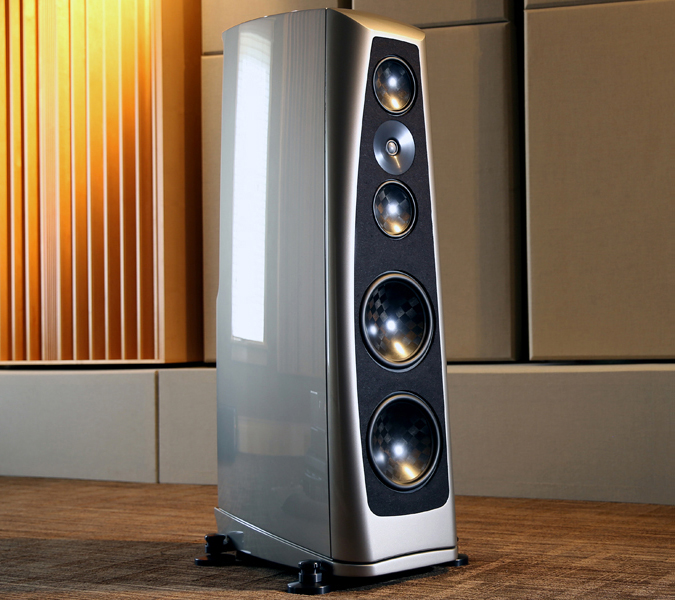 Rockport’s Lyra loudspeaker, priced at $190,000 per pair, is the Maine company’s current flagship (the Arrakis is no longer in production). Although its price is close to that of the original Arrakis, the Lyra is much smaller and lighter (560 pounds vs. 900), and it’s purposefully designed to fit easily into more real-world rooms. Since the Lyra’s introduction in 2016, the speaker below it in the Rockport product line has been the Cygnus, priced at $70,000/pr. With far more conventional construction than the Lyra—basically an MDF-based cabinet with a constrained-layer-damped aluminum front baffle—and a price that’s lower than the Lyra’s by about the amount you’d pay for a nice BMW, the Cygnus needed a bigger brother. There was a wide gulf—in terms of price, construction, and performance—between the Lyra and Cygnus, and the Rockport brass recognized this.

The speaker slated to fill that gap has been under development for several years now. At High End 2022 the Lyra’s slightly smaller sibling was finally unveiled.

Enter the Orion, which, at $133,000 per pair, nicely fills the price gap between the Cygnus and the Lyra. A first glance reveals the Orion to be a three-driver, three-way floorstander. When asked why he designed the Orion as a three-way, Rockport founder Andy Payor offered this explanation: “The primary design goal for the Orion was to create the simplest, purest expression of a truly full-range dynamic loudspeaker, which required a three-driver, three-way design.”

The nuts ’n’ bolts of the Orion are impressive, if on the surface quite conventional. This is how I described the driver complement in my Munich coverage: “The drivers housed in the Orion’s unique cabinet include three new bespoke designs: a 1.25″ beryllium-dome tweeter mounted in Rockport’s custom waveguide, a 7″ midrange with a carbon-fiber-sandwich diaphragm, and a massive 13″ bass driver. The 13″ woofer is the largest bass driver in the current Rockport line.” 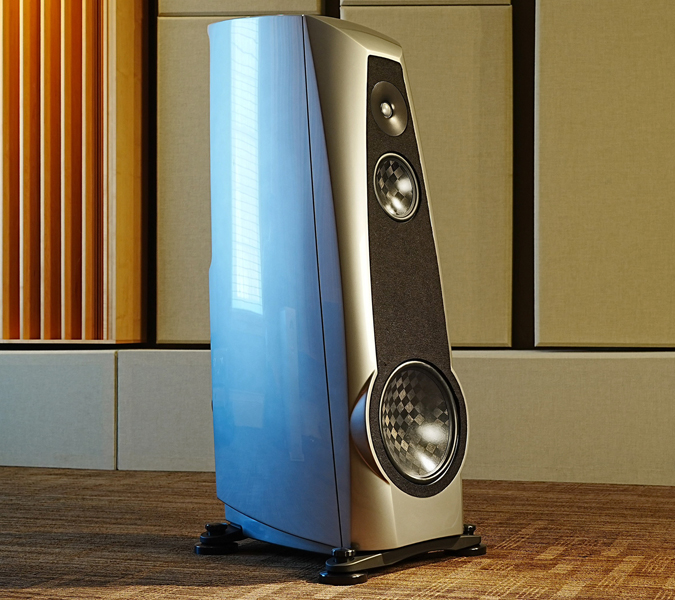 The Orion stands 50.3″ tall by 14.3″ wide (20.3″ with feet and outriggers installed) by 26.4″ deep (which is much shallower than the Altair). Each speaker weighs 360 pounds. So it’s a large three-way loudspeaker with bespoke Rockport drivers and all the classic Rockport quality elements, including a hand-tuned crossover and construction supervised by Payor and Rockport’s president and owner, Josh Clark. If that were all there was to this speaker, you could rightly ask why the Orion costs $133,000/pr.

Only three elements? That seems rather simple, right? Well, no, there’s actually much more going on here. The combination of cast aluminum, carbon-fiber shells, and the damping agent and epoxies that bond all of it together, creates a cabinet that needs no fasteners to assemble. It’s the way Rockport fabricates these disparate elements and combines them to create the beauty that is the Orion that needs further explanation.

Rather than presenting you with a multi-paragraph description detailing the work that goes into making an Orion, and knowing that, in this case, photos are worth many thousands of words, I’m including a step-by-step photographic tour of the Orion enclosure’s crazy construction process. 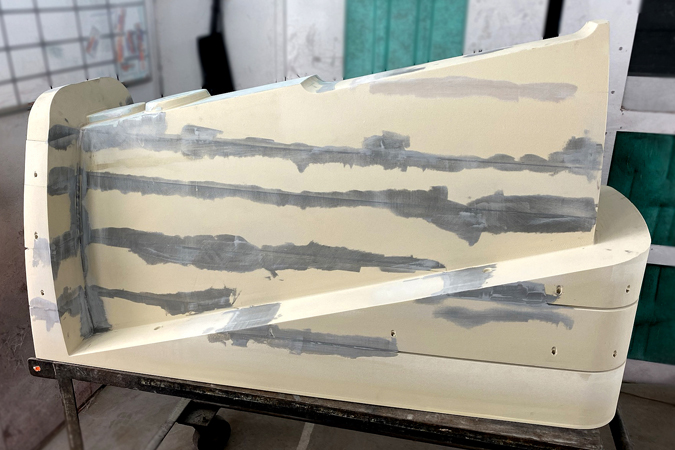 Layers of high-density urethane are laminated to form the male pattern of the outer carbon-fiber housing. 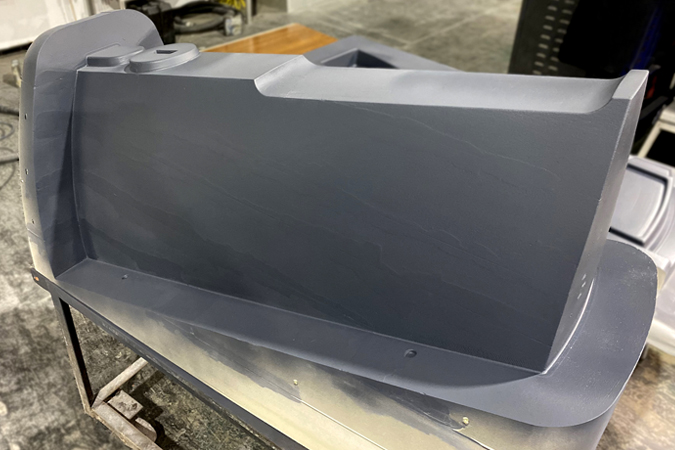 The male pattern is sprayed with a high-solids primer and faired out (a sanding process to make a perfectly smooth surface) in preparation for making the female mold. 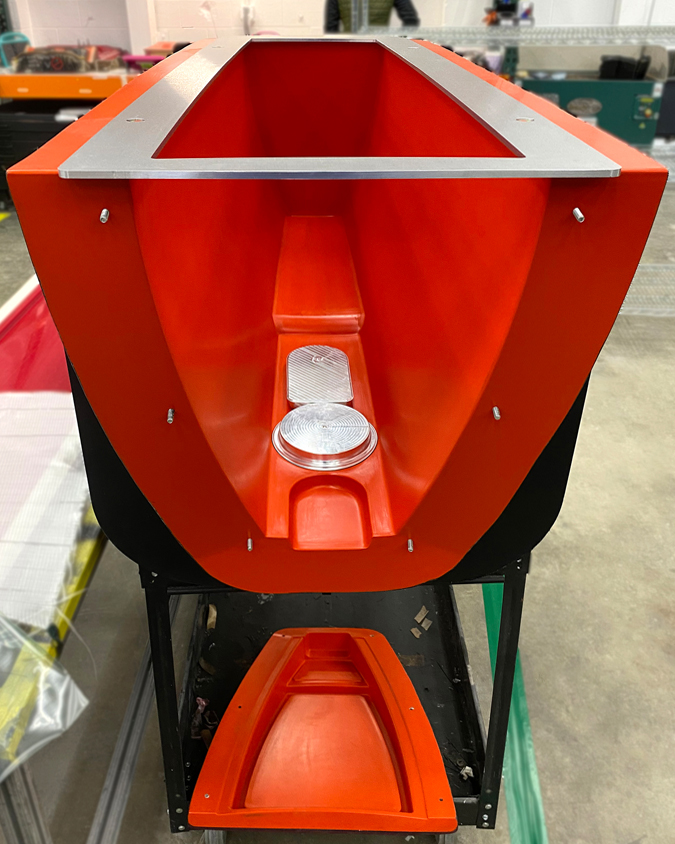 The female tool, which is manufactured from the male pattern, shows the return flange closure plate and machined-aluminum mold secondaries for the terminal plate and port recesses. The lower portion of the female tool can also be seen with alignment bolt holes. 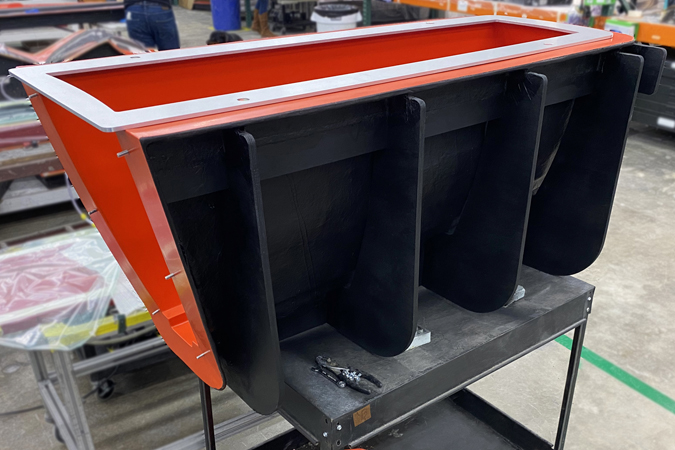 The female tool showing the outside structure, engineered to maintain tool geometry during manufacture. 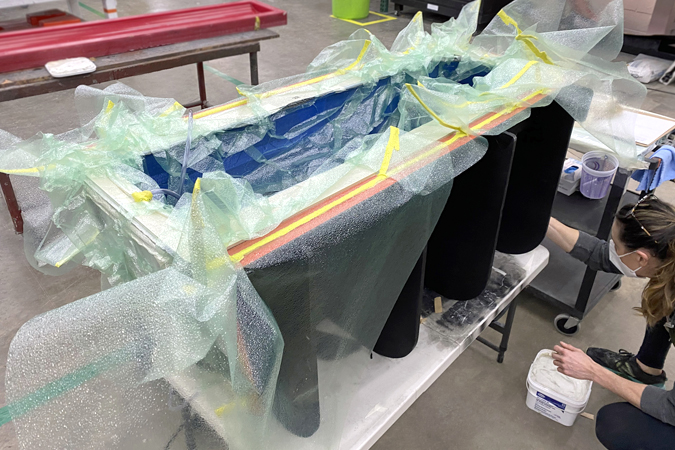 The carbon-fiber rear housing being vacuum-infused with epoxy resin. 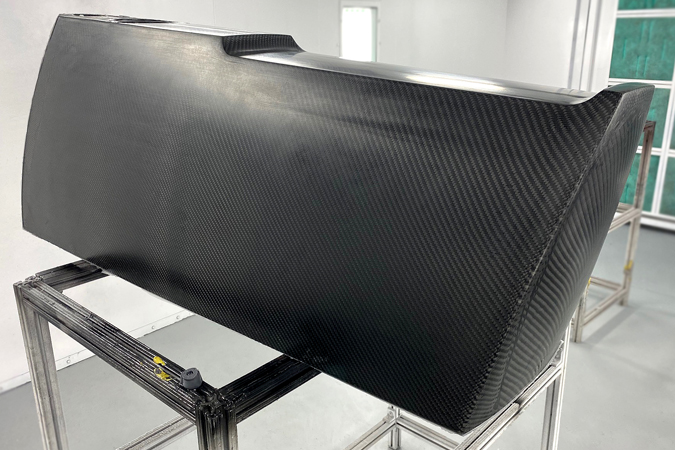 A carbon-fiber rear housing right out of the tool before trimming. 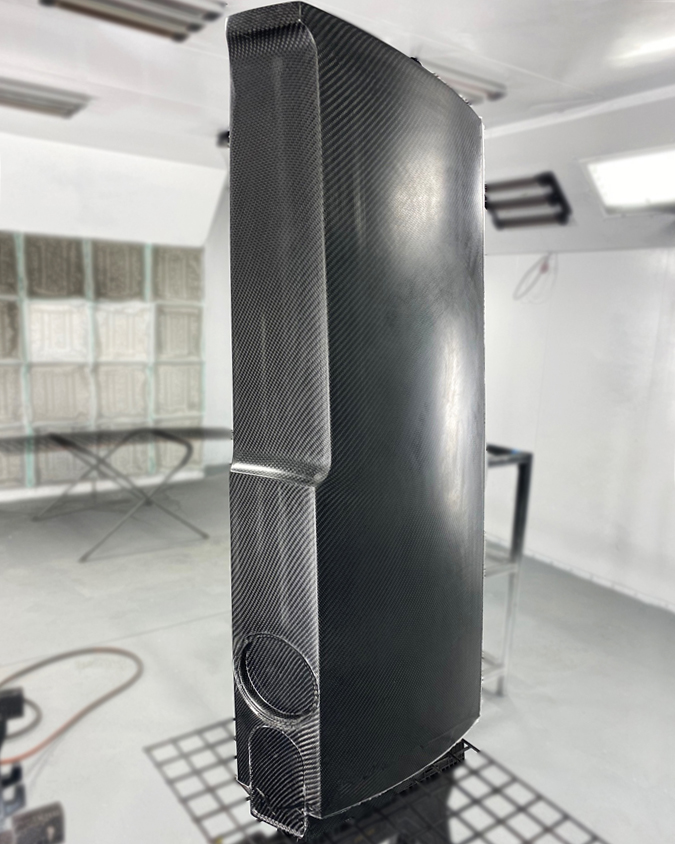 Rear view of a carbon-fiber rear housing before trimming. 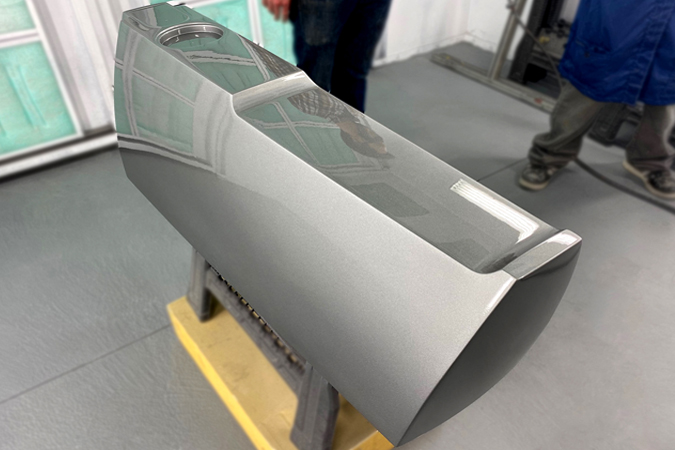 A rear carbon-fiber housing primed, and faired, with a base coat applied is then sprayed with multiple layers of clear coat prior to sanding and polishing. 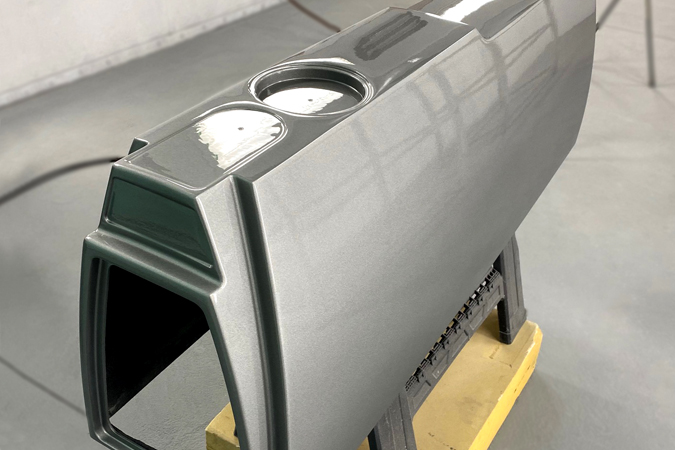 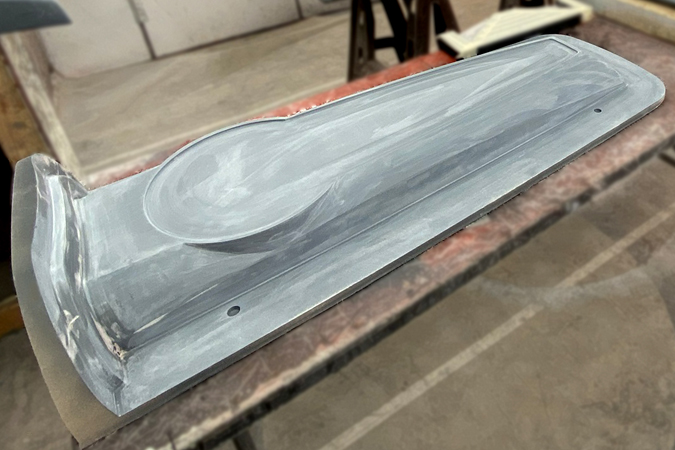 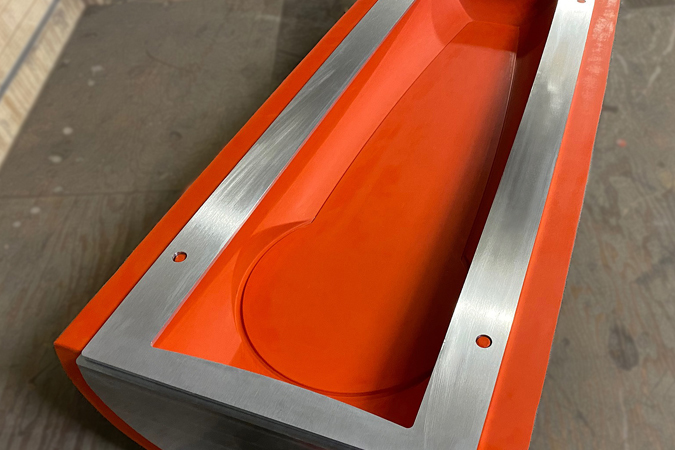 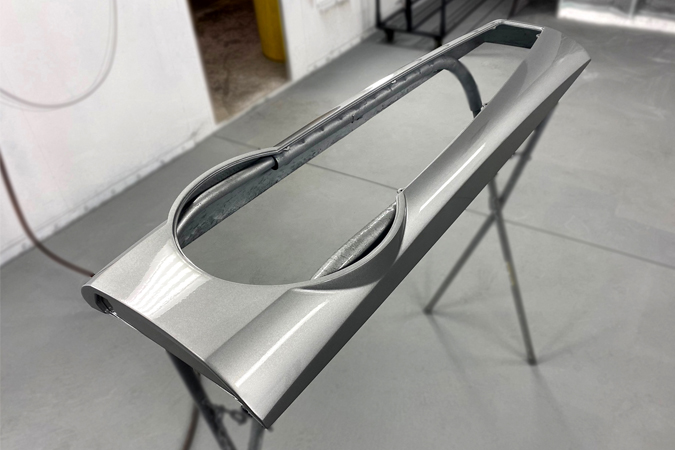 A carbon-fiber baffle with a large aperture is CNC trimmed, primed, and faired, after which base coat is applied. Multiple layers of clear coat are sprayed on before the cabinet is sanded and polished. 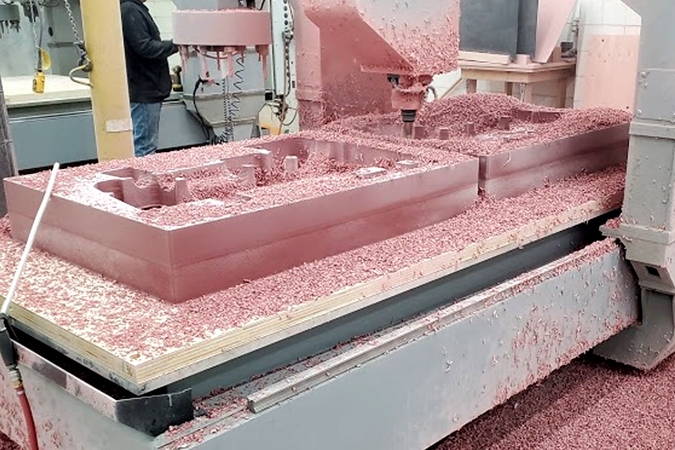 Machining of the rigid epoxy tooling for the inner-aluminum casting. 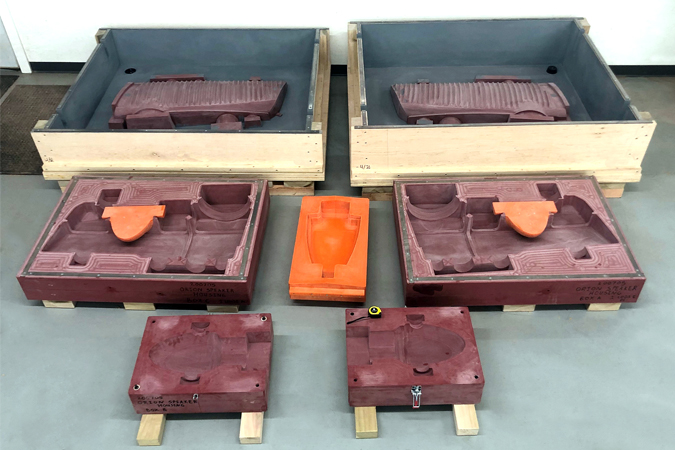 Here you can see all of the machined tooling for the inner-aluminum casting. 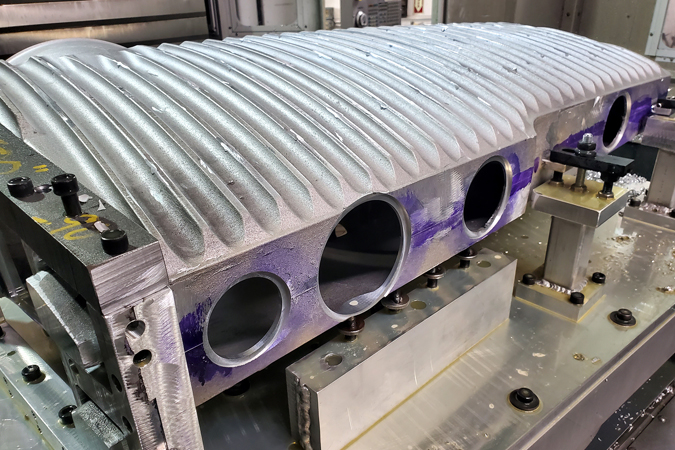 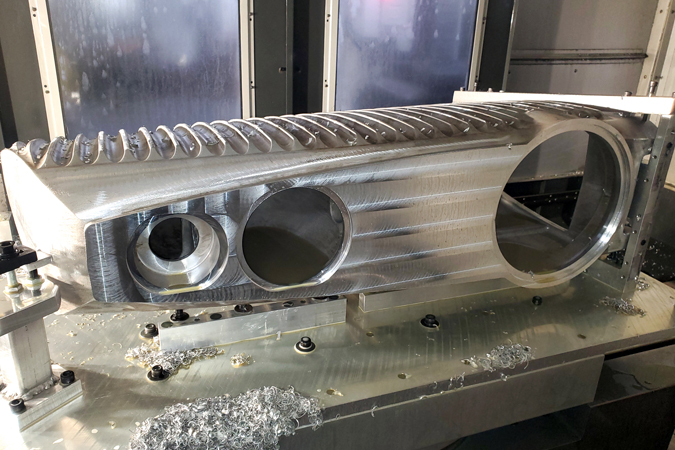 CNC machining of the front panel of the aluminum housing to create drive-unit recesses and alignment features, as well as “drill and tap” for driver mounting. 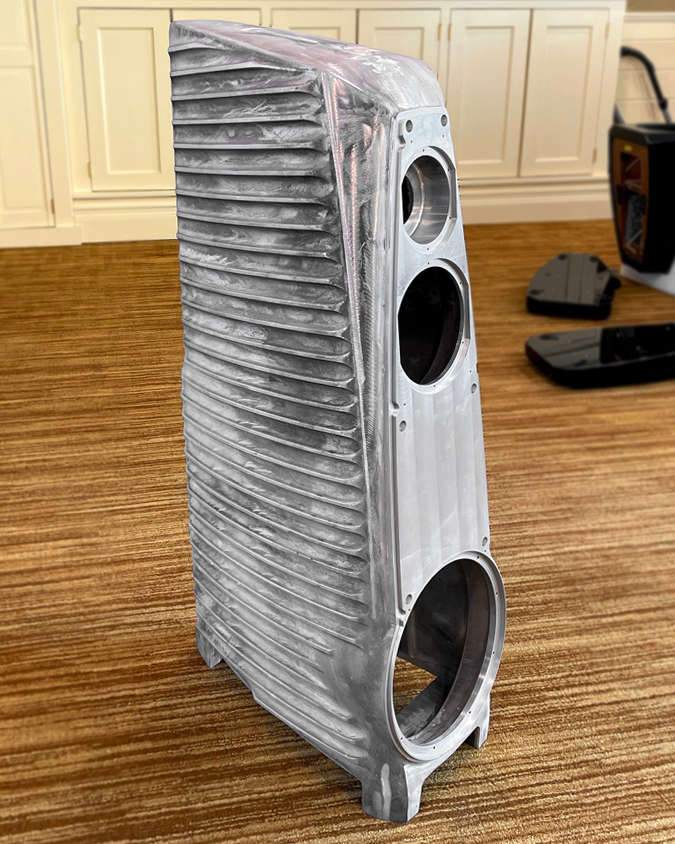 The highly complex, massive inner aluminum housing with Alodine surface treatment to passivate the aluminum and promote excellent adhesion to the core. This one is ready to assemble.

Of course, final assembly and finishing are processes unto themselves. Then you have the acoustic measurements and associated crossover tuning before the final listening tests. Once a pair of Orions are ready to go to their lucky owner, you can rest assured that Andy Payor and Josh Clark have both put their stamp of approval on the final product.

The Orion appears to be a worthy successor to the Altair—and then some. Not having heard a pair yet, I can’t say for sure—although initial reports from Maine are over the moon. What can’t be debated, though, is that Rockport Technologies continues to reach for the stars in the super-high-end loudspeaker space. To say that I can’t wait to hear a pair would be a gross understatement.