The Sound I've Been Searching For

Although I can’t pinpoint the exact date, the last time I was satisfied with my stereo system was sometime in early 2017. I had a pair of Magico Q7 Mk.II speakers driven by a Soulution 711 stereo amplifier. My digital source was a Soulution 560 DAC-preamplifier, and interconnects and speaker cables were Nordost Valhallas. That ca.-$400,000 system was assembled in my listening room, the Music Vault, and tweaked with excruciating attention to detail. The sound was all that I could hope a system of that pedigree could produce -- it was sublime.

I was ready for that change, as I wrote with great satisfaction in July 2017, in the first installment of “Jeff’s Getting a New Stereo System.” Ever since, I’ve planned for and searched for a sound I could be happy -- no, thrilled with.

Now, almost two years later, I can say, with a big exhalation of satisfaction, that I’m finally there. In fact, only in this past week have I at last felt that the system has sonically come together the way I’d hoped it would.

This might sound weird (aren’t all audiophiles a bit weird?), but for me to really enjoy the sound of my system, I need to be happy with more than its sound. If you’re a car enthusiast, you know that a clean car drives better than a dirty one. A similar tidying-of-things approach applies to my audio hobby. I like it when my room and the components in it are squared away. Call these details a prerequisite to my audiophile bliss.

Examples abound. My room measures well acoustically, it looks as a listening room should look to me, and is comfortable to be in whether I’m relaxing or working. I detailed the process that it took me to get there in “A Measured Approach to Room Acoustics,” published last month. The final detail I added was an 80-pound slab of Pennsylvania Bluestone to serve as a platform for my Boulder 2060 stereo amplifier. In addition to its simple look, this fine-grained, naturally blue sandstone is flat, dense, and stable, allowing the Boulder’s multi-element, constrained-layer feet to effectively do their job of isolating the amp from vibrations. 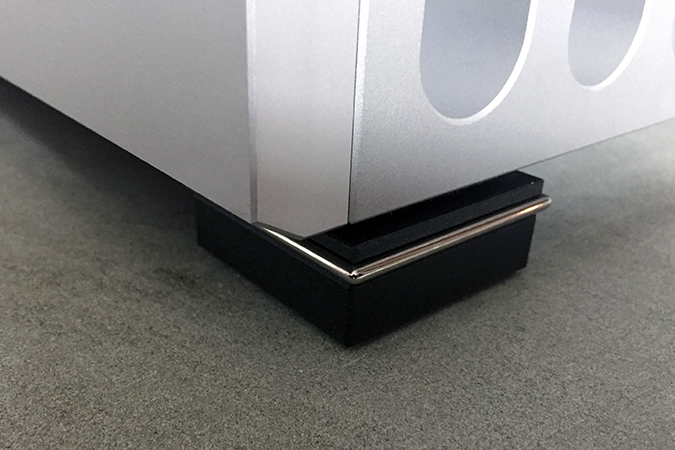 Years ago, Magico’s founder, Alon Wolf, told me that a speaker’s drive-units “should never be screwed into MDF.” Not only do I agree with this simple design tenet, I’ve adopted it as my own across other aspects of speaker construction as I examine review samples. Take, for instance, speaker footers. Have you ever seen footers that screw directly into the MDF base of a loudspeaker? I have, on many occasions, and it drives me crazy. Metal inserts embedded in the MDF that accept machine screws aren’t much better, though they’re the norm. Like screws, those inserts can pull right out. 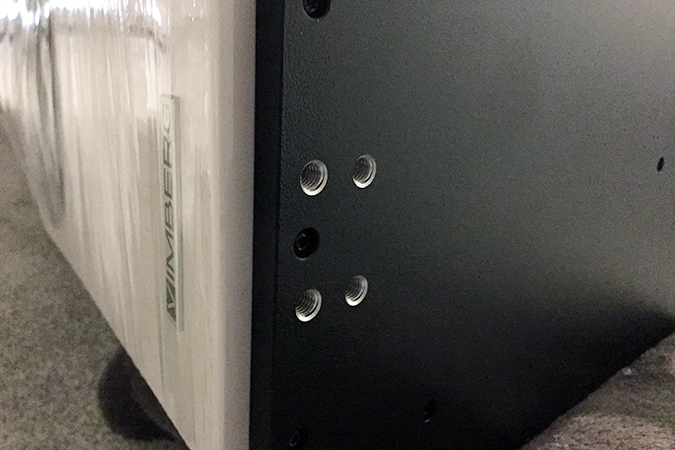 Jorn Janczak, chief designer for German speaker manufacturer Tidal-Vimberg, evidently agrees. One detail of my Vimberg Tonda speakers so impressed me that I have to share it with you: The baseplate of each speaker is a thick slab of aluminum. I’d be plenty happy if the outriggers included with each speaker screwed directly into the aluminum -- that’s far better than screwing into MDF. However, Janczak has gone his aluminum baseplate one better, in a detail few would notice: Embedded in the baseplate are stainless-steel inserts that accept the screws that secure the outriggers -- no fewer than six screws on the one-piece rear outrigger. Stainless steel is much heavier, denser, and stronger than aluminum, and is a much more robust material for this job. Knowing that those outriggers must support each speaker’s 212 pounds as it’s being moved into place means that the method of attachment needs to be very strong. The Tondas are straight-up built. That Vimberg attended to this detail makes me happier with my speakers, and that improves the quality of my experience of owning them.

By now you know that I bought new Vimberg Tonda speakers and a used Boulder 2060 stereo amplifier. Those components form the heart of my new stereo system. I haven’t yet bought a DAC, but I now have a prime candidate that gives me the sound I’ve been looking for: the Auralic Vega G2 streaming DAC-preamplifier, which I write about this month. At this point, I’m tempted to just go ahead and buy one. At a retail price of $5999, it’s within my budget, and, as you can read in my review, it checks the boxes on my must-have list for a digital source component. The biggest box on that list is, of course, sound quality -- and the Vega G2 sounds fantastic. My only real hesitation in sending a check right now is the existence of the new MSB Discrete DAC ($9950). If I were still in the Music Vault with six-figure speakers, I’d probably have one of MSB’s more expensive DACs with built-in volume control. Although there’s no way one of those models -- the Premier, the Reference, or the Select -- are in my future, I do wonder how much of their sound quality has been distilled into MSB’s new baby. More important, I wonder if the Discrete sounds better than the Auralic. Before making my final purchasing decision, I have to hear one. 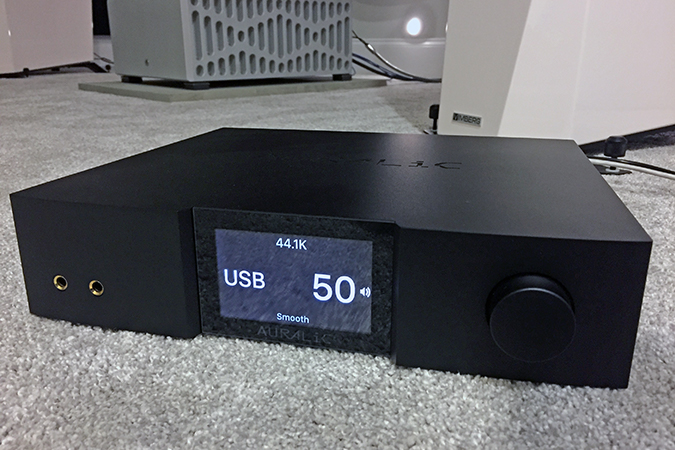 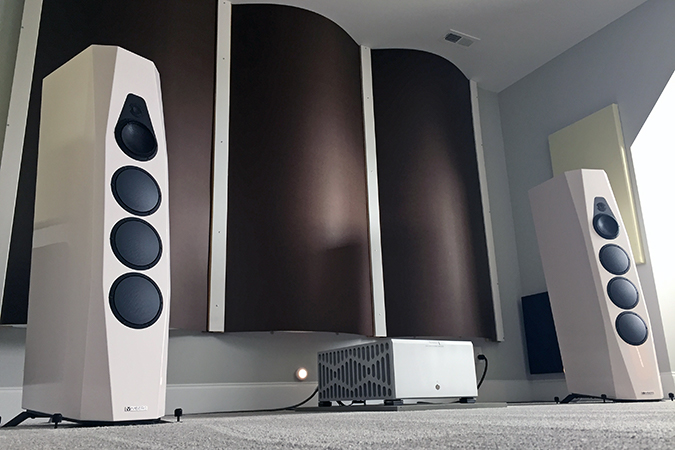 So, what am I hearing these days? Glad you asked!

Some general characteristics of the sound of my new system: It’s dead quiet. Music emerges from apparent deep space. The Boulder power amp is silent, mechanically and, when I place an ear next to a Vimberg tweeter, electronically. Very few amplifiers not named Devialet can pull off this trick, but the Boulder does, while sounding completely involving and devoid of electronic artifacts. It just amplifies the music. The Auralic is not completely silent -- I can hear something with my ear next to the tweeter screen -- but it’s as close to that ideal of silence as I’ve heard from a DAC.

Such excellence of electronic design lays the groundwork for the real stars of the show, the Vimberg Tonda floorstanding loudspeakers. When I began this downsizing journey, after years of owning six-figure flagship speakers, I didn’t think I could be this happy with speakers costing under $40,000/pair. But these German beauties retailing for a “mere” $38,000/pair have exceeded my expectations in virtually every parameter of sound. First, the Tondas cast a soundstage that’s large in all dimensions -- width, depth, and height -- and stretches beyond my room’s walls and ceiling. What they do differently from all other speakers I’ve owned and liked is how they paint aural images on that soundstage. Individual performers aren’t only precisely placed -- “she’s right there” -- but are formed more clearly, more fully, than I’ve ever heard from a speaker. Yes, that’s right: ever heard. 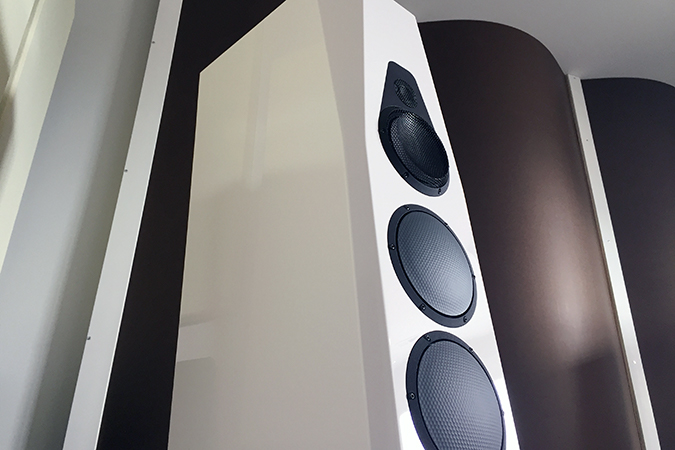 This aspect of the sound makes for stunningly realistic reproduction of music. I was listening to the title track of Stars Aligned, by trumpeter Martti Vesala’s Soundpost Quintet (16-bit/44.1kHz FLAC, Ozella/Qobuz). This is a fairly busy jazz recording, but what I marveled at was how fully formed Ville Pynssi’s drum kit was, just to the left of and behind the other players. I could easily hear, and just as easily visualize the action each time his stick struck a cymbal. But uniquely, I could also “see” how high each cymbal was above the floor. This precision of positioning within the larger, three-dimensional aural image of the drum kit was mesmerizing. I heard similar things with many recordings I played. Now that I’ve heard it, I can’t see myself ever doing without it.

Nor are the Tondas one-trick ponies. Their overall sound quality is exceptional. Bass is deep and taut, with no hint of boom or overhang; highs are delicate and complete, yet never heavy or biting. Through listening and, later, measurement, I came to understand that these speakers are extremely linear, easily matching the most neutral speakers I’ve ever had in one of my systems. The Vimbergs can play big, too, with effortless clarity, and at sound-pressure levels that would break many speakers. With the Tondas coupled to super-quiet electronics like the Boulder-Auralic pairing, I hear subtlety and nuance that are, in my experience, unrivaled in a speaker anywhere near this price.

The Tondas’ ability to project fully formed aural images extended to the reproduction of space. When I played a disc of Handel’s Italian Cantatas performed by soprano Sabine Devieilhe, mezzo-soprano Léa Desandre, and Le Concert d’Astrée conducted by Emmanuelle Haïm, I was mesmerized by the Tondas’ creation of an illusion of space not just around the performers, but of the space around that space -- the ambience surrounding those entirely “visible” aural images was so tangible that it melted away the walls of my listening room.

I’m absolutely thrilled with the Vimberg Tondas. They’ve answered a question I’ve been asking for two years: Can I be happy downsizing the retail price of my system? Yes, I can -- and without downsizing the enjoyment I get from listening to music. And that’s a fine point to ponder, indeed.